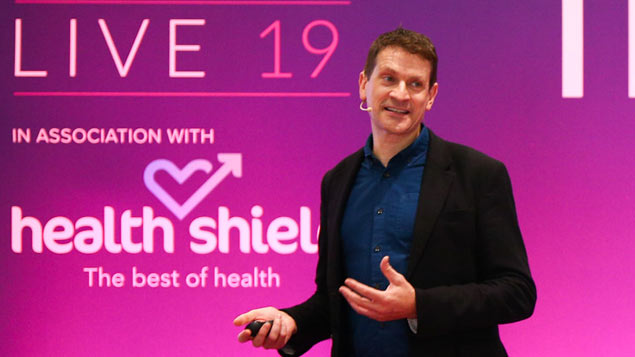 Twitter's Bruce Daisley said preparing for the future of work should be less about tech and more about human experiences. Image: Employee Benefits

Employers should think less about new technology and more about improving the “human experience” when considering the future of work, according to a workplace culture expert.

Bruce Daisley, EMEA vice-president at Twitter, said organisations needed to understand more about psychological factors like how people think, work as a team, relax, settle into a new role and feel like they belong at an organisation if they want to improve their staff retention and tackle feelings of “burnout”.

If we treat improving work as an exercise in improving humanity, the human experience, I think we’re probably more likely to achieve a great outcome,” – Bruce Daisley

Speaking at the Employee Benefits Live conference this week at London ExCeL, Daisley said: “It’s very easy to think the future of work is about the next technology you employ or the next app you get your employees to do. I think all of the evidence says very much the opposite of that.

“When we’re thinking about the future of work, we need to think about how we bring the humanity back into our jobs. If we treat improving work as an exercise in improving humanity, the human experience, I think we’re probably more likely to achieve a great outcome.”

He gave organisations five ways they could improve the employee experience and bring “joy” back into work.

The first, understanding how human beings think, would help reduce employee burnout and increase productivity. “If your employees are going to back-to-back meetings, when if the opportunity to get anything done?” Daisley asked.

The next was understanding the effect working as a team has on staff. He used an example of a rowing experiment: higher levels of endorphins were recorded in the group that was asked to row the boat in synchronicity than the group that rowed in a different pattern, indicating that the group that worked as a team felt more connected to each other.

The third point was understanding the effect of taking sufficient breaks from work on productivity. Daisley highlighted research involving the Bank of America, which found a 23% improvement in productivity when staff were able to take breaks together. This was because staff were given the opportunity to discuss any concerns about their role and techniques they had learned during break times, which they then brought into their roles to improve their performance.

Understanding how staff settled into an organisation was the next technique Daisley discussed. He gave the example of a call centre where new starters were asked during an induction activity what lead to their “happiest” time at work. Those who had taken part in the activity had a 50% higher retention rate after 12 months than those who did not.

Finally, Daisley said employers needed to understand what made staff feel like they belonged at an organisation. “It’s a human need, so we need to incorporate it into our working environments,” he said.

Employers were encouraged to pay particular attention to remote workers, who might feel less connected to their work than those based on the premises. He advised setting aside five minutes at the beginning of video meetings, conference calls and face-to-face discussions to allow staff to talk and “connect with each other more”.

He said that last time he attended Employee Benefits Live six years ago, staff wellbeing had only just made its way onto the agenda. Average employee turnover was at 10%, compared to 16% today, “In my view, it’ll only go up,” he said.

One organisation that has focused on developing a wellbeing strategy to attract and retain staff is the Co-op, particularly focusing on financial wellbeing.

Over the past two years it has introduced a rent deposit scheme, loans, gambling support and access to support from a debt management charity, among other financial benefits.

Staff who use one of its financial wellbeing benefits are now 50% less likely to leave than those who don’t.

The Co-op’s people director Gary Dewin advised employers to “use the whole reward budget and think about how it can be repurposed in a nontraditional way”. For example, taking a penny off employees’ hourly rate could help fund wellbeing benefits would help release significant funding without affecting employees too greatly.

With so many financial wellbeing products on offer it is important to find out what would benefit employees the most, advised Alison Balson, director of workforce at Wrightington, Wigan and Leigh NHS Foundation Trust.

“Start with what’s really important to staff,” she said. “Then you can add ‘nice-to-haves’ on later”.