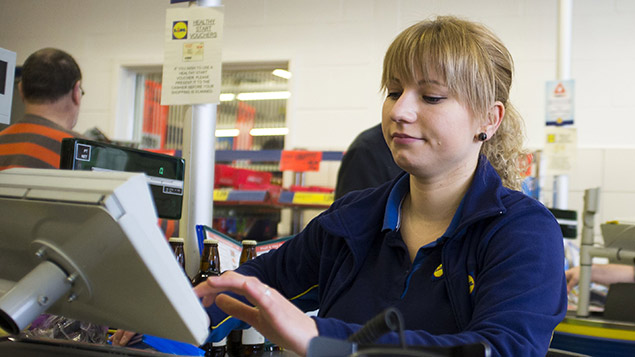 Around 9,000 staff will receive an average wage increase of £1,200 a year. Photo: Photofusion/REX

Retail chain Lidl will be the first UK supermarket to implement the minimum wage suggested by the Living Wage Foundation (LWF).

The new pay rate equates to an average wage increase of £1,200 a year, according to the supermarket chain, with 9,000 staff benefiting from the rise.

The LWF is due to announce a further change in recommended rates in November, and Lidl has said it will adjust its rate accordingly if this increases.

The Living Wage set by the LWF is an informal benchmark aimed at reflecting the rate needed to achieve a reasonable standard of living, rather than a statutory minimum rate.

In this year’s budget, Chancellor George Osborne announced a new national “living wage”, which comes into effect next year.

Employers will be legally obliged to pay this rate, and the Low Pay Commission will recommend future rises, with the Government aiming for it to reach £9 an hour by 2020.

Lidl UK chief executive Ronny Gottschlich said: “Lidl employees will be amongst the best paid in the supermarket sector.”

However, retail is one of the sectors most concerned about the impact of the Government’s new “living wage” on salary bills. A recent study from the Resolution Foundation found that, while the new statutory minimum will have modest impact on most industries, this impact would be much bigger for retail and hospitality as more workers are affected.

Earlier this month, Oliver Bonas became the first high-street retailer to commit to the Living Wage.

Rhys Moore, director of the Living Wage Foundation, said that Lidl’s announcement was “a massive breakthrough in the living wage campaign”.