One in six workers are in insecure, low-paid jobs 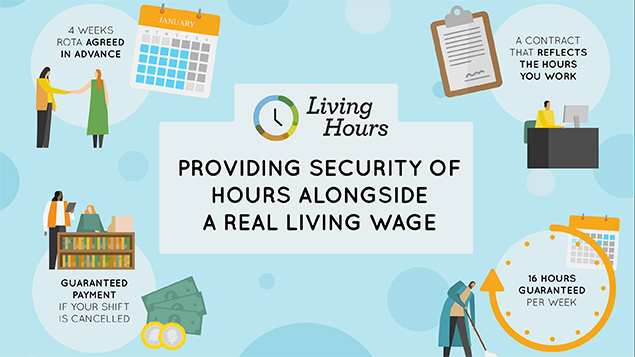 One sixth of UK workers – around 5.1 million people – are in insecure, low-paid work, according to new research.

The news comes as the Living Wage Foundation launches a major new initiative – “Living Hours” – to tackle widespread insecurity over hours and provide workers with real control over their lives.

The scheme will require organisations to pay the ‘real’ Living Wage – currently £9 per hour outside London and £10.55 inside – and commit to provide workers with at least four weeks’ notice of shifts, a contract that accurately reflects hours worked and which guarantees a minimum of 16 hours per week.

Organisations that agree to these measures will be accredited as Living Hours employers alongside their Living Wage accreditation.

The research found that, of the 5.1 million, two million are parents, while of the workers aged 16-24 years, 22% are in low-paid, insecure work.

While young people are the worst affected, the research found that 46% of people working in insecure, low-paid roles are over the age of 35.

Katherine Chapman, director of the Living Wage Foundation, said: “The Living Wage has put almost £1bn extra into the pockets of more than 200,000 workers, but it’s increasingly clear that pay is not the only driver of in-work poverty. A lack of secure, stable hours is leaving millions of families struggling to keep their heads above water. This isn’t good for workers or businesses.

“Constant uncertainty over the number of hours, timings of your shifts or the amount of pay you’ll get each week places people under enormous pressure. A shift cancelled at the last minute might sound small, but it can be the difference between being able to pay for your family’s dinner that night or going hungry. And being expected to work at short notice means you can’t plan around other costs and commitments.

The Living Wage Foundation consulted with hundreds of workers, employers and trade unions in drawing up the new initiative. “We believe Living Hours will provide an important new measure to fight in-work poverty and to provide workers and their families with stability and security,” added Chapman.

Major Living Wage employers including TV and hi-fi retailer Richer Sounds, the energy company SSE and Standard Life Aberdeen have committed to sign up to the scheme with other employers expected to sign up over the coming months.

Julian Richer, managing director of Richer Sounds, said: “If you treat the people who work for you well, you’re going to have happier, more motivated staff, and ones that stay with you for years. That makes a huge difference, and that’s what I’ve found paying the Living Wage.

“We just need more businesses to realise this. Offering Living Hours is a great way to provide workers with security, but it’s also going to help businesses in the long-run.”

John Stewart, HR director of SSE, said: “This brand-new campaign to create an employer culture of Living Hours has the potential to do so much more and as a business we are very proud to be a part of it.”

2 Responses to One in six workers are in insecure, low-paid jobs