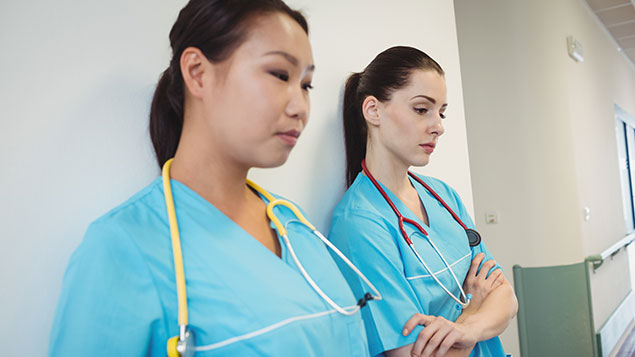 Staff shortages have led to the rise of a blame culture among nurses, most of whom say they are unable to provide the level of care they want to patients.

The 2019 Royal College of Nurses employment survey published today (28 November 2019) also revealed that three in every 10 nurses have suffered physical abuse from patients or their relatives in the past year and only a quarter said their pay was commensurate with the levels of responsibility and stress they faced at work.

One consequence of the staffing shortage, researchers learned, was that 37% of nurses were actively looking for a new job.

Respondents to the survey, carried out every year since 1986, worked in NHS hospitals, community nursing, care homes and in GP practices.

How burnout is affecting the UK’s doctors

The rise in blame culture resulting from workplace pressures was a particularly notable theme in the report with individuals increasingly being singled out for perceived mistakes and reporting feeling a high level of vulnerability.

Respondents reported having decisions taken out of their hands by managers without medical expertise who would then blame medical staff when things went wrong as a result. Another NHS staffer reported that being a single nurse in a 24-bed unit led to a high risk of errors yet the blame always fully was placed on the nurse. They said: “It’s like they expect us to be superheroes.”

Among the key findings of the 2019 survey were:

The study presented as a “typical response” a quote from one nurse in acute care in the north west of England. She said: “All I do is go to work and sleep, and the occasional cooking and tidying my house. We are expected to do so much training but I never get time to do it and I end up doing this in my spare time.

“I love being a nurse and [it] is all I want to do for the rest of my life, but I am looking at relocating to another country where I can have a better life-work balance and where I can look forward to going to work.”

With 43,000 nursing vacancies in the NHS in England, the findings, said RCN chief executive and general secretary Dame Donna Kinnair, laid bare the serious consequences of overwork in the sector.

She was highly critical of the government: “Failure to increase nurse numbers isn’t inevitable, but a political choice. We need proper financial help for nursing students in every nation of the UK in order to ensure the supply of nurses in the future, and clear legal duties for governments and NHS leaders across the UK to ensure there are enough nurses to provide safe care to patients.”

Kinnair added: “At its best, nursing gives people a sense of identity, pride, achievement and a huge sense of fulfilment. But our findings show that the pressures on staff are becoming so overwhelming that we risk losing more nurses from the already depleted workforce.”

The pledge included 14,000 new nursing training places supported by bursaries and 5,000 more nursing apprentices. There would also be 12,500 recruits from abroad who would be required to pay the £464 visa charge and an annual £400 surcharge (soon to rise to £625 a year for all non-EU migrant workers ), branded the “nurse tax” by critics.

Kinnair said the 43,000 shortage of registered nurses could only be filled by people with degree-level education. She added that the Conservative figure of 50,000 was the right level of aspiration and called for more help from the government for students: “The current double whammy of both tuition fees and living costs for a nursing degree are a barrier to many wanting to pursue a nursing career, so we need additional funding for both elements, not just living costs as the Conservative manifesto proposes.

“Forcing would-be nurses to pay tuition fees has demonstrably failed in the last two years. With this announcement, Boris Johnson has not brought back the bursary – he is pledging to return one element of the package and keep the costly tuition fees in place.”

During a visit to West Cornwall hospital yesterday, one nurse asked prime minister Boris Johnson: “Do you have a nurses tree too?” Another asked “Where are these people going to come from?”.

The RCN was among signatories of a letter sent to the prime ministers this week demanding the nurse tax be scrapped.

A further report on the NHS workforce, by the Health Foundation, was published yesterday highlighting how the NHS was having to increasingly rely on less-skilled clinical support staff to fill gaps because of the nurse shortage. Kinnair commented: “It is unfair on healthcare assistants to ask them to take on work they aren’t trained or paid for in a desperate bid to plug gaps.”