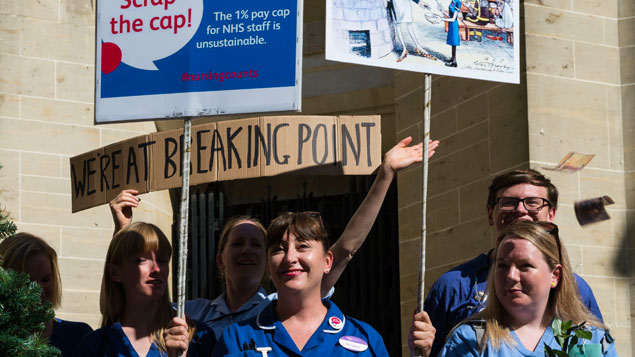 The NHS is on the verge of a staffing crisis, according to the Royal College of Nursing, with more nurses leaving the organisation than joining last year.

Figures from NHS Digital showed that around 33,000 nurses left the NHS in England last year. Around 20% more nurses left in the year ending September 2017 than in 2012/13, with leavers outnumbering those recruited by approximately 3,000.

More than half the nurses that left the profession (17,207) were under the age of 40. Many left the NHS in favour of the private sector, including agencies, pharmaceutical firms and hospitals.

Although the NHS has long warned of staff shortages, with the issue sparking renewed concern over Christmas as A&E patients experienced long delays in hospital waiting rooms, more than 10% of the nursing workforce left the NHS in each of the past three years.

In order to curb the number of leavers, the Royal College of Nursing (RCN) has called for pay rises and more support to help alleviate the strain from their increased workload.

RCN head Janet Davies told the BBC: “The Government must lift the NHS out of this dangerous and downward spiral.

“We are haemorrhaging nurses at precisely the time when demand has never been higher.

“The next generation of British nurses aren’t coming through, just as the most experienced nurses are becoming demoralised and leaving.”

In its submission to the NHS pay review body in December, the RCN called for a pay rise in line with inflation, plus an £800 flat rate increase for staff on the NHS’s “agenda for change” contracts, which exclude doctors, dentists, apprentices and some senior management staff.

It said this would address the gap in earnings nursing staff experienced over the last seven years, which it claimed led to nursing pay falling 14% behind the cost of living.

An RCN survey conducted last year found that 24% of nurses were considering leaving their job because of money worries. It suggested that 40,000 nursing positions across the UK were vacant.

Professor Jane Cummings, NHS England’s chief nursing officer, told the BBC: “We do lose people that need to be encouraged. We’re in the process of bringing in lots of nurse ambassadors that are going to be able to talk about what a great role it is, to be able to tell their story, so we can really encourage people to enter the profession and for those in the profession, to stay in it.”

Brexit has also had an effect on the nursing workforce, with an 89% drop in the number of nurses and midwives coming to work in the UK since the EU referendum. NHS Providers, which represents trusts, urged the Government to give reassurance to the 62,000 EU workers within the NHS.

But there are a number of measures the NHS is already taking to reduce the exodus of staff. Regulator NHS Improvement has introduced a series of masterclasses for nursing directors and HR professionals to help with retention, whilst a number of hospitals and trusts have introduced transfer systems for those who wish to change jobs.

Staff awards have also been developed to recognise achievement, and some trusts have partnered with local businesses to offer employee discounts and reward schemes.

The crisis is also being looked at by the Government. In October, health secretary Jeremy Hunt unveiled a series of measures to attract and retain new and existing nursing staff, including funding clinical placements for more than 5,000 additional nursing degrees from this year, and more apprenticeships for 5,000 “nursing associates”.

However, this received a muted response from the profession, with the Unison union suggesting that nursing apprenticeships are too costly for employers and “piecemeal handouts” were not enough to improve the situation.