Did you work in human resources in the 1980s? Or perhaps you worked in personnel? We mark the 30th anniversary of Personnel Today with a flick back through our first issue on 9 February 1988.

Speak to senior executives today and they’ll often claim that HR worries too much about having “a seat at the table”. Thirty years ago, this was still the case, as Personnel Today’s inaugural issue included a survey of HR professionals and their bosses about how they were perceived in the business.

The survey of British chief executives and their personnel departments (this was still some way before human resources became the norm) found that 91% of bosses felt the calibre of a personnel manager had an impact on the bottom line. Workload had increased for three-quarters of personnel professionals, but only 66% felt respect for the profession had grown.

Reflecting their concerns, there was a “humorous, yet practical” feature on how to win a seat on the board, penned by a fellow of the Institute of Personnel Management (the organisation that later merged with the Institute of Personnel and Development to become the CIPD). Advice included “to make the most of your appearance and, like an actor, dress the part” and to “look squarely at the chairman”.

Make the most of your appearance and, like an actor, dress the part … look squarely at the chairman” – advice from 1988 on how to get ahead in HR

Some of the other headlines gracing this first issue would not feel out of place in 2018. “Recruitment of craft apprentices is in decline” echoes some of the recent stories on a post-levy drop in apprenticeship starts, while “UK digs deep for engineers” implies there was a skills shortage in this sector before many of today’s engineering graduates were even born.

An editorial in the front of the 76-page issue talks about signs of rising tension between unions and management, and there is an exclusive interview with the then secretary-general of the TUC, Norman Willis.

Look deeper into the magazine and the generational differences become starker, however. A special report on “microcomputers“, for example, refers to a Computers In Personnel survey showing that just 33% of personnel applications ran on PCs rather than mainframe computers (up from just 4% in 1982). The report hails the growth in desktop publishing, allowing “publications to be produced on demand”.

Respectable in the 80s

The issue is a bumper one for recruitment advertising, although the salaries on offer might not prove so tempting today. British Telecom asks for a personnel officer starting on £10,500 and few management roles scale the heady heights of the late £20,000s – although many offer a company car.

If you would like to share your experiences of HR in the 80s, please email [email protected]

Furthermore, an ad seeking a “young personnel manager in their late 20s” who is “hungry for challenge” would certainly give employment lawyers food for thought in today’s recruitment advertising environment. The impressive number of brands looking for HR professionals in 1988 included Price Waterhouse (before the Coopers), Glaxo (before the SmithKline) and Peat Marwick McLintock (which later became KPMG).

Outside of the recruitment section, companies advertise everything from the Eysenck Personality Profiler to training courses in how to manage your time. There’s even a double-page advert for The Guardian.

Personnel officers and managers who weren’t too preoccupied with how they were perceived by the rest of the business needn’t have worried. Those with time on their hands could do a crossword (general knowledge, rather than HR-related) and be in with the chance of winning either a £10 record or book token.

This first issue of Personnel Today also hosted a competition sponsored by Croner, for which the winning entry would travel to the International Personnel Managers Conference in Cannes as the guest of The Management Centre Europe. Entrants had to get the correct answers to 15 questions on hot topics such as maximum amounts of compensation for a wrongful dismissal, employees’ rights to join a trade union, and the name of the chairman of Acas.

Finally, as a forerunner to Personnel Today stalwart Guru, there’s a back page filled with lighthearted stories about the world of work. Featured stories include a report on the top ventilation problems that could cause respiratory problems, and a report on salami breaks at the Italian civil service. 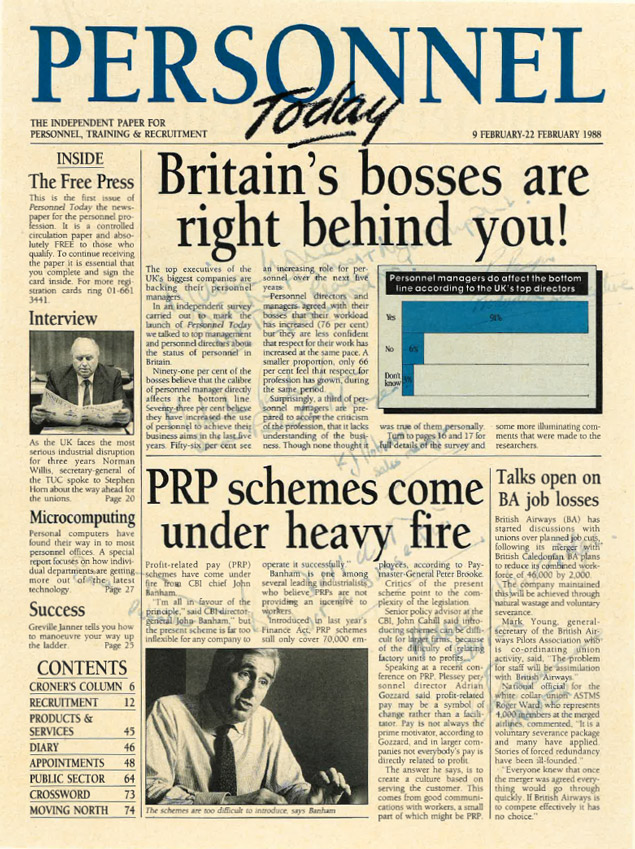 The first front cover, signed by the first editorial team 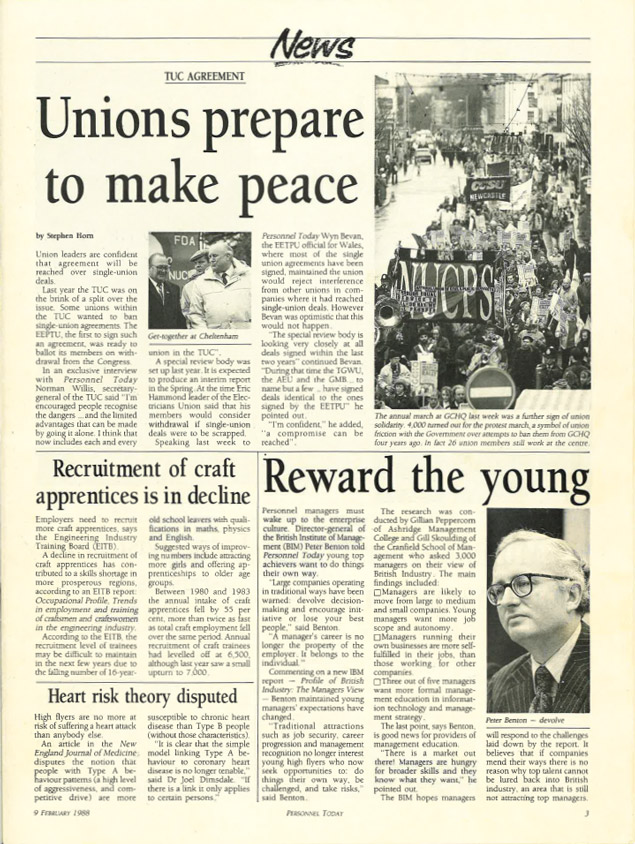 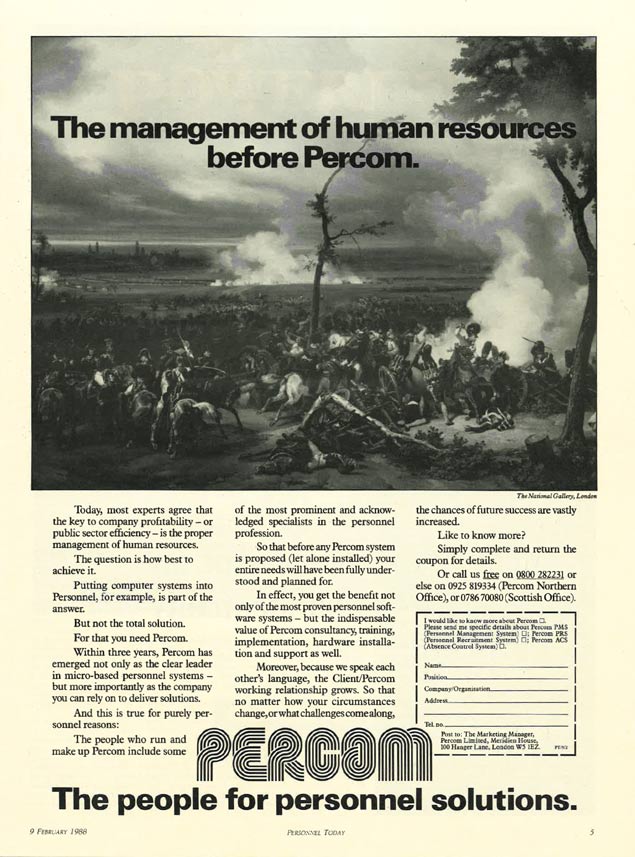 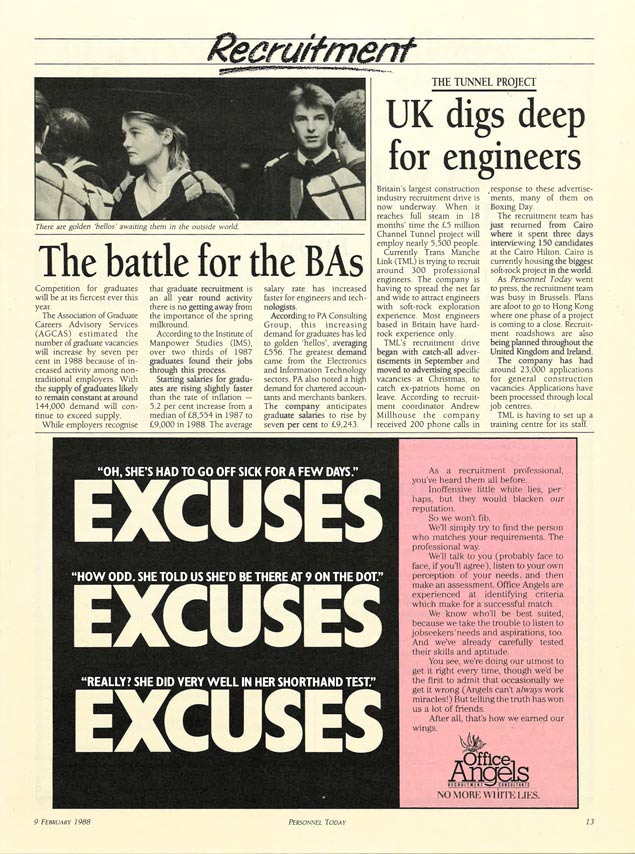 Have there ever been enough engineers? 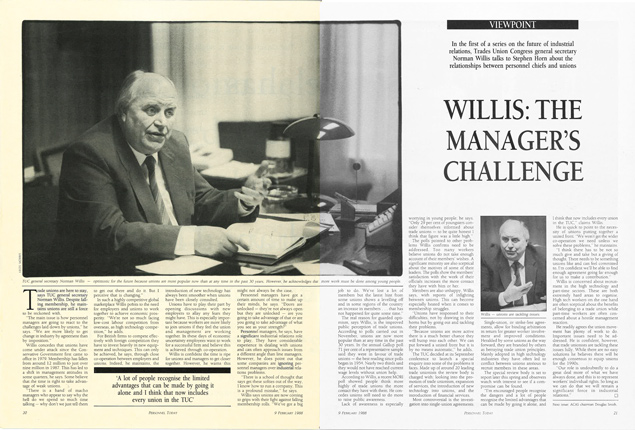 Interview with the then secretary general of the TUC, Norman Willis 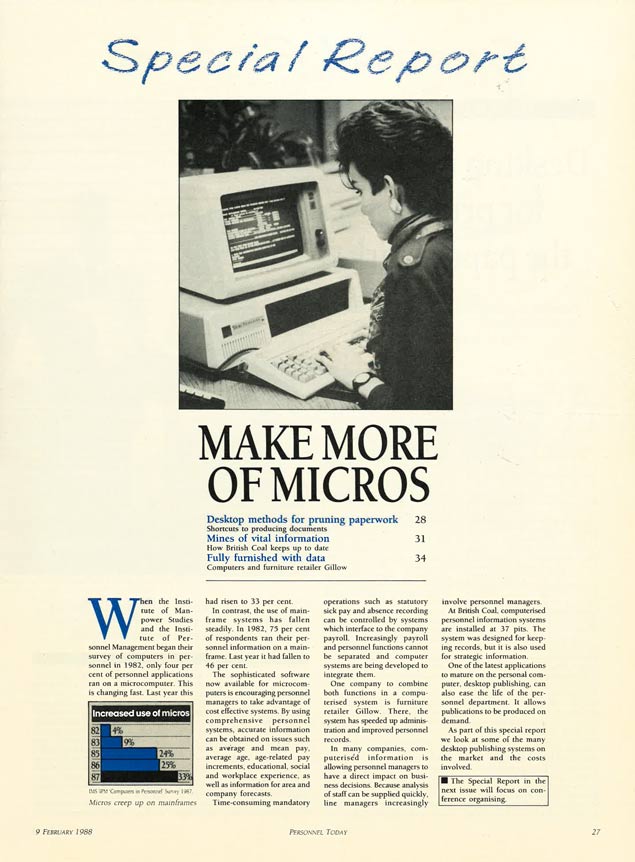 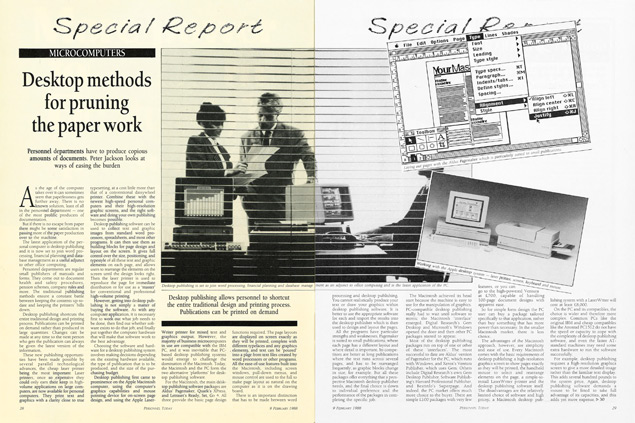 Venetian blinds, a workplace staple in the 1980s 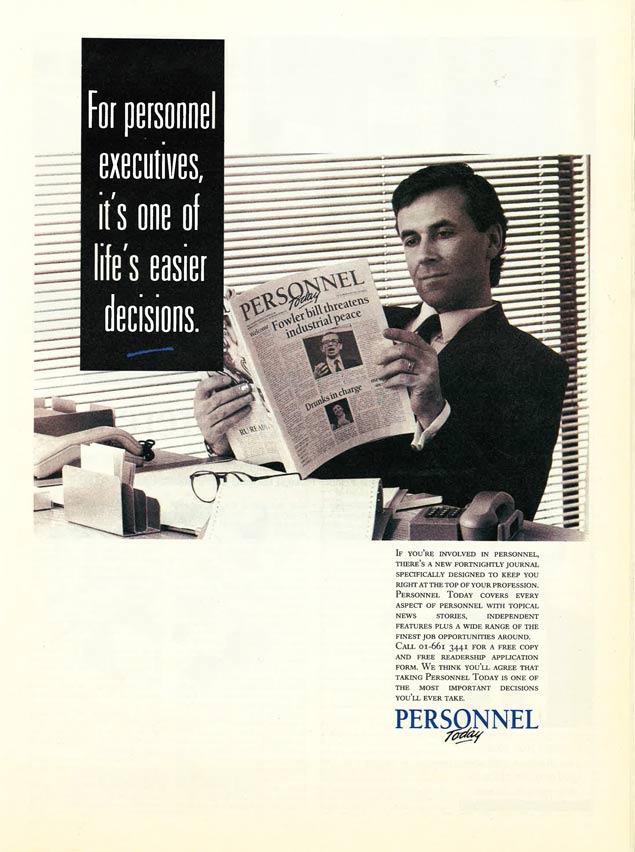 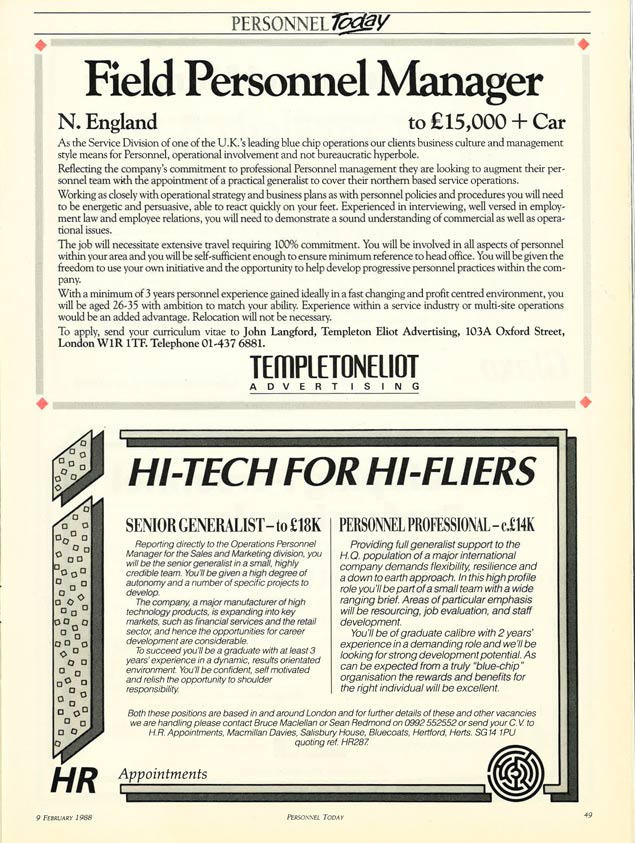 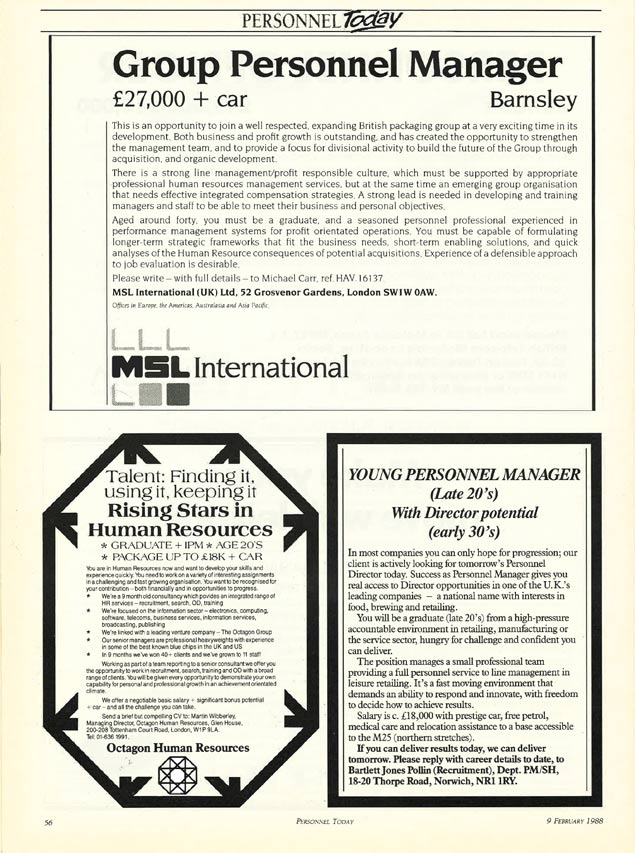 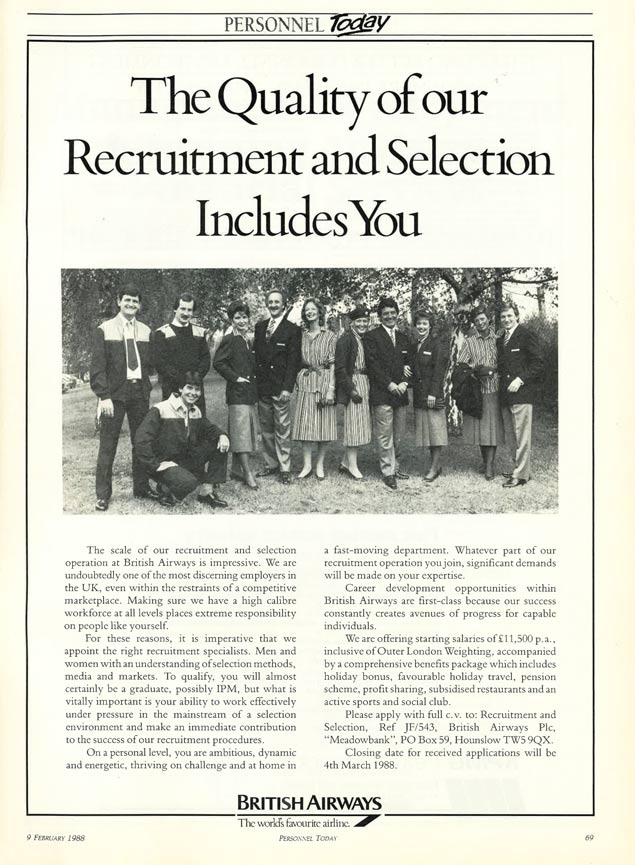 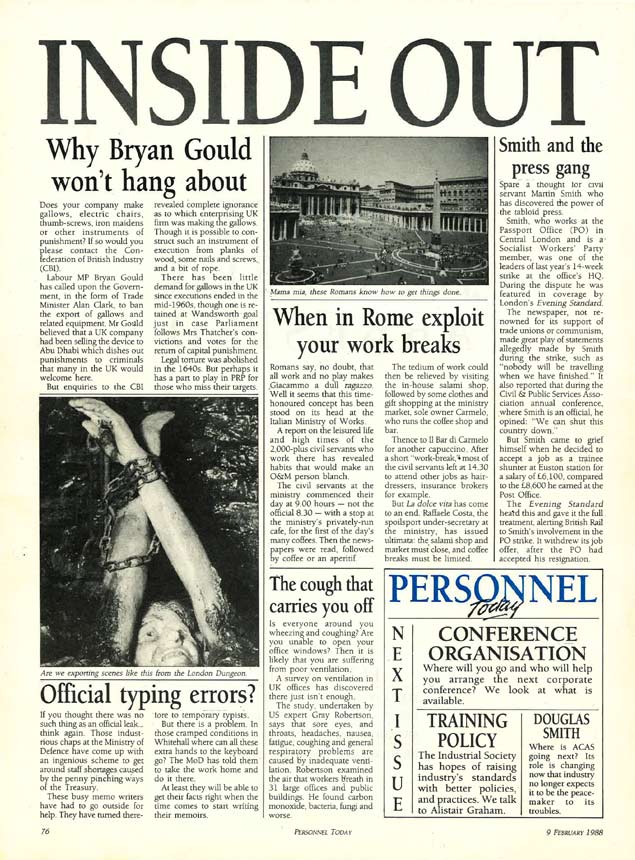 Inside Out, the funny back page, before Guru

It was a great magazine and looked forward to reading each issue. Opinions were always relevant and it hit the issues of the day.
Well done

We loved Personnel Today as we all got a free copy. I recall management training was a big initiative around that time and not long after, computerising our HR records on desk tops, not mainframe. Reward management was our key to professional credibility but all increases and salary scales done on paper with calculators. Hard to complete securely in a busy office. Since you ask, I was called Personnel Services Manager in a manufacturing multi national. We wore suits, had secretaries who screened our phone calls and female managers still had to fight their corner in a male world.

Personnel Today was a great journal and I looked forward to reading it, it was a staple diet for us! The breadth of news and insights were so important then and helped shape a lot of decisions which were made. As an NHS personnel worker the type of information covered was a god send. The an IRLR books ?

It was worth a read back then. It sometimes is today. Keep it coming!

I still miss GURU. Please bring it back!