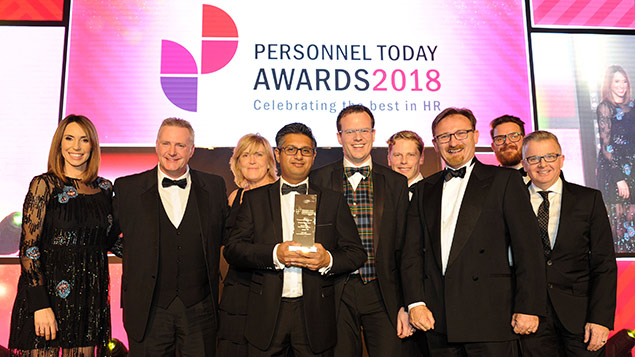 CBRE GWS Local Facilities Management is a division of CBRE Global Workplace Solutions, employing 5,400 people in the UK. In January last year, Centrica engaged CBRE to transition 450 employees across after they had been made redundant in the Carillion collapse.

The challenge for CBRE was to engage a demoralised workforce, maintain a seamless delivery to Centrica and avoid commercial risks caused by the move.

The CBRE HR team took the lead and as Carillion had entered into liquidation, TUPE did not apply. However, CBRE quickly agreed it would treat this as a TUPE environment, ensuring the entire workforce associated with the account were provided with peace of mind and financial security.

CBRE set up a mobilisation team to prepare for the influx of new staff, identify key employees and consult with every employee within the target of three working days.

On 1 February, two weeks after Carillion’s collapse, CBRE successfully mobilised the new contract and all employees received new contracts and welcome packs. Payroll was met with all employees being paid correctly. Centrica experienced no drop in service levels during the process, demonstrating the impact of flexible, nimble HR in a commercial environment.

Five years ago, the pharmaceutical company started relocating substantial numbers of staff to a new facility in Cambridge. Recognising that some employees would not want to move from its research hub in Cheshire, AstraZeneca’s challenge was to provide support to employees and retain key talent.

It launched a number of initiatives with partner Lee Hecht Harrison Penna in the areas of career transition support and employee engagement.

The former was targeted at employees choosing not to relocate: the company recognised that their skills were in-demand and needed to maintain a positive rapport with this group.

The company held workshops and “careerfests” in addition to setting up online resources and webinars to suit the needs of the staff choosing to stay in Cheshire. As the move from the north west to Cambridge would take several years, the company knew that engagement was vital, so employees were given the opportunity to begin career planning long before relocating.

The sessions and courses are open to all employees regardless of their location decisions. Since 2013 AstraZeneca has successfully relocated 38% of its north west employees to Cambridge. The engagement rate for outplacement support has been 73%. The company has minimised disruption, boosted engagement and maintained efficiency throughout the process and successfully helped staff not moving (and being made redundant) to focus on their transferable skills with workshops, coaching and one-to-one support.

The insurance giant wanted to focus on leadership development as the needs of its customers change. One of its first initiatives was a “leadership sprint” designed to bring together external thinking and case studies to examine what good leadership might look like. Designing future leadership roles brought in views from front-line employees as well as senior staff.

A “week in the life of a 2020 leader” was created, highlighting how different the role would be, and showing how a major leap was needed to acquire the skills for tomorrow’s leaders. Aviva worked with Capp to develop a success analysis through stakeholder interviews, focus groups and online surveys.

Aviva and Capp agreed on a set of seven strengths that were then transferred into assessment tools so employees can assess their leadership readiness. More than 400 leaders completed the development process. The insight has helped the company move the right leaders into the right roles, while 50 leaders who did not meet the required strengths have been moved into roles more suited to their abilities.

An office move last year led to a level of upheaval at the human capital management company. This showed in a reduced employee engagement score of 70%, a 6% drop from the previous year. The company agreed to appoint a people and culture manager to support change management and improve employee engagement.

The firm appointed Loretta Perry to the post who quickly drove through a new strategy focusing on autonomy and accountability. This was a response to employees’ wish to have greater influence on business decisions, more flexible working and growth in career opportunities.

As a result of such initiatives the engagement score has now gone up to 79% and attrition has fallen. Leadership effectiveness has increased, with index scores of 95%-100%.

The UK’s third largest funeral services business employs 600 people across 160 sites. In early 2017, it had a vacancy rate of 15% and was unable to attract new talent, partly because it was paying below the market rate.

A lack of career development for front-line staff was also an issue, along with a lack of methods to assess staff capabilities. The solution was to benchmark competitor pay and benefits then introduce a new pay structure for client-facing roles, which saw 50% of front-line employees gaining a pay rise. A bonus scheme was introduced and a career accountability framework, which established a clear path for career progression.

Personal development reviews were implemented and employees attended briefings where they could gauge how their skills and behaviour measured up against the new framework. This showed management that teams were engaged, talented and committed individuals who were prepared to go the extra mile. By the end of March the vacancy rate had fallen to 4%, and there has been an increase in experienced candidates coming to the business.

A comprehensive training plan has been implemented across the business to support personal development plans offering workshops and built around a training needs analysis. More than 100 front-line employees received a bonus in January this year for their outstanding achievements.

Faced with escalating costs, the airport was considering replacing its defined benefits (DB) pensions scheme for 1200 employees. Replacing the scheme was highly risky, with the Unite union threatening to ballot for strike action if the airport closed the scheme to the 1,200 employees affected.

The challenge then was to shift attitudes from a sense of entitlement to DB to one where people understood the financial realities and accepted the change. To achieve this, Gatwick invested in early, senior management engagement with affected employees to mitigate potential issues. The bold and unusual decision was taken to announce the pension change proposals to employees at the same time as trade union representatives. This enabled Gatwick to ensure that employees received information directly from their employer rather than relying on third-parties.

Following the consultation period, Gatwick changed its initial proposals, increasing the one-off cash payment to an unprecedented £22,000 (as much as 50% of annual salary for some staff). The consultation process built trust among employees early in the process with roadshows by leading pension advisers playing a key role. Gatwick has seen many tangible benefits from the process: the business has saved £10m a year in terms of profit per employee, there is a more even playing field for new recruits and a shift in staff culture towards pension knowledge and appreciation.

An ambitious change programme at LSBU in 2014 had created uncertainty, leading many staff to take voluntary severance. There was evidence of low morale and a lack of trust in leadership. A new strategy was put in place, working with JCA Global, to enhance leadership skills and promote openness to change and innovation.

After a diagnostic phase to understand the current culture, a three-stage intervention was launched with the senior leadership team of 26 people. The university used a leadership climate survey to understand the extent to which leadership behaviour was aligned to the changes it needed to make. LSBU explored the issues uncovered with staff through a series of conversations and forums. More collaborative working practices were set up as well as greater peer support and challenge frameworks.

Later, focus groups were set up across the university to articulate what good leadership looks like at the university and identify behavioural indicators for each attribute. It created a leadership academy offering development programmes based on leadership attributes and core skills and knowledge for leaders.

The results have seen the university move up by as much as 30 places in league tables and an award for “entrepreneurial university of the year” at the Times Higher Education Awards. Engagement has improved significantly with the statement “poor performance is dealt with effectively by the line manager” agreed with by 18% more employees than in 2016.

The parcel carrier uses employed, self-employed and agency workers among its 10,000 UK workforce. In 2017 Yodel realised that it needed to transform its cost base and address the terms and conditions of 2,300 employees at its 47 service centres in order to improve flexibility and to enable strategic growth.

Legacy contracts meant that people working side by side doing the same job were doing so on different hourly rates and conditions of employment. Previous attempts to harmonise pay and conditions had been opposed by unions. The company was also paying premium overtime rates to make deliveries at the weekend because of its over-reliance on contract and agency drivers.

Yodel’s people director led the transformation project, aiming to deliver flexible work patterns, consistent and transparent terms of employment, improve productivity, aim for Living Wage Foundation rates of pay and reduce reliance on contract drivers. It was anticipated that the changes would run into union opposition and might have to be implemented through the legal “dismissal and re-engagement process”. However, after a period of negotiations, employees eventually accepted the changes and they were implemented in September 2017.

Administratively, changes to all 2,300 contracts and payroll were implemented without error. The people team worked collaboratively with operational managers by listening to their requirements and concerns, seeking their advice, communicating clearly and supporting them with scripts and FAQs and running communication workshops.

All this was achieved while maintaining a colleague engagement score of over 60%. Yodel has delivered £9m of annual benefit and improved productivity and operational efficiency.

Book a table to the 2018 Personnel Today Awards now