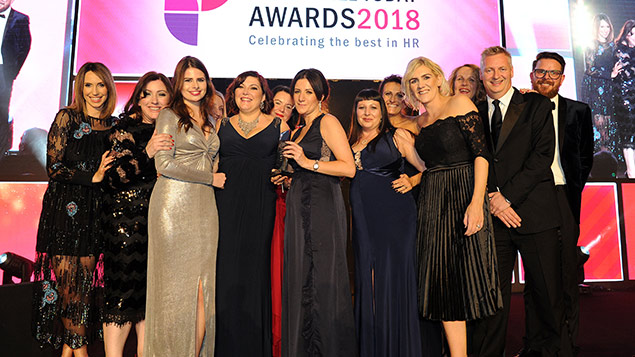 William Hill took first place in the Personnel Today Awards 2018 race for HR Team of the Year. in recognition of its work restructuring the bookmaker’s retail division. The category, sponsored by PeopleScout, was open to teams that could demonstrate they had made a significant impact on their organisation by helping it to meet business objectives, developing relationships with other functions and working closely with senior staff. We profile all our finalists…

Following the reduction in the maximum stake permitted on gaming machines and the economic challenges of the high street, William Hill was facing a lot of change.

Its HR team needed to make sure its staff were ready for its restructuring plans, which included the introduction of 359 new frontline leader roles with larger remits; the amalgamation of two existing roles and bringing around 10,000 shop staff onto the same terms and conditions.

The changes were communicated extensively and an annual event was launched for its 500 leaders to ensure they were aware of the plans. After the event, 44% said they felt “extremely positive” about the future of retail, with a further 28% feeling “very positive”.

New values and leadership behaviours were introduced. The values are visible in each office and shop and since their launch in May more than 11,500 people have nominated a colleague for recognition for demonstrating one of the values. A Retail Academy was launched to aid career development for staff and so far 450 have completed leadership training. A Talent Bank programme has also been developed for aspiring leaders and more than 70% of the 2017 cohort have been promoted.

William Hill achieved its highest participation rate ever in its employee engagement survey (89% this year compared with 56% last year) and in seven months has seen a five point increase in its net promoter score.

In 2013, BMJ was not managing its learning and development activities in a structured way; had low engagement scores in relation to how performance was managed; had lengthy recruitment processes and offered limited HR support for staff based overseas.

Recognising that its activities could be more effective, the team adopted the HR business partner model and began focusing more on L&D, reward and pensions.

New performance management and learning management systems were launched in collaboration with employees from across the business. As a result, end-of-year reviews now have a 99% completion rate.

To address concerns about career development, it introduced a management development academy and a comprehensive induction process for all new starters, involving mentoring and a buddy system.

Better recruitment practices, including the appointment of a recruitment adviser and the introduction of an electronic recruitment management system, have seen recruitment costs fall by 20% year-on-year.

To meet the needs of its multi-generational workforce, Flagship Housing Group developed a people strategy that focused on five key factors: “leadership and management in action”; “setting people up for success”; “pipelines to grow our own talent”; “an attractive employee proposition” and “an agile and progressive organisation”.

Its HR team introduced flexible benefits to allow staff to choose what was important to them, giving them the ability to buy or sell annual leave, select a car or car allowance, or purchase additional benefits.

A 14-day in-house leadership development programme was launched and has so far seen 74 take part, 11 of whom have been promoted.

Its recruitment and application process was also simplified, resulting in a 25% reduction in the end-to-end time for an application. Staff are also invited to nominate potential candidates, which has resulted in 19 new people joining the business and a £60,000 reduction in recruitment agency spend.

The number of people leaving the business within the first year has dropped by 20% – the result of an improved onboarding processes using augmented reality and artificial intelligence, and giving staff their first few weeks’ schedule before they begin their role.

From having no recruitment function a few years ago, Galliard Homes’ HR team now manages all of its recruitment activities in-house, with no reliance on agencies.

Using a preferred-supplier list, a refer-a-friend scheme, advertising on job boards and using LinkedIn as a recruitment tool, it has seen its time to hire fall to four weeks and a £500,000 saving on recruitment agency fees.

Employee engagement has also improved through better management of the company’s charitable activities and volunteering opportunities. The HR team appointed 12 corporate social responsibility champions to promote and support events, and over the past year Galliard employees have undertaken 2,000 hours of volunteer work.

The HR team has also focused on harmonising terms and conditions for its workforce. All employees now have private healthcare, an increased holiday entitlement, an annual salary and bonus review and a new DB-matched contribution pension scheme.

Learning and development has also been revamped. Prior to 2015 it only offered compliance training, but since the launch of its Learning Academy staff can choose from a variety of classroom-based or e-learning modules and workshops. Every year, 20,000 hours of training is offered, costing on average £200,000.

In early 2017, members of the HR team at travel insurance company Staysure were working in silos with different reporting lines, making it a challenge for the team to implement a consistent strategy.

The team was brought together and given the task of developing the “people aspect” of the company’s vision. Part of this was the development of a wellbeing strategy, which it hoped would improve attraction, absence rates and attrition, as well as support business growth.

The wellbeing strategy included a variety of initiatives, from free massages (which were taken up by 35% of its workforce) to classes in breathing techniques to help reduce stress among staff. Meanwhile, a quarter of its leadership team attended Acas mental health training in order to support employees.

Communication was also seen as an important part of maintaining staff wellbeing, so the HR team worked with different areas of the business to deliver news updates and a weekly blog from the managing director.

It also identified employee reward as an area to work on, so it increased base pay for contact centre staff and implemented a staged reward programme to support career progression.

Financial pressures meant that Thurrock Council’s HR team had to rethink its strategy to ensure it provided value to the organisation and helped relieve budget pressures. This meant it needed to develop smarter ways of working in order to deliver the service needed.

The HR team took a business partner approach to better align itself with what the council’s leadership needed to deliver. This entailed the HR staff having to change their mindset and focus on delivering business plans for the organisation, rather than the traditional HR support they were used to. A flatter structure was introduced to bring clarity to roles and staff were trained in areas such as coaching and mediation, in response to business needs.

A group of HR advisers were introduced to coach managers in their role in developing and managing their staff. This created capacity within HR’s workload, allowing it to offer HR support services to external organisations and generate income.

Thurrock Council said its HR team was successfully balancing its commercial ambitions with its in-house responsibilities and had achieved a solid customer base.