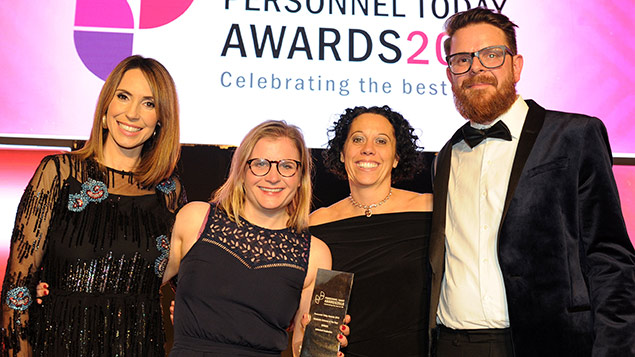 Unlocked Graduates won the Graduate Scheme of the Year Award at the Personnel Today Awards 2018 for its groundbreaking work producing leaders for the Prison Service. The judges also found that each of the shortlisted organisations here demonstrated how their graduates learn and develop through focused training and placements.

The team at Unlocked Graduates faced a challenging task in its work with the Prison Service. The service is facing a skills shortage and there is a lack of funding leading to the profession of prison officer feeling undervalued. It was clear to Unlocked Graduates that it had to broaden the range of people the job appealed to and pilot new ways to train and develop excellence. It was also tasked with developing a culture of rehabilitation and innovation in new officers.

The team’s response was to seek to attract high-achievers and change-makers to frontline roles they might not otherwise consider. It is recruiting entry-level prison officers and creating leaders who can drive an understanding of criminal justice issues in all walks of life.

The programme is not a fast track scheme. The participants join as prison officers and are paid the same with the same responsibilities as other entry-level recruits. However, they are trained to support a focus on breaking cycles of reoffending. The programme offers a fully funded Masters degree and gives recruits the opportunity to present fresh ideas to the Ministry of Justice.

So far, the scheme has recruited just over 150 pioneering prison officers from 1,500 applicants, all of whom are graduates who have passed tests in leadership, resilience and relationship building. The resulting national media coverage is changing perceptions and making the Prison Service more appealing.

To engage new talent Babcock has established a three-year strategy to establish itself as a renowned employer for top engineering, science and business students. The strategy recognises the company’s need to increase the diversity of candidates (women in particular), fill graduate roles earlier, widen the pool of universities it works with and upgrade its candidate experience.

To be successful, Babcock engaged in a complete creative reinvention of its website, print, video, social media and on-campus presence. It also, among many other initiatives, retargeted people who’d created a profile on its system but hadn’t completed their applications. This resulted in 10,000 further students being engaged.

The strategy’s success can be seen in the 9% increase in female hires. Retention is at 86% and applications have come from more than 100 universities. Much higher levels of traffic to Babcock’s graduate careers website have been achieved.

The two charities decided to work together to solve the challenge of attracting fresh talent in a highly competitive recruitment market, calling their collaboration GradUnique. This aims to: encourage graduate talent to consider starting their careers in the charity sector; create new talent streams and foster exchange of experience between the organisations; and give graduates the best possible exposure in a range of charity functions.

The focus is on developing leadership skills that are equally applicable across the commercial, public and charity sectors. The graduates make a real impact on major national projects while they’re developing their communication, team working, networking and project management skills. On completion of the two-year programme, the graduates have a real platform to launch their career path in charity leadership.

The joint development programme shared between BHF and Macmillan uses eight competencies to develop graduates’ strengths, reflecting both charities’ values. This includes: four different placements across two leading charities with rotation at the end of year one; a week-long induction where graduates engage with senior leadership from the outset; work placements in key business areas including fundraising, policy and marketing and one-to-one mentoring from a senior staff member.

Since its launch, GradUnique has seen applications increase from 530 in 2016 to 850 in 2018 (for four places). All three graduates from the 2016 cohort have been offered full-time roles within the two charities in 2018, including a managerial role in the fundraising team for one graduate at the BHF. Both charities are benefiting from a wider pool of talent, experience and knowledge.

This defence supplier saw that in the next five-10 years many of its most long-serving and skilled employees were due to retire. The solution has been to invest in its graduate scheme, which has seen it save £175k a year. Every year around 70 programme members will graduate into roles which would otherwise have to be filled with expensive, hard-to-find external hires. MBDA’s graduate scheme is designed to develop high quality engineers and business professionals and involves a week-long residential course. Graduate recruits support the next generation of potential candidates by attending university careers fairs, mentoring school pupils and acting as STEM ambassadors.

The graduate programme is tailored to ensure that anticipated skills gaps of the future are addressed and that MBDA is able to harness emerging technologies. The graduate programme has also helped the company to rebalance its ageing demographic profile and to retain the skills and knowledge that maintain its long-term contracts. The introduction of the apprenticeship levy has enabled MBDA to consider offering further qualification options to its graduate recruits such as leadership qualifications and Masters level qualifications. It will implement these changes within the next year.

On starting employment, all new graduates attend a three-day early careers induction programme to smooth the transition from education into the workplace. Some of the content focuses on building confidence, considering how the graduates present themselves, an awareness of generational differences and how to work with people with a variety of experiences and backgrounds

The demand for new graduates in the business grows every year and MBDA believes that this is the best indicator of internal customer satisfaction.

The local authority decided to create a graduate programme specific to its own needs, creating a talent pipeline that would provide the best possible experience for candidates. It decided that a two-year programme broken down into six four-month placements would give the best depth of learning for graduates.

A competency framework was developed that guides the graduate’s learning and development and also helped place individuals in the best assignments. The matching process considers the skillset of each individual, their interests and career aspirations. Each graduate is supported to study for accredited qualifications and a week-long induction allows relationships to be built, based around Covey’s 7 Habits of Highly Effective People.

A multi-staged selection process was instigated so that candidates’ skills, experience, motivations and organisational fit are fully considered, the final stage of which involves an assessment centre with group activities, panel interviews, written exercises and presentations.

The scheme’s success is seen in the 20% year-on-year applications increase to the council and its acceptance as an essential way of identifying future managers and leaders. Each recruit through the programme has so far shown they have the required skills and outlook and requests for placements from across the council outnumber graduates by three to one, showing the high regard the scheme is held in.

Real estate firm Savills found that the graduate scheme wasn’t keeping up with the changing business. Furthermore, the millennial generation demanded a more diverse/engaging programme that the firm wasn’t satisfying; in short, the scheme was losing relevance.

The response was to completely overhaul it, making it more engaging and empowering for the graduates. This involved expanding the number of pathways, opening every aspect of the business, and increasing placements in regional offices.

A major effort has been made to expand the number of universities Savills recruits from; this involves co-ordinating visits/talks/workshops to develop relationships with the talent pool and building profile in the market. First-year graduates visit schools, spreading the industry message and encouraging future generations. Retention of graduates is also key, with social and sporting events, lunch with the board, and networking opportunities just some of the methods now used.

Graduates are quickly immersed in the business and, for example, quickly gain experience of meeting clients, being involved in working groups and working abroad in work placements at various Savills offices. Feedback for all applicants is structured.

Everyone is guaranteed a job at Savills if they pass the graduate programme. However, not everyone was sure of their career path, resulting in lower than desired retention in the months following the programme. So, Savills introduced the Next Steps programme to provide graduates with an insight into how their career may take shape over the coming years.

This innovative and engaging approach to the graduate programme is having a substantial impact on its pass rate. Some 95% of graduates pass their assessment of professional competence test first time, against a national average of just 65%.

Since the scheme has been upgraded, almost 93% of managers said their graduates have had a positive impact on their working environment and 93% said that their graduates had brought tangible benefits to the business. Almost 80% of past graduates said their career had progressed since completing the programme.