Real People HR made HR Consultancy of the Year 2018 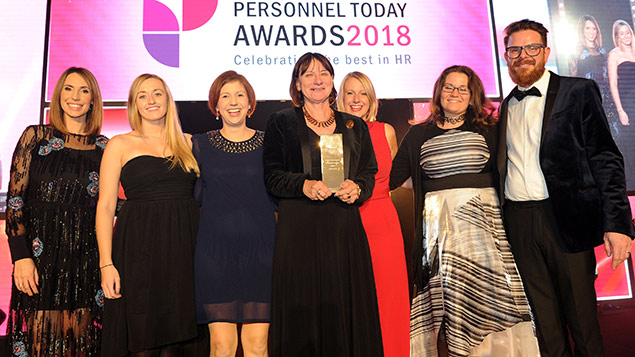 Real People HR walked away with HR Consultancy of the Year at tonight’s Personnel Today Awards 2018 in recognition of their work at Katharine House Hospice. We look at their winning entry and those of our runners-up.

Katharine House Hospice (KHH), which provides palliative care for adults across North Oxfordshire, South Northamptonshire and South Warwickshire, commissioned Real People to deliver a cultural change programme. The charity had undergone a significant change in the previous two years and there was no clear approach to HR, recruitment, performance management and retention. While clinical staff did have supervisions, these were not related to the organisation’s wider goals.

Real People put in place a consultant on site for two days a week, and provided remote support from the rest of its team. Its work included developing new employment policies and procedures, a new code of conduct that reflected the culture it wanted to nurture, and setting up a staff forum where it could seek feedback from employees. It also reviewed its staff structures and designed a restructuring process for the charity. It brought in a new HR team and revised recruitment and selection processes.

Since the changes have been implemented, 84.6% of staff say they are engaged in their employment and work for KHH, and they believe communication between staff and senior managers has improved (up 12%). Ninety-three percent agree with the statement, “I enjoy working with people at this charity”. Average sick days per employee has gone down from nine days in 2016/17 to four in 2017/18. The Care Quality Commission has commented that the hospice has a “positive culture where people felt included and consulted”.

GSK, the global healthcare company, approached Capp in 2016 as it reviewed how it selected candidates for its apprenticeships, future leaders and Esprit programmes. It wanted Capp to help it achieve more consistency in its recruitment process, so that candidates around the world were being assessed against the company’s values. GSK wanted to use personal stories to strengthen its proposition and ensure candidates had an authentic and positive experience.

Capp worked with GSK to identify four strengths and two cognitive capabilities that it required for success, and built a strengths methodology that scores candidates against these criteria. “The World of GSK” is an immersive and integrated assessment framework – the video format involves candidates in workplace dilemmas and encourages them to give a genuine response. Thanks to its success, Capp was awarded the end-to-end recruitment campaign for GSK, applying the same scoring methodology to each stage. This includes a digital job simulation and a two-hour assessment centre.

Capp’s work means GSK can now better identify individuals’ strengths and offer candidates a more authentic insight into what it’s like to work there. Ninety-three percent of apprentices said the online assessment gave them a deeper insight into working at GSK, while 88% of graduate future leader candidates would recommend the company as an employer to friends or family.

In 2017, West Oxfordshire Council, Forest of Dean District Council and Cheltenham Borough Council came together to form Publica Group to deliver shared services. The aim was to reduce cost and improve efficiency, while improve service delivery. Amid this change the Publica leadership team recognised it needed to continue to engage their existing workforce and be able to attract new talent.

Publica needed to develop a harmonised approach to pay and reward to underpin the new company’s culture and promote retention during the transition period. It also needed to get buy-in from unions and add value for employees after the closure of the defined benefit pension scheme to new entrants. Publica opted for Innecto Reward Consulting to deliver on this.

Having done extensive focus groups, an internal audit of pay and an external benchmarking exercise, Innecto came up with an extensive programme of reward reforms including implementing a new platform for flexible benefits and a financial wellbeing programme. Publica could also access Innecto’s proprietary software system PayLab to access benchmarking data. When 600-plus employees moved across to the new entity in 2017, Innecto’s work helped Publica to change the benefits narrative and build team cohesion. More than three-quarters of staff rated their motivation as above 3 on a five-point scale.

oneSource HR&OD is a shared service organisation serving Havering and Newham councils – it has a combined workforce of 7,000 excluding schools. In 2016 it reviewed its service offer and how it could deliver a more efficient, business-focused service. It decided to create a new commercial offer to provide bespoke HR and OD services for external customers, generating income on a cost recovery basis. It would also offer specialist investigation and mediation services.

oneSource now works with 10 businesses that operate externally from the council, and has generated an annual income of £60,000, with a further £40,000 generated from providing additional services such as mediation. Over the past 12 months, the organisation has delivered investigations training, sickness absence briefings, facilitated a leadership development programme, provided HR consultancy and developed a wellbeing strategy.

On a paid consultancy basis, oneSource has been able to support a number of customers to make informed business decisions while avoiding any potential conflicts. Total income generation via external business is in excess of £100,000 and the organisation has won awards and been asked to speak about developing its service.

Roots Human Resources is an HR and health and safety consultancy specialising in the not-for-profit sector. It is a social enterprise, so its profits from fee-earning services are put into offering pro bono advice services and training for smaller employers in the sector.

In 2017, the consultancy was brought in by Epic CIC – a spin-out from the Royal Borough of Kensington and Chelsea Council that provides children’s and young people’s services in the borough. In 2014, Epic had brought in a number of front-line staff under TUPE from the council but there had been a dispute over the impact to their pension scheme. The local authority then seconded a number of key employees to Epic and these seconded employees worked together with those that had been transferred.

But in May 2017, the local authority took the decision to terminate the employment of the secondees, representing around a fifth of Epic’s workforce. In order to continue offering its services, Epic had no choice but to re-engage these individuals as its own employees but lacked the HR capacity for this. Roots helped Epic to plot a timeline and communicate with the secondees, represent it as part of its legal team, draw up job descriptions and contracts and advise on reward. It also helped manage complex cases such as supporting those on maternity leave, background checks and handling under-performance.

Roots supported Epic to retain all of the “critical” employees and a third of the “desirable” secondees under the new arrangements – a further third of the desirable cohort returned in recent months. Zero grievances or tribunal claims have been lodged during this sensitive and unique period of change.