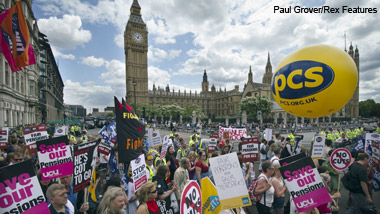 The Government could put a stop to coordinated strike action in the public sector by encouraging employers to challenge the walkouts in court.

This is the claim of Stephen Blunt, partner at law firm Clyde & Co, who was quoted by Reuters stating that the Government could stop widespread strikes by urging large public sector employers to seek court injunctions against planned industrial action by showing it to be politically motivated.

The suggestion was backed by an anonymous “Conservative lawmaker”, who told Reuters that if there was “credible legal advice from a senior solicitor”, he/she would be happy to call for it.

But is this really a route the Government is willing to take?

Blunt himself said that we are unlikely to see the Government or public sector employers go down this road in order to pre-empt the upcoming “day of action” at the end of November over reforms to public sector pensions.

He told Personnel Today: “Is it worthwhile going for it on the basis of a day? I don’t think it is. You can usually tolerate a day and make up any loss in production relatively quickly. One-day disputes don’t tend to have a great effect because they’re demonstrations rather than exercising industrial muscle.

“There probably isn’t incentive to do it on the basis of that one day but if it starts to expand, which I think are the unions’ plans, then it becomes a different ball game.”

A political dispute or a trade one?

The key to Blunt’s assertion that a public sector employer’s application for an injunction could be successful is the argument that it is largely a political dispute rather than a trade one. He said that if union leaders begin to use inflammatory language about the dispute, which the TUC has “clamped down on” so far, then it would open up the possibility of a successful argument that any planned industrial action would be politically motivated.

“In this case, I imagine the unions are being careful to stress that their dispute is over their terms and conditions of employment – particularly pensions,” Newman comments. “That certainly counts as a trade dispute, provided the dispute is with the employer. However, I don’t think a simple acknowledgement that their terms and conditions are affected by Government policy opposed by the unions would prevent the dispute from being lawful.”

Newman also pointed out that, if this argument is viable, it would not be the same as most applications for injunctions against strikes, which are “just a delaying tactic” after which the unions are able to re-ballot, correcting earlier errors.

“If an injunction is on the basis that this is not a valid trade dispute then the unions won’t have this option,” he explained. “The union would have no choice but to take the matter to a full trial and I would expect it to reach the Court of Appeal at least.”

However, if the Government did go down this route and get public sector employers to seek injunctions, it may do more harm than good.

Risk for the Government

Mike Emmott, employee relations adviser at the Chartered Institute of Personnel and Development, said that the Government would be “crazy” to test the impact of the legislation on trade disputes in this case.

“It would be seen as a political stunt by the Government to raise the profile and temperature in this way,” he commented. “The risk for the Government, or for any major public employer willing to do this, would be losing what is their biggest single asset in this dispute – a degree of public support.

“The risk for the Government if they were to lose in the courts on this issue would be that it would greatly strengthen the trade unions’ position. It would be foolish to take action in the courts against this strike.”

Indeed, unions have dismissed the idea, with the TUC calling it “sabre rattling” and the GMB union stating that it was “not too worried about legal challenges”.

But were a public sector employer to gain an injunction against industrial action by their workforce, it could cause deeper problems.

Newman explained: “Getting a strike ruled illegal does not solve the underlying problem. If employees are denied the opportunity to vent their anger and frustration in industrial action then the worry has to be that it will come out in other ways. If I were any of the employers involved, I would think very carefully before taking any legal action.”

However, Blunt argued that a public sector employer could well attempt this: “It may be that nobody has the will to stand up and put the money in to do this but I suspect there will be some characters somewhere who will be prepared to test this one out because there will be so much riding on the potential damage from the dispute.”

But while a court injunction may be an option for the Government and public sector employers if the dispute over pensions is not resolved, they could be gambling a great deal in doing this.

With public support, engagement of the workforce and the accidental strengthening of the unions’ position all at stake, they might just decide that it is not a risk worth taking.