Recruiting with flexibility: is HR missing out on key talent?

By Jo Faragher on 28 Oct 2016 in Working from home, Flexible working, Recruitment & retention 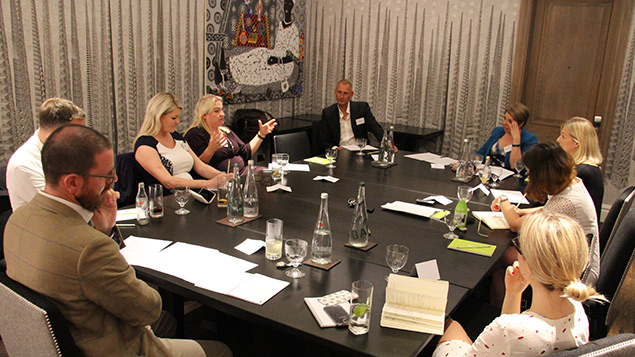 Many employers boast about how they welcome flexible working, but how many are open to discussing alternative hours or approaches at the point of hire? Senior HR professionals at a Personnel Today round table, in conjunction with Totaljobs, believe it’s time to have a more open conversation.

Whether it’s a CEO standing up at the annual conference shouting about how great a company is, or the first click on an organisation’s careers site, the message tends to be loud and clear: we’re flexible and we’re diverse.

But filter that down to HR policies and individual managers’ approaches, and that message quickly gets lost in translation. A candidate for a job is told that “we’re flexible, as long as it’s five days a week”, or an established employee finds out that it’s fine to pick their children up from school, as long as they work until midnight that evening.

Personnel Today’s recent round table on flexibility at work, in association with Totaljobs, highlighted just how complex this issue can be, and how HR is in a prime position to foster a more flexible culture and facilitate those difficult conversations.

At what stage is it helpful to discuss flexible working options, and who should bring it up? In the UK particularly, there is often a feeling of awkwardness around whether or not we can ask these questions at a job interview, for example.

Despite the fact that many job adverts emphasise that a company supports flexible working, candidates and managers alike tend to be unsure about discussing options at the recruitment stage.

“I think it’s very challenging from a new candidate’s perspective to actually broach that subject,” says Jo Mansell, HR director of Geoban UK, the operational arm of Santander. “I often wonder whether there should be the ability to have some early dialogue about that before they get into that situation. Because when you’re at that particular point, it is quite difficult to go back.”

Sharon Bridgland-Gough, HR director of Cardtronics, the largest provider of cash machines in the UK, believes we need to step back from the whole hiring process when it comes to flexibility.

She says: “For me there is a taboo. It isn’t just about flexible working, it can be about a number of points at which people need support during the recruitment process – for example getting time off to go for the interview. How flexible are we actually being?”

Often, how an organisation deals with presenting flexible options at recruitment stage will depend on how crucial it is to bring that particular person and their skills into the organisation, and this will be dealt with on a case-by-case basis.

“I think it’s way easier [to offer flexibility] the more senior you are,” suggests Simon Leeming, HR director at Virgin Money. “Most senior people would say they want to get the best person they can, and once they have identified that person, they’re almost bending over backwards because they just want to get them on board. So if that person then says ‘Can I work from home Fridays?’, they’ll say ‘Fine, as long as you’re going to come on board’”.

But, even if an organisation has a robust flexible working policy and puts out positive messages to staff and potential recruits, this can fall down if managers don’t reflect this in their actions.

Bridgland-Gough adds: “We need to look at how we’re educating and leading. Are we recruiting managers that look at individuals and think ‘is there a way to recruit this person flexibly?’ It’s shifting them from having an input focus to becoming output-focused, and making sure that underneath you have the systems and the processes to enable people to work flexibly.”

Frustratingly, this is one area where the legal framework and the resultant policies HR teams put in place can actually be a burden, rather than a support.

Currently, the law stipulates that employees can ask to work flexibly provided they have worked for their employer for 26 weeks continuously at the date of application – those with less service may get their request granted, but it’s not a statutory right.

Naturally, employer policies often reflect the legal framework, leading managers to feel they have to make an exception or work outside of the rules in order to grant flexible working at point of hire, or for someone who has been with them just a few weeks.

Leatham Green, programme director for Orbis, the HR partnership between East Sussex and Surrey County Councils, feels that policies too often get in the way of creating an inclusive and less rigid culture.

He says: “There’s a feeling that if there’s not a policy, we don’t survive. The challenge at the moment for us is, how many can we ditch? And how many do we actually need to contractually survive with a reasonable level of governance? We’ve streamlined this, but currently it’s at 93.”

“My mantra is to start from a position of engaging in conversation. That’s my aspiration, although admittedly it can be a challenge in the public sector.”

Explicitly offering flexible working patterns can also prove to be an effective attraction tool, says Jayne Hannen, head of talent, resourcing and L&D at Geoban. In one of its contact centres in Newcastle, the company had typically employed a lot of students, but was looking for a more diverse mix of people because of high turnover.

She explains: “One of the challenges was we had high attrition, so from a pure business case perspective, we needed to reduce that. We also found that students especially would move on, even for 10 pence more an hour.”

Geoban began advertising roles on websites such as Netmums to attract working parents, offering hours to fit around childcare. She adds: “We had to change our strategy quite deliberately to recruit that population, one that hopefully would have lower attrition levels in the long term.”

That said, there can be a perception – one that’s reinforced by legislation – that asking for flexible working is only for those with parental or caring responsibilities. Leeming at Virgin Money says: “Everybody’s with the idea, culturally, that you want to be with your children or part of your family growing up – but if I want Fridays off because I race old cars, they question why I might give up hard work just to have fun.

“It’s as though there are different reasons [to seek flexible working], and some are acceptable and some not so much.”

The millennial generation is also likely to prefer working outside of rigid time and location constraints, says Kathy Dyball, senior marketing manager responsible for employer engagement at totaljobs. She says: “Research conducted amongst millennials as part of our recent #MillionPoundJamie campaign found that 13% of 16- to 24-year-olds say benefits matter most to them in a career.”

Technology, especially with this generation, also influences organisations’ success in embracing a more flexible culture. “We have meetings where there are very few of us in the same room, so we leverage technology” says Bridgland-Gough. “But in an organisation that’s traditionally co-located it may seem harder to do that.”

The ability to communicate with colleagues remotely has also driven a huge reduction in the physical relocation of staff, believes Leeming. “Who moves [house] for a job these days? It doesn’t happen anymore. My office tends to be a train, a railway station, an airport lounge. Location at senior level is part of flexibility – I accept that I have to travel but we have the enablers in place to communicate.”

Ultimately, however flexibility is achieved on a practical level, one of the key issues to deal with is perceived fairness. Are employees who work differently being measured on outputs, rather than whether the work is delivered from an office or outside of traditional working hours?

Leatham Green says managers’ expectations play a huge role here. “You sometimes see it with colleagues who work part time but not flexibly being expected to deliver a full load over three or four days, which they can’t and they’re not being rewarded for it. They decide that they may as well say they’re working full time and do it flexibly.”

Being open to flexibility also requires a more agile approach to how output is rewarded through pay and other benefits.

Kathy Dyball argues that smaller companies may be stealing a march on this because they need to stand out. She says: “We find that the smaller organisations can be more agile when it comes to benefits or all kinds, not just hours.

“They compete harder because it might not be as easy for them to attract a big brand, so if they want to attract, especially entry level or millennials, they need to reflect the needs of that generation.”

Pay and perks aside, Hannen from Geoban concludes that the most important ingredient in successfully offering flexibility has to be trust.

She says: “This is about people’s mindsets around flexibility, and perceived fairness. When you’ve got people who have great flexible working patterns, it’s often about what other people in the team think about what’s going on there, particularly if they haven’t got the same pattern.

“We need to educate managers to think about the give and take in an employment relationship and how you build up trust. It’s about that even handedness across the team.”