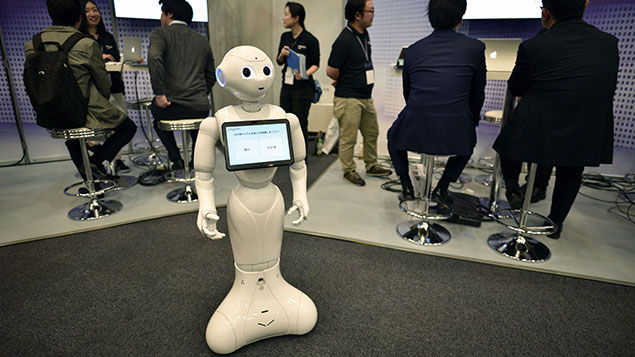 The Pepper humanoid robot is being trialled for certain non-essential social care functions at Southend-on-Sea Borough Council. Here, it is on display in Japan.
Photo: REX/Shutterstock

The rise of artificial intelligence in the workplace poses a little-discussed question – wouldn’t it be better if the HR department, not the programmers, oversaw robots? Rob Mettler suggests the idea is not as bizarre as it sounds.

Preparing for robotics and AI in the workplace

HR brings robots and people together

Is HR ready for the robot revolution?

The view that robots should report to the head of HR might sound absurd, but when the CIO of a major online retailer talks about his warehouse robots working in teams, when companies introduce “AI board members”, and robots start being trialled in social care, it’s time to reconsider lines of responsibility.

Of course, many will be of the opinion that robots and artificial intelligence (AI) aren’t human and we shouldn’t even entertain the idea.

But if we look to a future where AI agents such as IPsoft’s Amelia are fronting customer service, and robots like Aldebaran’s Pepper are undertaking manual and face-to-face tasks, we can see the essence of a changing workforce. We could argue it’s merely the next step for technology in the workplace, one following machinery in the industrial revolution, and computing in the information age.

But that argument misses a key point: the notion of intelligence. If the AI-driven customer service agent starts making decisions based on what it has learnt and experienced then who is responsible for the outcomes? Is it the Chief Information or Digital officer, or the business lines using the AI workforce? Let’s look at two scenarios to test this out.

First, let’s consider the AI board member. This challenges the perception that AI and robots will only take on blue collar work – the AI board member sits at the top table. This is not sci-fi but reality. Hong Kong-based venture capital firm Deep Knowledge was first in 2014 with Vital, and Finnish IT support firm Tieto appointed Alica T to its leadership team in 2017.

If the AI-driven customer service agent starts making decisions based on what it has learnt, then who is responsible for the outcomes?”

At first glance it might appear that these AI board members are little more than overhyped analytics dashboards bringing data and insight on demand to the board room.

But Vital has approved investment decisions and Alica T has voting rights, and in 2017 the Vital algorithm was credited with pulling Deep Knowledge back from the brink of bankruptcy, helping the company avoid investment in risky projects. Vital is treated as a member of the board with observer status, and the board have agreed not to make positive investment decisions without corroboration by Vital.

The buck stops – where?

So who takes the stick when the AI board member makes the wrong decision – is it the programmer who created it, or the CIO, or is it the business lead who commissioned it or the board for debating in front of it?

Robots in the workplace aren’t new. In 1961, General Motors introduced Unimate to the assembly line and last year global sales of industrial robots reached $13.1bn. But most of these robots are automating existing manual tasks and following processes and procedures. In this context, the robots have become the responsibility of engineering and manufacturing functions.

We are now entering a new phase of robotics where intelligence is key to their value. Pepper, a humanoid robot, is being used in a social care setting by Southend-on-Sea Borough Council, the aim being to free-up social care workers to focus on the more important components of their role. The next step on from this could be highly humanoid social care robots, as featured in Channel 4’s thought provoking sci-fi drama Humans.

In other examples, in 2017 Enfield Council started trialling an AI customer service agent, Amelia, on the frontline of services to respond to residents’ queries and application processes. So as these physical and AI robots become more intelligent and more common they will increasingly affect our working patterns, behaviour and workplace dynamics. Together with increasing levels of anthropomorphism, they are becoming more accountable – not to their technical genesis, but to outcomes they are brought in to deliver as well as the day-to-day managers and HR departments that support them.

We must resolve the issues of accountability and responsibility as these developments accelerate, and HR must be involved in the discussion. We are surely bound to witness a shift in reporting and accountability from robots’ technical guardians to an adapted HR function.

Rober Mettler is a digital expert at PA Consulting Group.
View all posts by Rob Mettler →
Previous Article
Next Article

One Response to Why robots should ‘report to’ HR