By Jo Faragher on 7 Oct 2016 in Sickness absence, Absence 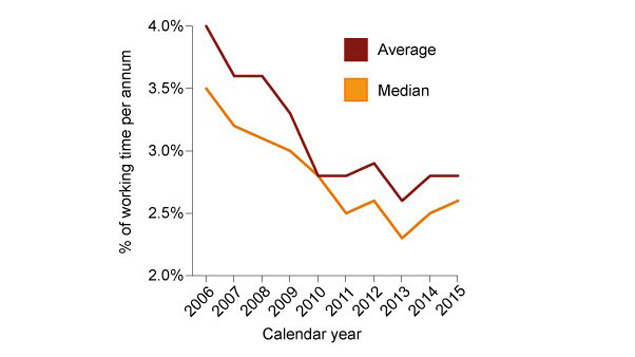 Absence rates for all employers as percentage of working time per annum, 2006-2015

This is considerably lower than 10 years ago, when XpertHR did its first sickness absence survey. At this point, the median percentage of working time lost to absence was 3.5%.

However, absence rates in the public sector continued to be higher than the private sector, with a median absence rate of 3.7% in 2015. On average, public-sector employees took 8.3 days per year off sick.

In the private sector, median absence rates were below the national median, XpertHR found. Employees in manufacturing and production took 5.7 days per year on average, while those in services employers took just five days per year.

Noelle Murphy, author of the report and senior HR practice editor at XpertHR, said this was likely to be because public-sector employers tend to be larger, so workers feel less guilty about taking a sick day as their absence has less impact on colleagues.

Higher levels of stress in customer-facing roles in the public sector was also likely to be a factor, she added.

That said, public-sector employers have seen an improvement in how they deal with absence – 10 years ago the median rate was 4.4% of working time lost, compared to 3.7% last year.

Murphy said: “We first saw a marked downturn in absence rates around the time of the recession, but this downturn has been consolidated since that time.

“There is no doubt that employers are managing sickness absence more proactively, not least because one absence rates dropped, so too did their acceptance of ad-hoc, short-term sickness absence.

“The growing interest in, and application of, HR metrics has also driven a consistent improvement in sickness absence levels. We know that one of the first steps to effectively managing high levels of sickness absence is to measure it accurately.”

XpertHR also found that just over two-fifths (40.7%) of employers measure the cost of sickness absence, although many admitted this could be an underestimate.

Those who did measure the cost of sickness absence estimated it to be an average of £455.95 per employee for the 2015 calendar year.

This sum was significantly higher for public-sector employers, where the estimated median cost of sickness absence per employee is £819.63.