Should smartphones be banned in the workplace? 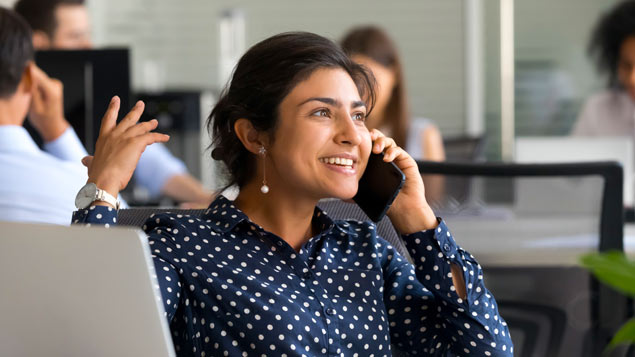 Taking personal calls at work can be distracting for other employees. Image: Shutterstock

Allowing smartphones at work can affect productivity, but is an outright ban the answer? Beverley Sunderland looks at how a carefully constructed smartphone policy can balance an employers’ desire to reduce distractions with employees’ need to feel connected with family and friends.

A report in The Times recently described confiscating smartphones as “a new front for friction” between workers and organisations. It reported that “many managers feel that they cannot trust people to resist the temptation to post updates”. As a result, some organisations are now confiscating personal phones or requiring them to be put in lockers during working hours.

How smartphones can land employers in the dock

Where an ex-employee owes money for personal calls made from a company mobile phone can the amount owing be deducted from their final salary payment?

Research by Office Team found that in 2017, staff in the US were using their mobile phones for an average of 56 minutes during the working day for non-work related tasks. This would have no doubt increased since then and usage figures in the UK would be similar.

On the other side of the equation, employees are increasingly using their smartphones for work-related reasons outside of working hours. A survey by the University of the West of England in 2018 showed that a significant number of employees answered work emails on their commute home and researchers argued that as an employer is benefitting, the commute should count towards working time.

Although social media use is often demonised by employers, the importance of access to the internet is recognised on every level. Even the government considers “digital exclusion” when measuring child poverty.

Keeping in touch with the world outside of work was the subject of an employment tribunal case that arose long before the smartphone. An office-based employee was found to have been fairly dismissed for making personal calls at work, in breach of policies that said she should not. She argued that she had a fundamental right to keep in touch with her family, especially in the case of emergency, and this argument gained a lot of sympathy from the tribunal.

Now, of course, technology has moved on and phones are not only used for calls, but also for social media, private messaging, texts and web-browsing, all of which can distract an employee. We all know the feeling of being “cut off” if we have accidentally left our mobile at home one day.

It is easy to see a future argument being made that removing a smartphone from an employee amounts to “separation” from their family. Although smartphones have been blamed for families not actually talking to one another anymore, there is no doubt that most are in touch with each other far more than they were before.

That said, banning mobiles at work is not a one-size-fits-all solution to removing this distraction. It starts with the nature of a job, with the obvious examples of driving or flying, manual labour or manufacturing, where usage needs to be restricted for health and safety reasons. However, even in these environments, the ability to access smartphones at lunch or on breaks would be a reasonable thing to do.

But for those in an office, if an employer operates an outright ban then it needs to be providing a way that employees can be contacted in an emergency and for them to contact the outside world on breaks or lunch – for instance a PC or landline – although it is likely to be argued today that a fixed landline is simply not enough to allow employees to contact family and friends as few still use them.

A more proportionate approach is to have a clear policy on smartphone usage. For example, a policy might state that phones can be retained by workers during the day (and so reducing separation anxiety), but data must be switched off so no emails can be read or social media can be used unless employees are on a break. This would allow urgent calls and the policy might state that these must be taken outside the office to reduce distractions for other workers. Phones might also be switched off in meetings.

Of course, there will always be workers who abuse this, but a clearly written policy setting out the sanctions for doing so will protect an employer if it needs to take action, much in the same way as workers taking excessive smoking breaks. If an organisation has allowed smartphones initially but a worker is abusing the rules, then they cannot argue that sanctions are unfair if they have been warned.

Employers need to recognise the positive benefits of smartphones on mental wellbeing and connectivity with the outside world, as well as the negative aspects – in particular the ability to distract. Only new case law will test the limits on this.