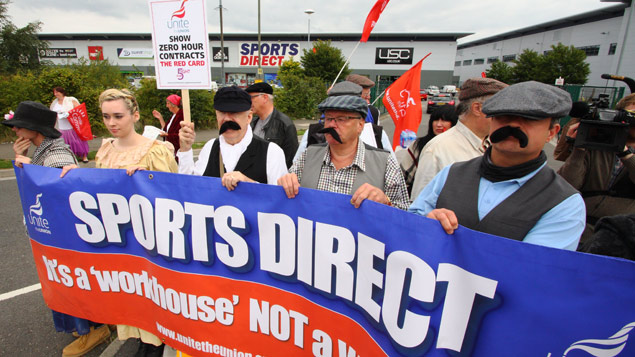 Staff at Sports Direct’s Shirebrook warehouse are to receive back pay totalling around £1 million for non-payment of the national minimum wage.

The union Unite secured the deal, which relates to non-payments going as far back as May 2012, and covers both direct employees and agency workers at the site in Derbyshire.

During a select committee inquiry in June, CEO Mike Ashley admitted that his company had broken the law by failing to pay all staff the minimum wage.

An investigation by The Guardian found that managers were holding staff back at the end of their shift to be searched by security, effectively meaning they would not receive the full minimum wage for their time at work.

Unite estimates that the back payments could be worth up to £1,000 for some workers, and those directly employed by Sports Direct and through the employment agency The Best Connection are expected to start receiving the pay in full towards the end of August.

However, as many 1,700 Transline agency workers at the site may only initially receive half the back pay they are owed because of the agency’s refusal to honour its commitments from when it took over from Blue Arrow at Shirebrook two years ago, Unite added.

Unite assistant general secretary Steve Turner said: “This is a significant victory in Unite’s ongoing campaign to secure justice and dignity at work for workers at Sports Direct and demonstrates the importance of modern trade unions in Britain today.

“But investors and customers alike should not be fooled into thinking that everything is now rosy at Sports Direct’s Shirebrook warehouse. Transline, one of the employment agencies involved, is disgracefully still trying to short-change workers by seeking to duck its responsibilities.

“Deep-seated problems still remain regarding the use of agency workers with the behaviour of both Transline and The Best Connection further jeopardising Sports Direct’s battered reputation.

“Sports Direct needs to make Transline face up to its responsibilities and seriously confront endemic abuses within its employment agencies.”

Transline and The Best Connection supply more than 3,000 agency workers to work for Sports Direct in its Shirebrook warehouse. Both agencies were warned of being in contempt of parliament and lying when the select committee published its recent report on the company’s working practices.

Turner added: “Mike Ashley and the Sports Direct board should be under no illusions. The charge of ‘Victorian’ work practices will continue to weigh heavily on Sports Direct until it moves long-standing agency workers onto direct, permanent contracts and weans itself off its reliance upon zero hours contracts.”

He said that the union would continue to engage with Sports Direct “so that we can assist it in meeting Mike Ashley’s ambition of being an exemplar employer”.