The impact of Margaret Thatcher’s Government on the workplace 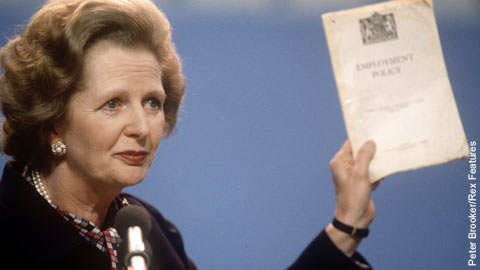 Consultant editor Darren Newman looks back at the employment law position in 1979 when Margaret Thatcher came to power, and the legacy left by her Government on the workplace.

When I first began studying employment law, Margaret Thatcher was Prime Minister and was halfway through her third term. Much of the law regulating trade unions and industrial action with which we are familiar today was already in place, but it was still hugely controversial and took up a good proportion of the course. Nowadays, collective employment law is of interest only to anoraks and activists – individual employment rights are where the real interest lies.

When I talk to HR professionals today, I am often struck by just how alien the time before Thatcher seems. In 1979, the world of work – and of employment law – was a very different place, and it is worth reflecting on just how much things have changed.

In 1979, many employers in both the public and private sector had entered into union membership agreements with a particular trade union. Known as the “closed shop”, these arrangements meant that continued membership of a particular trade union was a requirement of the job. Employees who refused to join, or who were expelled from membership, could be dismissed by their employer and such dismissals were deemed to be automatically fair. Employing someone who was not a member of the union – or not a member of the right union – was simply unthinkable.

When it came to industrial action, the law gave absolute protection to a union calling a strike in relation to any trade dispute. There was no requirement for a ballot of any sort and no need to give notice to the employer about the timing of the strike or who was being called out. Secondary action was perfectly lawful, so a union in one industry could take strike action to support a dispute in an entirely different industry. The same was true of picketing. Striking workers from one factory could turn up at the gates of a distribution depot and prevent goods from coming in or out.

In 1979, these features of the industrial relations system were entrenched and taken by many as a given. They had survived both Labour and Conservative attempts at reform. The last Conservative Government had gone all out with a major reform measure, the Industrial Relations Act 1971. This had simply not worked and had been repealed as soon as Labour came back into office in 1974.

The Government of 1979 adopted a different approach. Learning the lessons from earlier attempts, it adopted a step-by-step approach to reform. An Employment Act in 1980 was followed by another in 1982, chipping away at the laws protecting the closed shop and making unions liable for unlawful industrial action. Ballots before industrial action were introduced by the Trade Union Act 1984, and the Employment Acts of 1988, 1989 and 1990 largely completed the process.

By the time Margaret Thatcher left office, the closed shop had been abolished and it was automatically unfair to dismiss someone or refuse someone employment on the grounds of his or her union membership. Industrial action was permitted only following a ballot, although it was John Major’s Government that required ballots to be fully postal and subject to a wide range of other procedural requirements.

The reforms were bitterly opposed at the time by those in the labour movement. However, it is the test of reforms such as these that they can survive a change in Government. The success of the Conservative Government’s agenda for trade union law in the 1980s is illustrated by the fact that, when Labour came to power in 1997, it was simply inconceivable that the main pillars of those reforms would be removed. By then, the closed shop was a curious piece of history, legalising secondary action was out of the question, and the need for industrial action to be supported by a ballot was accepted by all but the most diehard trade unionists.

Whatever ideological position one adopts, it has to be conceded that, on its own terms, the Conservative Government’s reforms of collective employment law succeeded. Of course, union power was not broken by changes to the law on strikes; there was also a fundamental shift in the economy away from industries with a highly unionised workforce. Nevertheless, many in the Conservative Party look back on the changes introduced in the 1980s with nostalgia. In those days, the enemy was easy to define and, although the changes were introduced piecemeal and over an extended period, the direction of travel was always clear. In these more complicated times, legislators struggle to recapture the magic of the past. There are no more trade union dragons to slay and a war on “red tape” simply does not have the same ring to it. The step-by-step approach to employment law continues, however, so there are always employment law changes on the horizon. However, they lack the intellectual coherence and sense of moral urgency of the trade union reforms of the 1980s.

One important legacy of the changes made in the 1980s has been the shift in the focus from trade unions and industrial action to individual rights. In 1979, if you were sacked by your employer you could go to the union and, if it backed you, the workplace could be brought to an immediate standstill until you were reinstated. Nowadays, battles over the treatment of individuals are fought in the employment tribunal rather than on a picket line. Today’s employers – which may complain that their ability to manage is impaired by complicated and legalistic employment law – would be envied by their counterparts in 1979.