Theresa May: End freedom of movement the day the UK leaves the EU 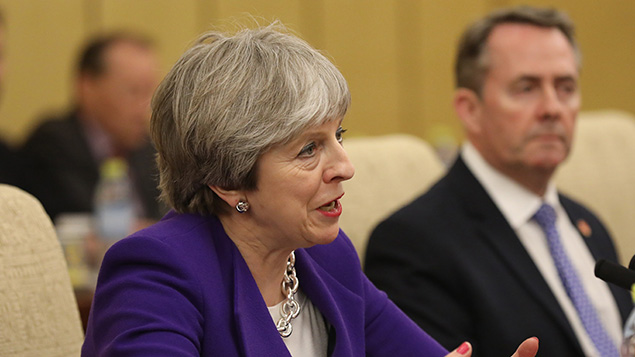 Theresa May is calling for freedom of movement for EU citizens to end on the day the UK formally leaves the EU, in March 2019.

Earlier this month, leaked draft guidelines suggested that the EU might press for revised transition terms that could extend this period to the end of 2020 or even early 2021.

But speaking in China on the first day of a three-day trade visit, the Prime Minister suggested she would fight this proposal.

May said: “We achieved sufficient progress in December and we’re now taking that next step to ensure we get the best Brexit deal for the UK and that means it will be a deal that takes back control of money, laws and borders and also able to maintain a good trading relationship with the EU for the future.”

She added: “We are not talking about something that is going to go on and on… we’re leaving the European Union. There is an adjustment period for businesses – and indeed Government – for changes that need to be made.”

However, European Parliament Brexit negotiator Guy Verhofstadt has told The Guardian that “citizens’ rights during the transition is not negotiable” and that there could not be “two sets of rights for EU citizens”.

In December, the two sides agreed to a deal whereby all EU nationals that have been in the UK for more than five years will be granted “settled” status, giving them indefinite leave to remain with the same access to public services as now.

Those who have been resident for a shorter period but who arrive before the Brexit cut-off date, currently expected to be 29 March 2019, will be eligible for settled status once they have been in the UK for five years.

May added: “When we agreed the citizens’ rights deal in December we did so on the basis that people who had come to the UK when we were a member of the EU had set up certain expectations.

“It was right that we have made an agreement that ensured they could continue their life in the way they had wanted to – now for those who come after March 2019 that will be different because they will be coming to a UK that they know will be outside the EU.

“I’m clear there is a difference between those people who came prior to us leaving and those who will come when they know the UK is no longer a member.”

Earlier this week, Government research on the impact of Brexit on the economy was leaked and published on the BuzzFeed news site, with a number of possible Brexit scenarios all suggesting the economy would be worse off. The Government has said it will allow MPs and peers confidential access to the full report after a debate in the Commons.