By Ashleigh Webber on 10 Jul 2019 in Modern slavery, Latest News 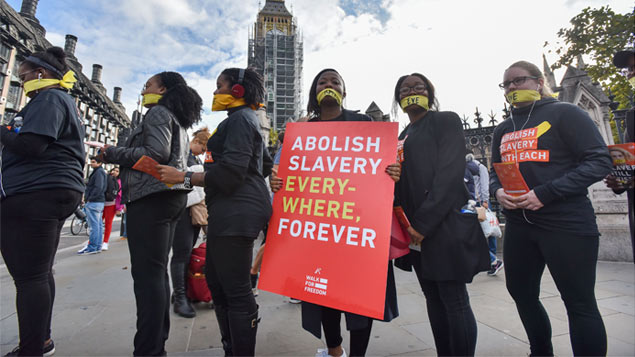 Protesters take part in the Walk for Freedom anti-slavery walk in 2017. Matthew Chattle/Shutterstock

Modern slavery reporting and enforcement will be given more teeth and extended to the public sector under new proposals.

A consultation published by the Home Office this week said that although thousands of private sector organisations have published a modern slavery statement so far, many are “failing to go beyond minimum compliance requirements”. The government wants to ensure statements can be compared from year to year, so that action can be taken to eradicate slavery in their supply chains.

Around 17,000 firms have not published modern slavery statements

The Modern Slavery Act currently suggests organisations can report on six areas, including as their human trafficking and slavery policies and the parts of their business and supply chains most at risk of slavery. However, the current legislation does not specify the areas where reporting is required.

It plans to introduce mandatory reporting areas to encourage comprehensive annual statements and enable organisations’ progress to be scrutinised and compared with other employers’ statements.

It also expects to introduce an online portal where organisations will be required to publish their statements, and bring in a single, annual deadline for reporting.

The consultation also reveals plans to bring public sector employers with a budget of £36 million or more into the scope of the reporting requirements. Central government has already committed to publishing a voluntary statement this year, while individual ministerial departments will publish their statements from 2020/21 onwards.

Home secretary Sajid Javid said: “Modern slavery is a sickening form of inhumane exploitation that has absolutely no place in society.

“Our world-leading Modern Slavery Act is tackling this hidden crime head-on and we are now taking decisive steps to strengthen it further – ensuring victims are protected and perpetrators are brought to justice.”

Prime minister Theresa May said she was proud of the progress that had already been made in eradicating modern slavery in supply chains, but efforts needed to be accelerated.

The consultation was published days after the UK’s largest modern slavery prosecution so far, which saw human traffickers sent to prison for up to 11 years for their involvement in a trafficking network in the West Midlands.

Enforcement of modern slavery reporting will also be beefed up under plans revealed in the consultation. The government wants to set up an enforcement body to impose sanctions on organisations who fail to publish a modern slavery statement, including fines.

It is also investing £10 million in the creation of a Policy and Evidence Centre for Modern Slavery and Human Rights, which will bring together academics, businesses and charities to research and share knowledge on how modern slavery can be tackled in the UK and overseas.