Would raising the minimum wage to the living wage increase unemployment? 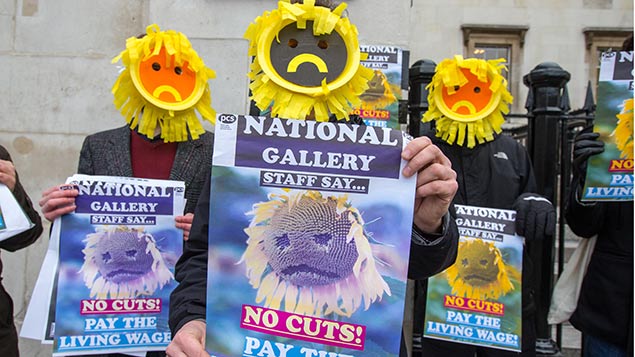 Staff protest outside the National Gallery in January 2014. REX/Mark Thomas

Some commentators fear that increasing the national minimum wage to the living wage would have a catastrophic impact on the employment rate. Hannah Price, partner at law firm Lewis Silkin, looks at the evidence.

On 1 April 2014, the national minimum wage (NMW) celebrated its 15th anniversary, just days after Vince Cable announced a 3% increase in the basic rate to £6.50 per hour. For many, this increase is simply not enough; the Living Wage Foundation fights for a UK NMW of £7.65 (£8.80 in London). However, Professor Sir George Bain, founding chair of the Low Pay Commission, while recognising that there are a range of sectors that could easily afford to pay more than the current minimum, warned that if the NMW was set at the living wage it “would cause massive unemployment in areas such as retail and social care”. Is Sir George correct? What would be the impact on employers and employees of radically increasing the NMW?

Economists (particularly in the US) have undertaken numerous studies on the impact of the NMW on employment. In February 2013, the Center for Economic and Policy Research published a study of minimum wages in the US, entitled “Why does the minimum wage have no discernible effect on employment?” As its title suggests, the paper concluded that the minimum wage has little or no discernible effect on the employment prospects of low-wage workers, and does not result in unemployment. Instead, employers respond to increases in the NMW in different ways – for example, by cutting hours, fringe benefits or the the wages of higher paid workers.

An increase in the NMW may also result in companies raising prices, or having to bear a fall in profits. However, there may be positive effects; paying a higher NMW can reduce staff turnover and encourage employees to work harder. It is worth noting that in the US, the federal NMW is significantly lower than in the UK, at just $7.25 (currently the equivalent of approximately £4.30) – higher rates are applied in certain states. US President Barack Obama is seeking to have the NMW increased to $10.10 (approximately £6.00).

This study in the US is supported by the findings of the 2013/14 CIPD Labour Market Outlook, which surveyed almost 1,000 employers in the UK on attitudes towards the NMW. In this study, employers were asked how they would respond if the NMW was increased to the living wage level of £7.65.

The majority of employers outside London responded that they would absorb the costs and seek to increase employee productivity, reduce hours, increase prices and introduce a recruitment freeze. Some 15% reported that they would be forced to make redundancies, although interestingly, in London, this was reduced to 8%.

Perhaps the reluctance to make redundancies in response to an increased NMW is because NMW employers usually work to tight margins and are unlikely to have surplus capacity in the business to enable them to make redundancies. Instead, as the study suggests, costs are more likely to be absorbed in other ways.

These trends also seem to also be mirrored across Europe. In a number of European countries, there is currently no national minimum wage – instead, minimum wages are set by national collective bargaining agreements and can vary from sector to sector. In Italy, Belgium and Germany, increases to these minimum wages do not necessarily result in increased unemployment. Instead, as in the UK and the US, employers commonly respond by raising prices, or reducing pay increases for senior employees.

The role of the employer

The CIPD’s study found that employers overwhelmingly feel that they should have a role in helping employees increase their earnings. This is a marked change since the introduction of the NMW back in 1999 (then a mere £3.60), when many (including the CBI) were concerned that an NMW would lead to substantial job losses. Instead, this has turned out to be one of the most successful government policies in the last 30 years, and has clearly had a positive impact on employer’s attitudes towards their role in ensuring their employees enjoy a certain standard of living.

Unless the Government cuts employers’ national insurance contributions for NMW employees (as Belgian employer organisations have lobbied for, and as has also been suggested in the UK), any increase in the NMW will invariably have an impact on employers. However, evidence does not necessarily support claims of resulting mass unemployment. The costs of increasing the NMW are no greater than other cost burdens placed upon companies. While a significant increase would undoubtedly be a challenge for employers (particularly employers in the hospitality, retail and care sectors), it is not an obvious trade-off between jobs and higher pay – costs can be, and indeed would be, absorbed in a number of ways.

One Response to Would raising the minimum wage to the living wage increase unemployment?