Youngest and oldest regions of UK revealed in new research 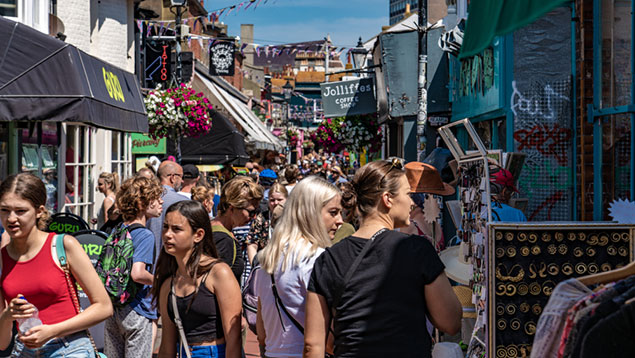 Brighton is one of the UK's youngest cities with a typical age of 35.4 years.
Photo: Shutterstock

It has long been established that the UK has an ageing population but how uniform are age demographics across the country? A new analysis takes a regional view of age and could well inform companies’ recruitment and location decisions in years to come. Adam McCulloch reports.

Work by the Resolution Foundation reveals hot spots for younger people and areas where low birth rates and a lack of migration have led to rapid ageing.

The local authority area of North Norfolk has the oldest typical age (53.8 years), while the youngest local authority is Oxford (29 years). On a geographic basis coastal and rural areas generally much older than urban ones.

Age discrimination is holding workers back

Roll forward to 2018, and those figures have increased to 33 and 39 councils respectively. And the poorest and richest parts of the UK have aged the slowest; middle income areas have aged most rapidly.

Migration was singled out as a factor that worked against ageing: the quarter of local authorities in England and Wales that have aged fastest have done so because of lower than average rates of migration.

The figures also show that even within the same region there can be stark contrasts. For example, Brighton and Hove, with a typical age of 35.4 years, neighbours Lewes, which has a typical age of 47.7 years.

Author of the report Charlie McCurdy emphasised the divergence taking place within the country. He said: “Britain is growing apart as it ages because many rural and coastal communities are welcoming fewer babies each year, while migration within the UK and from abroad has seen younger people concentrating in urban areas that are already relatively young.”

The impact of migration is identified as a key factor moderating the effect of ageing, having the “potential to offset demographic headwinds such as the baby boomer generation moving into retirement age, with smaller younger cohorts coming behind. But migration is likely to play less of a role in future, following the decision to leave the EU.”

Britain is growing apart as it ages because many rural and coastal communities are welcoming fewer babies each year, while migration within the UK and from abroad has seen younger people concentrating in urban areas that are already relatively young” – Charlie McCurdy, Resolution Foundation

With 35 local areas becoming younger than they were in 2001, the ageing trend in the UK is far from uniform. These include the likes of Barking and Dagenham, Manchester, and Nottingham. The latter two examples have experienced strong downward pressure on age because of immigration and large and growing universities, highlighting the importance of rising student numbers. Barking and Dagenham, meanwhile, has a particularly high birth rate compared with the rest of the country.

Implications for employers and policymakers

The report claims that the trends identified will have significant implications for the nation’s economic and political policies. The fact that the share of the population in pension age is now rising already forms a key part of national policy and political conversations. But, the report states: “the implications of unequal ageing across regions and local authorities haven’t been sufficiently debated to date”. One example of this is that there is little matching of local authority revenue requirements to local need.

McCurdy underlined the importance of understanding how the UK is ageing for employers: “Firms targeting pensioners’ spending power may find it increasingly difficult to source young talent in the rural and coastal communities where their services are most in demand.

“Other employers may need to work harder to create those age-diverse offices that we know can be valuable for integration, creativity and learning. More generally, businesses operating across the country will have to pay increasing attention to how location intersects with the age of their workers and their customers.”

In term of economic strategy the report links areas with higher numbers of older people with spending power. It highlights the fact that typical pensioner incomes have grown by 25% between 2003-4 and 2017-18, compared with 7% growth for non-pensioners.

Older populations represent a growing economic resource to certain parts of the country due to their spending power, the author notes. “This suggests that many local economic strategies need to think beyond the exclusive focus on securing growth in productivity as a route to income growth. Indeed, pensioners’ spending power in some ways inverts this central tenant of local economic policy makers, with incomes and consumption driving elements of GVA in some areas, rather than the other way around.”