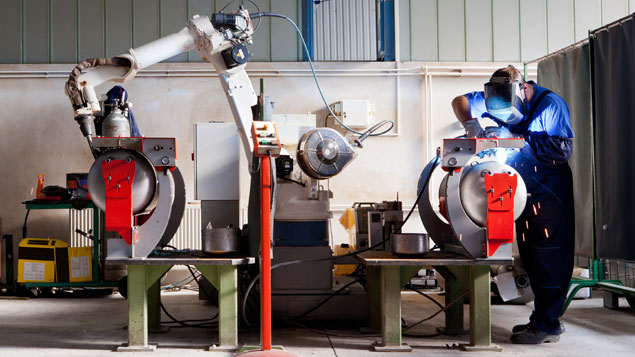 The Fourth Industrial Revolution is set to have a significant impact on pay, working conditions and productivity. Ashleigh Webber reports from the Acas Future of Work conference, where speakers explained what employers should prepare for.

The world of work is changing rapidly, not least with the rise of the gig economy, Brexit and changes to the ways and locations employees wish to work.

Emerging technology like artificial intelligence, job automation and machine learning are set to transform the workplace even further, with those in lower-paid, manual occupations at the most risk of being replaced by machines.

AI set to create more jobs than it replaces by 2037

Artificial intelligence: Could an algorithm rid us of unconscious bias?

But as speakers at last week’s Future of Work conference highlighted, the Fourth Industrial Revolution should be an opportunity to positively change working practices and the types of roles people carry out, by leveraging human skills, such as creativity, critical thinking and innovation, and letting technology take over more routine tasks.

The Institute for the Future of Work (IFW) – a body that looks at ways to make work better and fairer – has developed 10 principles that underpin what should be considered “good work” in future: access; fair pay; fair conditions; equality; dignity; autonomy; wellbeing; support; participation and learning.

Naomi Climer, co-chair at the IFW, said the increase in the use of AI, while taking into account the 10 principles above, will help improve the quality of work that people are able to produce and place more value on “distinctly human” skills.

Jobs in programming or user experience might be seen as undesirable in future, she said, as technology will be able to take over these tasks. This could potentially shift job aspirations to more empathetic roles in the social care or education sector.

“Almost 60% of millennials will be asking [employers] about technology and automation and are actively looking for it as part of their decision on whether to work somewhere because they expect their job to be less mundane,” Climer said.

Many of the jobs of the future are unheard of, suggested Equality and Human Rights Commission chair David Isaac. Around 65% of the jobs children currently in primary school will be doing do not exist yet.

“So we need to be imaginative, we need to be visionary and we need to set an example in the workplace now to make sure we actually future-proof the way in which we run our businesses,” he said.

Although unemployment in the UK is at a record low, many people still face barriers to employment – including disabled people. Technology will help them get into work, but it needs to be used in the right way.

He said apps like Microsoft’s Seeing AI – a talking camera app that assists visually impaired people – could be helpful in the workplace.

“If technology could… allow our colleagues who are disabled to operate with support in the workplace, that will be a huge advantage in terms of getting them into work and assisting them to fulfil their potential,” Isaac said.

Yet, despite the opportunities that the Fourth Industrial Revolution presents, workers still fear the impact will have on their job security and pay.

Evidence from other countries where job automation is more widespread has shown it is affecting workers’ pay and the demand for labour, according to Andy Haldane, chief economist at the Bank of England.

“In the US, for example, there’s strong evidence that the rise in industrial robots has had some significant baring on the pay in some sectors,” he said.

“The good news for the UK is the rise of robots isn’t especially extensive right now and has not had an especially significant baring on pay developments here. Our labour share has not fallen at the same time as other countries has.”

However, he warned that if robot use in the UK increased to current levels of US adoption over the next decade, pay growth could reduce by around 0.4 percentage points each year.

The time to mitigate this risk is now, suggested CBI director-general Carolyn Fairbairn. The UK’s productivity will only fall further behind if organisations do not soon make smart use of technology and reskill those who are likely to lose their jobs.

She said that productivity has collapsed since the 1980s, with the UK now at number 30 for GDP per hour worked, according to OECD data.

“The opportunity is right there on our doorstep. The transition will be massive,” Fairbairn said. “But we need to look after people and retrain and reskill all the way through.

“If we are very good at reskilling and rethinking work, this can be a competitive advantage.”

She said the CBI is working with the TUC and the chancellor on a national reskilling programme, which would help those in professions at risk of automation.

However, the increase in precarious working arrangements and limited pay growth means many employees will resist to further change.

Frances O’Grady, general secretary at the TUC, said it is time to bring in new working practices and make employees feel valued, allowing them to be more open to new arrangements.

“Surely this century we can build a new alliance for good work. Where good employers break ranks with the bad; call out companies like Amazon, whose new business model is built on old values; recognise and bargain with unions as the only genuine way to engage with workers; and defend those precious values we share – of democracy, dignity and fairness at work,” she said.

Appointing employees onto company boards – an idea floated in 2016, and later abandoned, by Theresa May – could be one way of giving businesses the perspective they need to develop good working practices, especially when considering which roles need reskilling, said O’Grady.

While automation and machine learning have not yet been widely adopted in the UK, organisations should think about retraining their staff now to ensure they remain competitive with their international counterparts.