Action on gender pay gap has accelerated across Europe 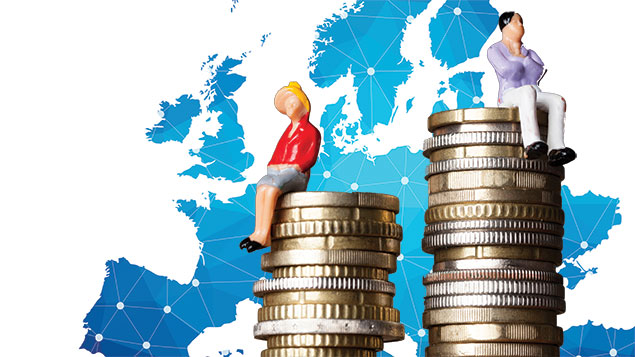 More action is taking place on pay equality in Europe compared with the US, according to a recent survey, although US firms are more proactive when it comes to sexual harassment.

Littler’s 2019 European Employer Survey, which looked at the HR and legal issues having the biggest impact on the Continent‘s employers, found that  85% of organisations were taking steps to address the gender pay gap and equal pay, up from 80% in 2018. This indicates a much higher level of concern than in the US, where according to Littler’s US Employer Survey, only 63% of respondents were taking action on pay equity.

In almost all categories of action on equal pay, Europe was ahead of the US and taking more action that last year. The best improvement came in increased training and professional development to support the advancement of female and minority employees, which last year stood at 21% and this year 33%. Only 9% of US respondents had improved in this regard.

However, researchers did identify one measure where the US improved on Europe: 48% of US respondents had increased their use of audits compared with only 29% in Europe. Researchers surmised this was because of the popularity of data-driven approaches to compliance in the US and that European firms had already carried out such audits.

The study noted that France was taking the most action on equal pay in terms of conducting audits and revising hiring practices (40% compared with 36% overall) with German firms reporting the highest rate of modifying compensation practices (39% compared with 32% overall).

Although new laws have been introduced across Europe on gender pay gap reporting, the report’s authors noted that “employers appear to be taking actions beyond those required by law, perhaps driven by a desire to protect themselves from liability, negative publicity, worker actions and other risks”.

The survey found that increasing numbers of European employers were altering hiring practices and compensation policies, in addition to facilitating the advancement of female and ethnic minority workers. But they were doing less than their US counterparts on sexual harassment partly because, as many social commentators (such as the New York Times) have reported the #MeToo movement is not as embedded in Europe as it is in the US.

Workplace mental illness is having its #MeToo moment. It’s always been there, but now it’s being acknowledged as a serious concern” – Stephan Swinkels

In the US 63% of employers had provided additional training to employees to prevent sexual harassment compared with 22% in Europe. US firms had done more to update HR handbooks on harassment policies and proactively addressed employee complaints too.

However, overall, Littler judged that progress was being made on sexual harassment in Europe, according to employment and pension law expert Merete Furesund, at Littler Mendelson, Norway. She said: “Given that strict regulatory action has not been widespread in the countries surveyed, employers appear to be taking action to address sexual harassment in order to ensure a positive workplace for employees and help protect themselves from liability. Concern and attention to this issue have led European employers to take a range of concrete actions and boost their efforts to combat it.”

The past year has also seen European employers take more action to counter unconscious bias with 28% partnering with organisations that can provide diverse candidates.

In other areas covered by the survey, nine out of 10 (87%) of respondents said their organisations were taking steps to support the mental health of employees and more than a quarter (28%) said their organisations are effective at reintegrating employees affected by mental health issues back into their workforces (6% said they weren’t). But 38% were unsure whether they were effective in this regard and 29% say they have not reintegrated employees. The report noted that part of the reason firms were more proactive in this area was that “companies are eager to avoid sacrificing productivity or losing key people because of an unhealthy environment or excessively stressful practices”.

Stephan Swinkels, coordinating partner International, Littler, said: “Workplace mental illness is having its #MeToo moment. It’s always been there, but now it’s being acknowledged as a serious concern. Given the array of forces driving the issue, we can expect continued momentum as workers feel more comfortable speaking out and companies become more involved in order to retain talent, reduce workplace stress and promote productivity.”