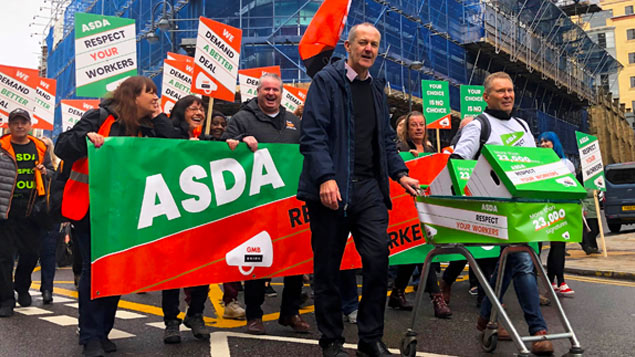 Up to 12,000 Asda staff are yet to sign a new contract that will require them to work flexible hours and lose paid breaks or face dismissal tomorrow, according to a union.

The GMB union has written to Asda’s senior vice president for people Hayley Tatum, urging the company to withdraw its threat to dismiss all staff who do not sign the contract by the end of Saturday 2 November.

Is there any way to change the terms of an employee’s contract if there is no provision for the change in the contract?

The retailer said its “contract 6” will increase base pay for more than 100,000 employees, but introduce unpaid breaks and a requirement to work on some bank holidays.

The union’s letter reads: “On November 2nd, we understand up to 12,000 of your loyal Asda workers will be given the sack – just before Christmas. That cannot be right.

“We are writing once again to ask you to postpone the contract imposition, ensure no one faces dismissal and come back to the negotiating table with talks through Acas.

“Our members have given years of their working lives to Asda, they just want a fair deal.”

The retailer said it would increase the basic rate for hourly-paid retail staff from £9 to £9.18 from April next year – a move that has been described by the union as a “smokescreen to distract from the fact they plan to sack workers this weekend”.

Gary Carter, GMB national officer, said: “It is unprecedented to announce an April pay rise in October – and Asda are clearly feeling the heat of opposition to the imposition of this contract.

“We do not yet know what inflation will be by that point, and so this could end up failing to keep pace with the cost of living.”

An Asda spokesperson said the “overwhelming majority” of retail staff have signed the contract.

The spokesperson said: “We have been absolutely clear throughout this process that we don’t want any of our colleagues to leave us and have worked extensively with them and union representatives to understand and address any concerns.

“Despite extensive engagement throughout this process it is disappointing that there has been some misinformation from external parties to our colleagues. We do not want anyone to leave due to misinformation, particularly in these challenging economic times, so once the notice period ends on Saturday, we will write to those colleagues who are still undecided – currently in the hundreds but continuing to drop – offering them the opportunity to sign up because we don’t want any colleague to make a decision to leave and then regret it.”

In a letter to staff, Asda CEO Roger Burnley said almost 120,000 colleagues will be on the new contract from Sunday, which meant there were “less than 1,000 colleagues who are still undecided”.

“Whether those claims are successful will depend on a number of factors including whether Asda has followed a fair consultation procedure, the business reasons for the change and what notice of dismissal has been given,” she said.

“In a difficult and highly competitive retail environment where Asda is seeking to benchmark terms with competitors it is probable its business reasons for change will stand up to scrutiny.

“Whether the procedure followed prior to any changes and dismissals will be considered fair depends on the scope of consultation carried out with the GMB and staff.”

One Response to ‘Up to 12,000’ Asda staff face dismissal this weekend