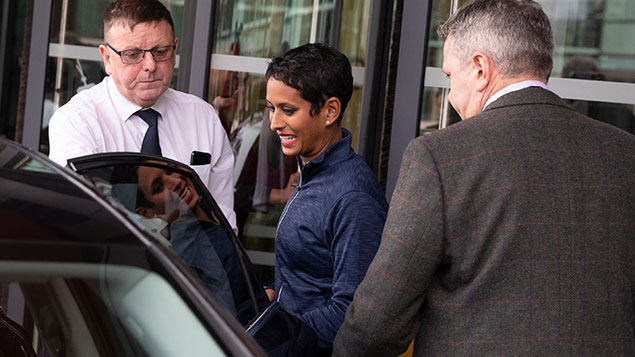 Naga Munchetty leaves MediaCityUK in Salford on Thursday 3 October 2019 after presenting BBC Breakfast for the first time since a complaint against her on-air comments about Donald Trump was briefly upheld before being quashed.
Photo: Peter Byrne/PA Wire/PA Images

BBC staff have called on management to formally apologise to presenter Naga Munchetty after the decision to uphold a complaint against her was overturned.

At open meetings held for employees by the corporation on Thursday heard employees call for the Executive Complaints Unit, which had upheld the complaint, to be made more diverse with the addition of black and ethnic minority members.

There were also calls for an overview of the role of editorial standards chief David Jordan, who last week had decided that Munchetty had breached editorial guidelines by discussing tweets by Donald Trump in the context of racism live on-air in July.

Jordan’s decision, triggered by a complaint from a viewer, was reversed by BBC director general Lord Tony Hall on Monday in response to internal and external pressure. Munchetty’s co-host, Dan Walker, who also took part in the on-air discussion had been mentioned in the complaint but not censured.

Lord Hall said in an email to staff that “Munchetty’s words were insufficient to merit a partial uphold of the complaint against her”, adding “it was only ever in a limited way that there was found to be a breach of our guidelines”.

He wrote: “These are often finely balanced and difficult judgments. There was never any sanction against Naga and I hope this step makes that absolutely clear. She is an exceptional journalist and presenter and I am proud that she works for the BBC.”

Allegations of racist attitudes were aired at the open meetings with many staff relaying their own experiences of discrimination, including from editorial director Kamal Ahmed who, according to The Guardian, said he was “astonished” by some of the racism he had encountered at the BBC, adding “I’ve never been more aware of my colour than in this place.”

However, the meetings heard that it was not easy to separate the need for impartiality from the need to recognise and report on racism. Head of news Fran Unsworth suggested that although the BBC had handled the complaint badly there were still a range of opinions within the broadcaster’s upper echelons regarding the complaint’s validity.

Munchetty returned to work on the BBC’s Breakfast show yesterday and has made no comment on the controversy.