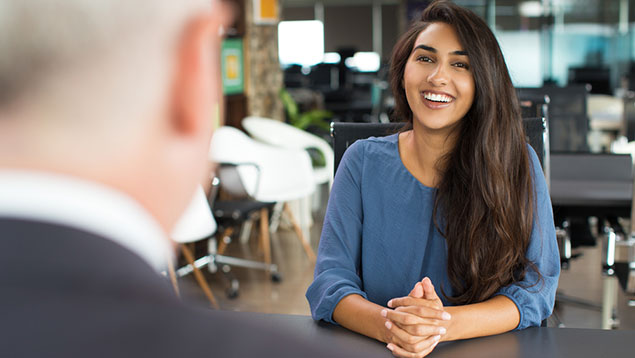 Young people said they had to pretend in job interviews and felt unable to relate to middle-upper class projections of firms.
Photo: Shutterstock

Two-thirds of young people feel they have to conceal or change who they really are in order to make a good impression and find a job at many businesses. And most don’t think businesses do enough to attract those from diverse socio-economic and ethnic backgrounds.

These are among the findings of a survey and report by graduate recruitment service Debut, published today (16 May). After surveying and interviewing young people in the UK (18-25 year olds), researchers found over a third (35%) of participants were being put off joining a business if they perceived the workforce to be made up predominantly of middle and upper-class employees. Debut claimed that this equated to 2.5 million young people.

Those who felt they had to change who they were to make a good impression at interviews said they felt they weren’t able to express themselves as individuals during the application process. “We need more opportunities to show who we are, and our potential,” said a 21-year-old female participant, filling in an application form or submitting your CV is not enough.

Social mobility organisation Sutton Trust contributed to the report, whose CEO, James Turner, said the struggles of less-advantaged young people were because: “The UK is a particularly class-based society, which hasn’t changed significantly over time.”

The report’s authors also claimed to have identified a demand for personalisation among young people looking for a career. It cited interviewees who said recruitment was “impersonal and factory-like” and that recruiters didn’t seem to care about the mental health impact of the interview process on the candidates. Another said feedback – even if it was something like “your values do not meet ours” – would provide support to candidates and help them in their next application.

Most respondents (61%) didn’t think businesses were doing enough to hire people from diverse (defined here as: gender, sexuality, ethnicity, disability, socio-economic) backgrounds; additionally, salary transparency – or rather the lack of – was a concern for many with 67% saying they would be put off applying for a job that wasn’t immediately transparent about wages. One respondent, a 21-year-old female, told researchers she wouldn’t bother applying on the basis of “competitive salary listings unless they’re a really well known firm”.

It is very worrying to learn that so many young people are put off joining a firm because they think the workforce is too middle-class” – Dame Martina Milburn, chair, Social Mobility Commission

Also contributing to the report were HR personnel from leading companies such as EY, Cisco and HSBC, whose emerging talent recruitment manager, Charlotte Leer, told researchers: “The scale of this issue is vast and all businesses should be taking steps to address this. For example, we’ve taken the bold decision to focus on a strengths-behaviours-values based approach. This enables all candidates to present themselves as they are, rather than how we would like them to be, while also removing the filters and biases arising from a CV-driven approach.”

Debut CEO James Bennett warned that to prevent the continuation of damage to the wider economy, companies must end policies that promoted “professional exclusion”. He added: “It is imperative that businesses must do more than just pay lip service to diversity and inclusion and start taking real action to ensure they are in-step with modern social trends and viewpoints.

“Today’s graduates don’t just demand equality – they expect it. And as graduates become increasingly more aware – and more vocal – about such issues, the talent pool will dry up for companies that aren’t putting enough of an emphasis on this.”

Last month, the Social Mobility Commission’s State of the Nation report found that social inequality would fail to improve unless the government took urgent action, and claimed the situation had remained “virtually stagnant” since 2014.

Commenting on the Debut report, Dame Martina Milburn, chair of the Social Mobility Commission: “It is very worrying to learn that so many young people are put off joining a firm because they think the workforce is too middle-class.

“Our recent State of the Nation report also revealed that graduates from disadvantaged backgrounds earn 11.5% less than their peers five years after leaving university. Employers need to do more to attract and train less advantaged recruits and pay them a reasonable wage.”

Debut’s report is entitled Working with Class: The state of Social Immobility in Graduate Recruitment.