Carillion tried to ‘wriggle out’ of pension obligations 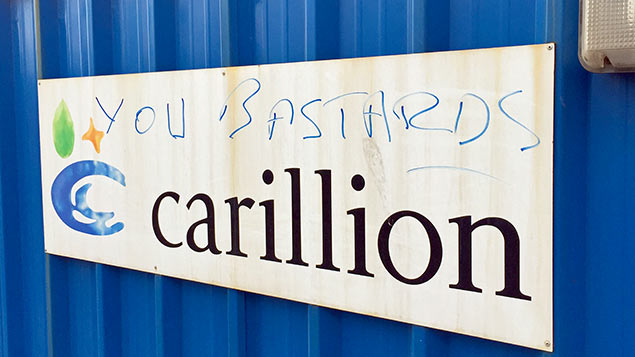 Failed outsourcing giant Carillion had been trying to wriggle out of obligations to its pensions schemes for a decade, according to a group of MPs.

Frank Field, chair of the Work and Pensions Committee, said: “It’s clear that Carillion has been trying to wriggle out of its obligations to its pensioners for the last 10 years.

“The purported cash flow problems did of course not prevent them shelling out dividends and handsome pay packets for those at the top. This culminated in negotiating deficit contributions away entirely last autumn to enable more borrowing. Remarkably, this was endorsed by the trustees and the Pensions Regulator.”

A letter to the committee from Robin Ellison, chair of trustees of Carillion’s defined benefit pension schemes, said that the pension scheme had been stressing its intention to “de-risk” since 2008.

He also said trustees had failed to come to an agreement over valuations in 2008 and 2011 because the trustees were “seeking to take a more prudent approach to funding than the company considered it could afford”.

Employment law: insolvency of an employer

The Pensions Regulator was informed and became involved in discussions, but did not exercise its powers.

Field added that the Pensions Regulator has questions to answer. “They have been sniffing around Carillion – at the trustees’ behest – since at least 2008, though it is not apparent to what effect. When 10 years later, the company collapses with £29m in the bank and £2bn in pension liabilities, it doesn’t look good for them.”

Carillion cited cash flow problems as a reason for not making higher contributions in 2011 and 2013, despite it paying more than £70m in dividends to shareholders in both years.

A spokesperson for the Pensions Regulator said: “The current regulatory framework attempts to balance the needs of a scheme and its members with the needs of an employer to invest in their ongoing business.”

It added that the information available about Carillion before last summer “did not highlight sufficient concern” to warrant the watchdog stepping in.

Tom McPhail, head of policy at investment firm Hargreaves Lansdown, said: “It is easy to criticise the actions of the trustees and the regulator with the benefit of hindsight.

“In spite of last year’s profits warning, it was far from certain to outside observers the company was about to go bust.

“The trustees took a decision to try and save the company, rather than refusing to cooperate in its attempts to finance its cash flow.”

The Financial Reporting Council (FRC) has today announced that it will open an investigation into KPMG’s audit of the financial statements of Carillion for 2014 to 2017 and will consider whether the auditor has breached any relevant requirements, in particular the ethical and technical standards for auditors.