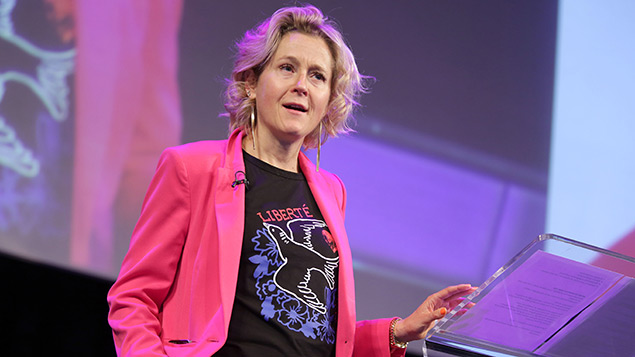 Enjoying working with people is no longer a good enough reason to be in HR, according to Peter Cheese, CEO of the Chartered Institute of Personnel and Development. Martin Couzins reports from the CIPD’s 70th annual conference.

CIPD 70th Annual Conference and Exhibition: Who said what?

“There is a better gender balance in the House of Lords than in the technology sector,” Baroness Martha Lane Fox

“Some of the most important tasks carried out by workers are intangible – such as mentoring,” Alex Edmans, professor of finance, London Business School

One in three workers in the UK receive training. We are terrible at investing in the UK,” Kate Bell, head of the Economic and Social Affairs Department, TUC

“This is the most exciting time to be an HR professional,” Mathew Davis, HR director, Addison Lee

“People don’t feel constrained when they feel they can work in a way that suits them,” Gillian Daines, innovation director, Foster Communications

“I realised I needed to humanise my practice. When we see others as resources to get jobs done it is easy to inadvertently do damage along the way,” Siobhán Sheridan, director of civilian HR, Ministry of Defence

“There is a bit of a legacy in HR,” announced Peter Cheese in his opening conference speech. “People will say, well I came into HR because I like people, I’m not terribly good with numbers and don’t really understand technology. We have to embrace this stuff and teach ourselves more about technology. As an Institute we’re trying to develop a lot more ways in which we can help people understand digital.”

The event provided some insights into the issues HR professionals will need to grapple with in the future. Cheese insisted that digital literacy was a key issue and it was essential that HR had good digital skills. Technology was transforming the way businesses work and transforming the way HR worked.

Baroness Martha Lane Fox, co-founder of lastminute.com and chancellor of The Open University, agreed that HR had to focus on getting up to speed with digital. Recounting her time at lastminute.com, she said the only way she could stay on top of changes in the business was to keep educating herself about technology. “We must all challenge ourselves to understand technology. Think about how you can become more skilled and don’t be frightened of it,” she said.

She said that while developing skills for the future, HR professionals also needed to be thinking about what made good work. This was because the nature of work is changing. We face new challenges such as the rise of automation, as well as familiar challenges such as harassment in the workplace. Added to this, productivity in the UK remains stubbornly low.

Cheese said this was why we needed a new approach to work. “We’re trying to really nail down the essence of good work. This is about jobs and roles that give people opportunity. That means giving people a voice and ensuring they are using their skills properly, they are properly managed, they can see how to develop through those roles and they have a degree of autonomy around what they do.”

In a session on what constitutes good work, Stefan Baskerville, principal director for unions and business at the New Economics Foundation, told delegates that employees’ lack of bargaining power on wages had played a part in delivering more than 10 years of wage stagnation. Low paid work was a big issue, he said, with five and a half million people in the UK earning less than the living wage. These people were in work but did not earn enough to live on.

Baskerville was cautious about the role technology could play in managing the workforce: “Algorithmic management is an issue HR needs to think about. It has taken the human out of resource management,” he said.

HR, he said, must focus on good work that pays enough for employees to live on, gives security and provides autonomy and control in their work. Employees wanted to be listened to, have a voice at work, be fulfilled and see progression in their role.

Many organisations have failed to invest in their people in the past but Mathew Davis, HR director at taxi company Addison Lee, said HR professionals were in a position to change that. “Focusing on the quality of work, rather than the quantity of work, marks a great step forward for the HR profession.”

HR needs to think about what good work looks like from an HR perspective. How does HR make sure it behaves ethically and helps organisations behave ethically?

The CIPD highlighted the work it has done in recent years in the wake of ethical scandals such as BHS and Sports Direct. A major piece of research conducted by the CIPD in late 2015 found that 34% of HR practitioners reported compromising their principles to meet business needs.

Professor Roger Steare, corporate philosopher in residence at Cass Business School, agreed that there was plenty of room for improvement here. He shared insights from his forthcoming research into the moral DNA of HR professionals.

He said it showed that outside of work, HR professionals were caring and thoughtful but once in work, they conformed when under pressure and were compliance-driven. HR professionals made decisions based on compliance rather than their principles. There was no excuse for that, Steare said, adding: “We cannot absolve ourselves as moral humans by saying someone told us to do something.”

The nature of the work did not help either, said the CIPD’s Cheese. “We want to behave in human ways but we come to work and are compliance-driven.”

Siobhán Sheridan, director of civilian HR at the Ministry of Defence, said that HR could be guilty of behaving according to and complying with organisational norms in order to maximise individuals’ career prospects. “I had to work in a certain way to get a seat at the table,” she said. “It is easy to be led by that early in your career. We need to discuss ethics and morals earlier on in HR careers.”

So how can HR professionals act more ethically? Steare said the most effective interventions were at local team level. “Create safe spaces where you can argue and be honest and speak truth to power.”

He said the good news was that shifting to good work and treating employees better did pay off.

He revealed how he had spent four years analysing data collected on the best 100 companies to work for in the US and found that companies with higher levels of employee wellbeing outperformed their peers by 2.3%-3.8% a year over the period 1984-2011. That’s a cumulative improvement of between 89% and 184%.

He said that however you viewed the future world of work, there was one factor the HR profession could rally around: the need to invest in employees so that over time organisations could see improved performance.

“While this new world certainly has its challenges, there are also many opportunities for organisations to shape how competitive they are for the future of work,” said Cheese.