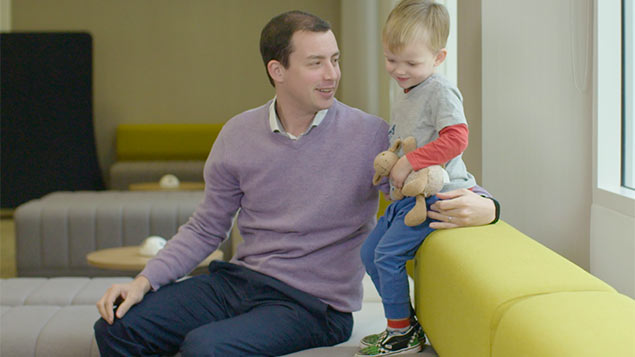 James Ashall of Diageo: "It can so significantly impact your choice if your employer is actively supporting people into parental leave.”
Photo: Diageo

Parents employed by Diageo in the UK will be eligible for the same paid 26 weeks’ leave, retaining benefits and bonuses, regardless of gender, sexual orientation or whether they become parents biologically, through adoption or via surrogacy.

Mairéad Nayager, chief HR officer, said: “True gender equality in the working world requires fundamental changes to a broad range of working practices, including a shake-up of the policies and cultural norms around parental leave.

“Today’s announcement is about matching ambition with action and supporting all of our colleagues – regardless of gender – to experience the joy of raising a young family, while continuing to thrive at work.”

Earlier this week O2 announced it was increasing paternity leave to 14 weeks and last year Aviva reported that two thirds of male parents at the insurance firm took six months off, following its introduction a policy which enhanced shared parental pay to the same level as maternity pay.

Research by University College London last year found only 8% of expecting parents planned to use their shared parental leave entitlement, suggesting that without enhancing parental pay, fathers were discouraged from taking long periods of leave.

Top employers are coming under increasing pressure to publicise their parental leave and pay policies. Last month the Executive Coaching Consultancy revealed that only 18 employers in the Times Top 100 Graduate Employers would comply with Jo Swinson’s proposed Parental Leave and Pay Arrangements Bill, which was tabled in June 2018.

Diageo’s parental leave policy is open to all 4,500 employees across the UK, including the 3,100 staff in Scotland, who are primarily in manufacturing roles.

Minister for women and equalities Penny Mordaunt said: “I’m delighted to see Diageo making this move. Shared parental leave gives both mums and dads the chance to spend quality time with their child in the important first months of their life, creating a bond that will last a lifetime.

“Employers can reap the benefits too. We know that flexibility in work is proven to create happier, more loyal and more productive workforces.

“Action like this is exactly what we are encouraging as part of our forthcoming strategy which will aim to empower every woman in the UK to achieve their true potential.”

The new policy also strengthens the support for parents as they return to work including the option of keeping in touch days, parental coaching, flexible working policies and access to free independent counselling.