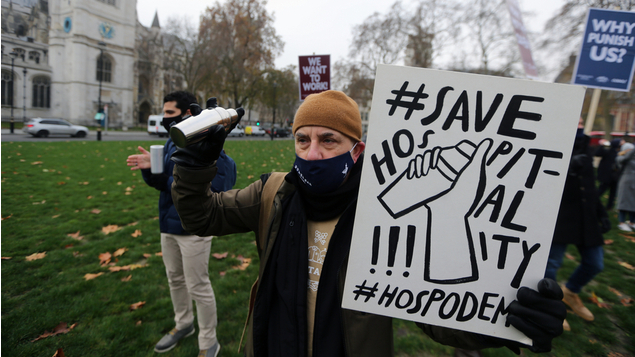 There were 819,000 fewer workers on company payrolls last month than at the start of the pandemic, with the hospitality sector accounting for a third of the decrease, according to the latest Office for National Statistics data.

The number of payrolled employees in November fell by 2.7%, or 781,000, compared with the same month last year, early estimates showed. There were 28,000 fewer people in payrolled employment compared to the previous month.

London saw the greatest number of jobs disappear from payrolls compared to the previous year, with the number of payrolled employees in the region falling 5.0%.

Of the 819,000 decrease in employees on pay as you earn (PAYE) real time information (RTI) submissions in November, some 214,000 were living in London and 113,000 in the south east – both regions with a high level of employment in hospitality and retail.

All sectors saw a decrease in the number of employees on payrolls, but the accommodation and food services sector was hit the hardest; some 297,000 of jobs lost were in this sector, 160,000 were in retail and wholesale and 115,000 were in manufacturing.

Redundancies reached a record high of 370,000 in the three months to October, the ONS’s labour market overview showed.

However, the quarterly decrease in the employment rate was partly offset by an increase in full-time employees, up by 135,000 on the quarter to a record high of 21.24 million.

Gerwyn Davies, CIPD senior labour market adviser, said: “Even the most optimistic forecasters would not have expected the economy to have generated a record high number of full-time employees at this stage of the economic cycle. This is due to growth in public sector employment and the series of targeted government measures that have helped preserve jobs against the backdrop of a flexible labour market.

“At the same time, pain is still being inflicted on significant parts of the workforce, especially young male jobseekers and the self-employed. And the worry is that the record increase in redundancies will add fuel to the rising jobless count in the coming months”

Davies reiterated the CIPD’s call to extend the Coronavirus Job Retention Scheme to the end of June to suppress unemployment – especially in sectors that have been severely affected by pandemic restrictions.

“In addition, the government should significantly raise public skills investment to help upskill or retrain staff in sectors hardest hit by the pandemic and for those who have been made redundant during this period,” he said.

Laura Stewart-Smith, head of workplace savings and retirement at Aviva said that some workers may have “slipped through the net” as employers prepared for the furlough scheme to be pulled in October.

“The extension of the furlough scheme to March 2021 has provided some much needed respite for some firms. However, many workers may have slipped through the net as employers prepared for the scheme to be wound down in November.

“The reopening of the economy in parts of the UK and positive vaccine news has strengthened confidence levels among businesses. However, vaccinating most of the UK is a massive task and any real positive impact on the economy will unlikely be seen until later in 2021.”

The extension of the furlough scheme to March 2021 has provided some much needed respite for some firms. However, many workers may have slipped through the net as employers prepared for the scheme to be wound down in November” – Laura Stewart-Smith, Aviva

“Mass redundancies can be hugely stressful for everyone, including HR. And certainly, if the role of HR is also going to be caught up in the exercise, then anxiety can be extra heightened, and it can be hard to think objectively. If this is the case, HR professionals will need to make sure that they obtain the support they need to, such as outplacement or career coaching support or an external debrief with an independent consultant,” she said.

“Making good staff redundant that everyone would prefer to keep is always going to be hard, but it needn’t be the end of the relationship. HR may wish to create an alumni group for the organisation (even a simple Facebook group) to stay in touch with those that have left and who may be brand ambassadors, or indeed work for the firm again. Keep contacts close as you never know what could happen next.”

‘Double whammy’ for retail and hospitality

A separate report from the Commission on Workers and Technology, which is chaired by Yvette Cooper, said low paid workers, especially in retail and hospitality, were facing a “double whammy” of employment difficulties.

Its Sharing the future report says: “Past recessions have accelerated automation, replacing human tasks with technology, and there is already evidence that this is happening again during the Covid-19 recession. Sectors including hospitality and retail face a ‘double whammy’ because they are being hit by Covid-19 restrictions now and also have the most job tasks that can be automated.”

It warns that the future of work could go in two directions after the Covid-19 crisis.

“In one possible future, jobs get worse as technology gets better. Millions of people face greater insecurity, harder work, more surveillance, and worse pay and conditions. They are shut out of decisions without rights or representation and are denied the training to adapt to new jobs and prepare for the future,” it says.

“But there is a second, more optimistic future too. Technology change can be a huge force for good. We need it to solve Covid-19, support our ageing population, make our economies more productive, fund and improve our public services, and deal with the crisis of climate change. We can use technological innovation to make our country fairer, stronger, cleaner and greener.” 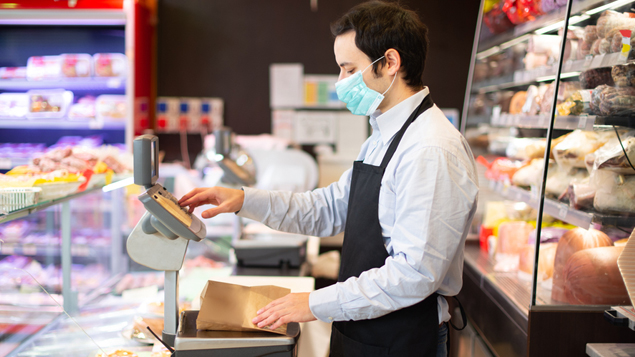 Recruiters have seen candidate supply rise at its fastest rate in more than a decade, but there has been a...