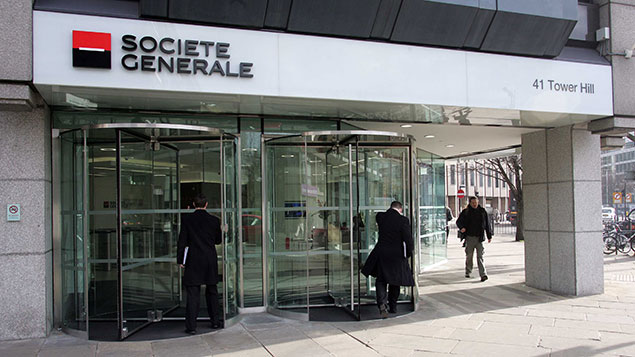 Investment bank Société Générale is the latest large City employer to contemplate a shift of employees to the Continent.

With a 4,000-strong London workforce and its headquarters in Paris, the French finance giant has warned staff that an unspecified number may have to leave the UK. Those who remain could be redeployed or may lose their jobs under its plans for Brexit. The affected roles are thought to be related to the bank’s financial markets business.

Brexit and the banks

A spokesman for Société Générale told The Times: “We are actively engaged with a small number of staff initially impacted to help them make informed decisions about moving to the EU. For those staff wishing to move, we are fully committed to supporting them.

“If their role ceases to exist in London due to Brexit and they do not wish to relocate to the EU then we will make every effort to support them through redeployment opportunities within the group.”

The bank’s London staff will soon be moving into a new office tower in Canary Wharf, a move that it claimed signalled its determination to maintain a high level presence in the UK.  The spokesman said: “The bank remains fully committed to the UK reflected through its new building … and will continue to provide high-quality financial services to its UK, [the European Economic Area] and international clients from London, Paris and its international branches across Europe and worldwide.”

Société Générale has operated in London for nearly 150 years and has previously stated that about 300 new jobs would be created in Paris and elsewhere in the EU through relocations and the creation of new roles.

The loss of passporting rights – the means by which firms are authorised to undertake financial activities throughout the EU – remains the investment banking sector’s main concern over Brexit. The Société Générale spokesman said: “In the event of a loss of passporting within the Brexit framework some roles within the financial services industry that are currently performed out of the UK will no longer be able to be performed from here for regulatory reasons.”

There are also opportunities for EU countries to benefit from the relocation of skilled workers and France’s President Macron has held meetings with leading executives from Wall Street to discuss with them the benefits of moving operations to Paris.

Dublin, Amsterdam and Frankfurt are other key destinations for employees of the major banks moving operations out of London. However, it has been reported that the European Central Bank is wary of the possibility that City institutions may still supply their services from London after setting empty shells on the Continent. To prevent this, the ECB has encouraged capital, risk management and governance structures to be set up across the EU to create the infrastructure for investment banking activities.

Deutsche Bank is among the key institutions already moving assets out of London, making Frankfurt rather than London the primary booking hub for its investment banking clients.

Job trends in London’s financial quarter overall have been positive over the past few years according to figures from the Greater London Authority and the Office for National Statistics, with 483,000 people working in the City and it remains unclear how Brexit will affect numbers. Recruitment consultancy Morgan McKinley has reported booming sub-sectors, with employment driven by changes in financial reporting standards such as IFRS 9 and IFRS 15, as well as a rush of hires in stakeholder relationship management and forecasting as institutions shift operations elsewhere in the EU.

Hakan Enver, managing director, Morgan McKinley Financial Services, said: “That businesses are opting to keep people in the City for now is excellent news. But they are poised to pivot if they need to, so we may yet see a mass relocation in the coming six months”. He also noted that while August was a relatively strong month for the City jobs wise, September had not given grounds for optimism with a 38% fall in job opportunities year on year.

He stated on the company’s website: “What’s disappointing is that it [September] wasn’t the beginning of the seasonal spike, it was the end of it.”