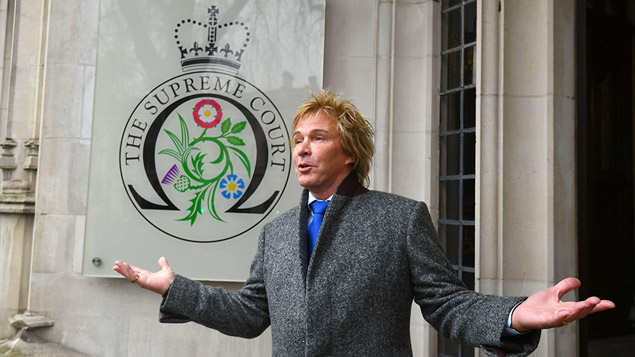 The Supreme Court hears a key gig economy case today as Pimlico Plumbers challenges last year’s Court of Appeal decision that a plumber who signed an agreement with the company describing him as self-employed was in fact a worker.

A year ago, in Pimlico Plumbers Ltd and another v Smith, the Court of Appeal ruled that the plumber was a worker under statutory provisions entitling him to rights as a worker.

Gary Smith was required under the agreement to wear a Pimlico Plumbers uniform, use a van leased from the company, displaying its logo and equipped with a GPS tracker. He also had to work a minimum number of hours per week.

I’ve always been a self-employed entrepreneur and I’ve always seen the engineers in the same way, and I feel that Gary Smith is trying to have his cake and eat it.  Mr Smith’s approach to this case has felt he’s been trying to hold me to ransom and I don’t take kindly to that” – Charlie Mullins

However, he could choose when he worked, which jobs he would attend, but had to provide his own tools and equipment, and handle his own tax and insurance.

Mr Smith brought an employment tribunal claim that was dependent on him being classified as a “worker”.

When Mr Smith’s case reached the Court of Appeal, it accepted that he was a worker, entitling him to some basic employment rights such as the right to be paid the national minimum wage and holiday pay.

The Court of Appeal was swayed in particular by the claimant’s requirement to provide his services personally. His agreement with Pimlico Plumbers did not allow him to substitute someone else to do the work.

Charlie Mullins, chief executive of Pimlico Plumbers, said: “The outcome of the case will have huge ramifications for a large part of the economy, including the media, the health service, and of course the construction industry…

“In one three-year period Mr Smith earned more than £500,000 as a self-employed contractor, but when his circumstances changed he wanted me to foot the bill for sick and holiday pay, as well as to grant him other employment rights, which he was not entitled to, and which in my view he had already been paid to take care of for himself.”

Mullins claimed the case is not like Uber and other gig economy cases. “The engineers who contract to Pimlico Plumbers are very highly-skilled individuals, can go anywhere and do whatever they want…

“Pimlico Plumbers wants to comply with its obligations and it has always been our genuine belief that we have been doing that. HMRC has looked into the situation in the past and told us that engineers are self-employed. We have been operating in accordance with that.

“I’ve always been a self-employed entrepreneur and I’ve always seen the engineers in the same way, and I feel that Gary Smith is trying to have his cake and eat it. Mr Smith’s approach to this case has felt he’s been trying to hold me to ransom and I don’t take kindly to that.”

Harry Abrams, solicitor at law firm Seddons, said: “As with the recent Uber case, if the Supreme Court dismisses the appeal from Pimlico we will likely see a sea change in the ever growing gig economy.

“Companies will have to restructure their models to minimise the risk of worker status being triggered and carry out a review of their contractual wording – albeit with the knowledge that tribunals will look beyond what is written down.

“Following the King v Sash Window case [ECJ], a Supreme Court confirmation of worker status here may lead to a situation where such companies have to pay unpaid holiday back pay going back indefinitely.”

On the wider issue of the need to evolve employment law, Mullins added: “Employment law is very unclear, and hopefully we can all get some clarity from the Supreme Court on this situation, which I have already said will have huge implications for many industries, including plumbing and construction.

“And it doesn’t stop here either; the UK is going through a huge cultural change in how people work, and how they are paid, and what we need more than anything else here is a ruling that takes into account what is happening on the building sites, offices, press rooms and hospital wards of the 21st century, not one that harks back to the 1950s.”

The Supreme Court judgment will have important implications for gig economy employers. It will be the highest case authority in the UK on the employment status of gig workers.

The hearing is due to last two days with a judgment expected in early March.