Hitting the target with gamification 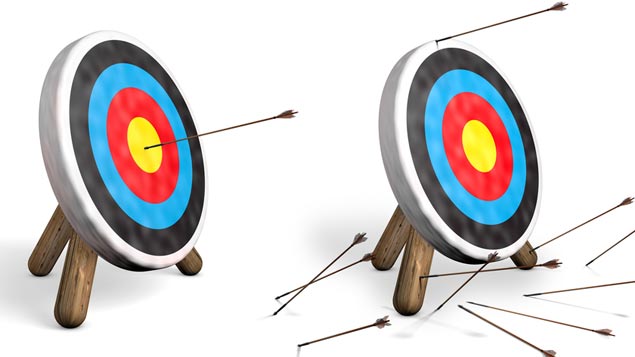 Focusing purely on games might not hit the target.

Consumer brands have been using games for years to attract customers, and gamification has also been gaining ground in the corporate world. But, Cath Everett asks, beyond the games themselves, how can organisations ensure that they deliver some value to the workforce?

Gamification has attracted impressive levels of hype in recent years, despite the term having been around since 2002, when it was first coined by British-born programmer and inventor Nick Pelling.

The concept initially made itself most felt in the marketing departments of business-to-consumer companies, where it gained popularity in social media campaigns and customer loyalty programmes.

It has since started trickling down into the HR world, particularly in the area of recruitment.

But, as it moves into the corporate sphcaere, could the concept prove sustainable or just yet another industry flash-in-the-pan?

According to Gareth Jones, partner and head of technology at talent management consultancy The Chemistry Group, it has suffered from “a bit of ambiguity and faddishness”.

The original notion behind gamification involved embedding game software into other systems so that employees could gain points, badges or rewards for everyday achievements.

Software systems could either encourage individuals to complete desired tasks or increase competition between team members in order to boost overall performance.

Today though, says Jones, too many organisations simply “close it down and think about games” in a bid to liven up their employer brand and to attract graduates to their recruitment sites.

“The value in gamification is not in creating games, but in taking game mechanics and blending them into workplace processes to create stickiness.” – Gareth Jones, The Chemistry Group

“The value in gamification is not in creating games, but in taking game mechanics and blending them into workplace processes to create stickiness,” he advises.

“I believe game mechanics are really relevant in increasing engagement and have a future, but games are just a flash-in-the-pan and do the whole area a disservice.”

A big problem in adopting such game techniques though, according to a report entitled Big Game Hunters: Why HR Directors are Missing the Target from HR services provider Penna is that a lot of organisations are waiting for early adopters to prove their value before going for it themselves.

Start of the journey

Another big barrier to uptake appears to be corporate culture.

More than one-third of the 100 HR directors interviewed for the report felt that gamification was just not for them, at least partially because they were unsure where best to employ it, who was likely to engage with it and whether or not it would deliver a return on investment.

A further issue was the perceived high capital cost of implementing it (27%).

But Gary Browning, Penna’s chief executive, challenges this: “Gamification doesn’t have to involve a large investment, as we know that gaming elements are present in our everyday lives that we can apply to the workplace.

“Once set up, it can continue to run with minimal impact on time – helping to onboard new starters for example.”

And Browning is definitely a believer in the whole concept, acknowledging that there is “still a long way to go before it is recognised as an established tool that can be used by human resource professionals, alongside the suite of others they know and love”.

In fact, market analysts Gartner estimate that point will come in between five and 10 years’ time.

On the other hand, Browning feels that “we are on the verge of a game changer if gamification is applied to the workplace effectively” as it has “very real potential” that has yet to be realised.

One organisation that is just starting out on its journey to try to do just that is the Children and Family Court Advisory and Support Service (Cafcass).

It introduced a gamified employee scorecard system called ‘”myWork” in April 2013 to enable its 1,200 social workers to see how they were performing against their peers locally and nationally in order to boost both engagement and efficiency.

The system, accessed via Cafcass’ intranet, provides each individual staff member with metrics on things like wellbeing – so how many sick or training days they have had – as well as insights into how productive they are.

Productivity is worked out on a cost-per-case basis, which takes into account each individual’s annual salary and how many cases they manage to close.

Cafcass, which represents the interests of children in court if their parents are separating or they need to be taken into care, decided to introduce myWork after finding that the number of cases it was handling since the Baby P scandal in 2007 had leapt by 70%.

“We are on the verge of a game changer if gamification is applied to the workplace effectively.” – Gary Browning, Penna

Over the same period, the organisation had also undergone a budget cut of about 15%, which had resulted in it more than halving the size of its management team from 350 to 160.

This meant that the amount of time managers could devote to each employee inevitably had to fall, and led to a drop in the mandatory number of hour-long face-to-face supervisions per year from nine to four, excluding annual appraisals.

Across Cafcass, the move has freed up roughly 250 weeks of management time per annum.

“MyWork is about allowing the workforce to be more self-regulating and self-sufficient,” Daryl Maitland, the organisation’s senior HR manager, explains.

“It sets individual metrics against the local team’s and national averages so it brings gamification elements in by enabling people to compare themselves to the norm.”

Holding up a mirror

By providing staff with a “mirror to hold up so they can see how they are doing”, it quickly becomes clear if they’re performing below par “without their manager having to say anything or ask them how they could do things differently”, he adds.

The new system was developed in house, and pulls data from the HR and social workers’ case management systems into a single environment with secure individual access. Cafcass worked with IT services provider Fujitsu to ensure it integrated smoothly with its existing IT infrastructure.

It has delivered a number of clear benefits. Not only has the burden on managers been reduced and the quality of work improved, but the number of grievance cases has plummeted from 200 three years ago to 30, due to people’s expectations being managed more effectively.

Another unintended benefit has been an increase in the accuracy of the information stored in the case management system database.

Although there is a statutory requirement to ensure that such data is clean, because this affects users’ productivity ratings, it is a huge personal incentive to keep it up to date and relevant.

But the next step in Cafcass’ gamification journey will be to talk to the unions and the working group set up to provide input into the project about whether or not employee recognition schemes such as “social worker of the month” should be added.

Other plans up for discussion include a gamification-based health and wellbeing initiative similar to the Global Corporate Challenge to encourage staff to exercise, and a system to help young children articulate their feelings and emotions.

Maitland says that, while gamification is nothing new, emerging technology is making it easier to introduce as a workplace concept.

He adds: “I’m a fan of behavioural economics and of Dan Ariely, who says that even a small amount of recognition hugely increases happiness and people’s willingness to put in discretionary effort.

“Technology now becoming available just makes it all much easier to do in new and exciting ways, which is great.”