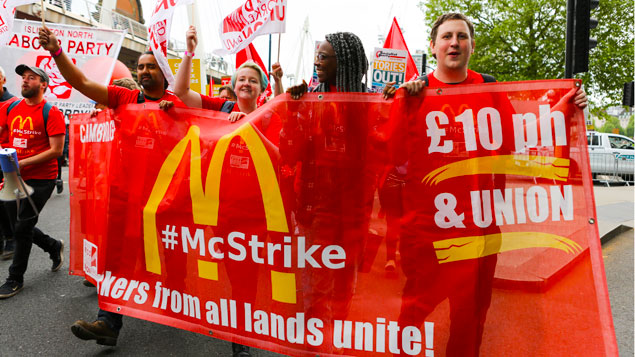 Workers at McDonald’s, TGI Fridays, JD Wetherspoon, Deliveroo and Uber Eats are staging a 24-hour walk out today, in separate disputes over pay and union recognition.

Staff at several McDonald’s branches in London and Cambridge; JD Wetherspoon pubs in Brighton and TGI Fridays restaurants in Milton Keynes, Covent Garden and Stratford City, are seeking a pay deal of £10 an hour.

A demonstration is taking place in London’s Leicester Square today, organised by the Bakers, Food and Allied Workers Union, Unite and anti-poverty charity War on Want. Similar demonstrations are also being held in several other UK cities and internationally.

It is the eighth strike by staff at the TGI Fridays branches, according to Unite. They are mainly striking over a change in the company’s tips policy, which the union said leaves waiting staff £250 a month worse off. Earlier this week the government announced plans to ban employers from taking or making excessive deductions from workers’ tips.

“These workers have had enough of low pay and insecure work. They will not stand by and let their bosses pocket their tips nor cheat them out of money they’re rightfully owed,” said Unite national officer Rhys McCarthy.

“They are demanding not only respect but better pay and union rights, because they know that by standing together they can win.

“These young workers are leading a growing movement against low pay and insecure work in the hospitality sector and across the gig economy. Unite stands right by their side.”

Uber Eats and Deliveroo couriers are also taking part in the strike. Uber Eats drivers, as part of the IWW Couriers Network, will not log on to the app to accept jobs in protest over falling drop rates. They are seeking a minimum £5 per drop and £1 per mile.

An Uber Eats spokesperson said: “Uber Eats provides a valuable way for people to supplement their income and bridge gaps in work. Last week couriers using our app in cities across the UK took home an average of £9-10 per hour during mealtimes, with many also using other delivery apps.

“Making improvements in response to courier feedback is a top priority, such as the free sickness, injury, maternity and paternity insurance we recently introduced. Our door is always open for feedback and we host regular events with local couriers to discuss questions or address any issues they’re having.”

“We are seeing young workers in particular from a whole range of different hospitality employers, but also these new tech monopolies that are using very old-fashioned forms of exploitation, and more and more young people joining their union,” she said.

“Very often, young workers are frightened, especially if they are on zero-hours contracts or sham self-employment, that they won’t get offered shifts if they do join up. We are also seeing among young people a sense that they have nothing to lose.”

A spokesperson for JD Wetherspoon said the pub chain had increased pay rates for its 38,000 employees by £20 million in the year ending July 2018 – around £521 per worker. It has set aside a further £27 million for pay increases this year.

Very often, young workers are frightened, especially if they are on zero-hours contracts or sham self-employment, that they won’t get offered shifts if they do join [a union],” – Frances O’Grady, TUC

Wetherspoon chairman Tim Martin said: “Wetherspoon intends to increase pay in real terms in most years, subject to economic conditions, as we have tried to do in the past.

“Everyone in the pub and restaurant industry works very hard and the late and early hours are extremely demanding.

“It is understandable that there is pressure on pay with low unemployment and a housing shortage. However, bonuses, free shares and other benefits should be taken into account in assessing pay.

“I don’t think it would benefit employees overall if, as some suggest, Wetherspoon ended bonuses, free shares and other benefits, and increased the basic rate of pay.”

A McDonald’s spokesperson said the four affected restaurants were open and that staff at fewer restaurants than previous demonstrations were taking part in the strike.

Earlier this year it increased pay to a minimum of £8 an hour for staff at all of its company-owned restaurants, following strikes at two restaurants in Cambridge and Crayford, south London last year.

TGI Fridays told the Guardian than less than 1% of its workforce was taking part in the strike. Deliveroo and UberEats were not available to comment at the time of publication.