House of Fraser rescue deal collapses with 17,000 jobs at stake 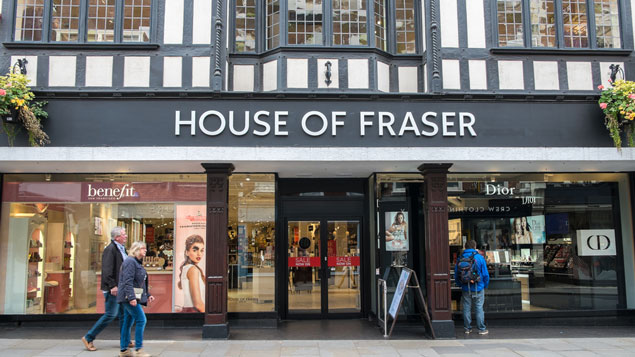 Hamleys toy store owner C.banner, which was set to invest £70m in the struggling department store chain, has pulled out because of a sharp decline in its share price.

It is thought that senior accountants at “big four” auditor EY are on standby in case House of Fraser goes under.

Andrew Busby, of the consultancy Retail Reflections, said the chain’s only hope for survival could be a merger with rival Debenhams, which is also under severe pressure and has been cutting store manager roles throughout the UK.

“House of Debenhams is becoming more and more of a reality − that’s the best outcome for House of Fraser,” Busby told the BBC. “Unless you are Harrods or Selfridges the department store concept is not quite dead, but severely challenged.”

Richard Lim of Retail Economics said: “This is a real blow to House of Fraser. They’re in desperate need of a rescue deal and without this fresh injection of around £70m, it’s almost inevitable that they’ll fall in to administration. This could be within a matter of weeks.”

Among those who may make a move to salvage House of Fraser is Sports Direct owner Mike Ashley, who already has 11.1% stake in the department stores and a 30% stake in Debenhams.

House of Fraser does not recognise shopworkers’ union Usdaw but Dave Gill, the union’s national officer, said the union was providing the support and advice to members and was “urging the company to ensure all staff are treated with dignity and are fully consulted”.

He added: “This news will decimate the hopes of thousands of staff who have been facing an uncertain future ever since the company announced it would close 31 of its 59 stores earlier in the year. House of Fraser is an iconic brand and it will be devastating for everyone involved if it goes into administration.

“I am urging the company to engage in talks with us so that we can work together to save jobs.”

House of Fraser avoided a legal battle over the store closures by coming to an agreement with landlords today (5 August). The closures make it more likely that a cash injection will be made to save it from collapse.

Retail analysts believe that C.banner lost enthusiasm for its investment − in addition to its share price fall − because of the prospect of the legal battle with landlords over the insolvency procedure known as a company voluntary arrangement.