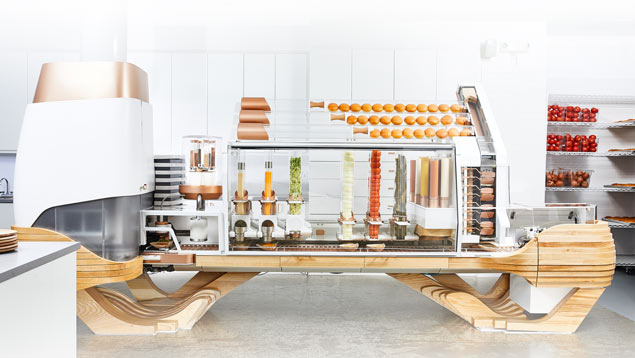 A burger 'bot' in operation at restaurant Creator in San Francisco. The machine can turn out 120 burgers an hour but the fast food outlet still employs nine people, which is thought fairly normal in the industry.
Photo: Aubrey Pick

Around 10 million workers – 37% of the UK workforce – are worried that automation will change their jobs for the worse, according to in-depth research published to coincide with the launch of a new Commission on Workers and Technology.

Almost a quarter (23%) of workers are worried that their current job may no longer be needed, according to the YouGov survey, which also found that few workers felt that government, employers and trade unions were doing enough to prepare for automation in the workplace.

The two-year commission, organised by the Community trade union and the Fabian Society, aims to identify the actions that government, employers and unions need to take to support workers as technology impacts employment over the next decade.

Automation in the workplace

AI’s impact on recruitment, HR and the workforce (webinar)

However, workers are broadly positive about their own ability to navigate change: three quarters (73%) are confident they will be able to change and update their skills if new technology affects their job.

After learning about how technological changes will affect the workplace, 53% are optimistic about their future working life and job prospects.

Speaking on BBC Radio 4’s Today, Yvette Cooper, chair of the new commission, said: “The big question is what kind of new jobs are created [by automation] and whether the technology is being used to empower and liberate workers and to give them more interesting, better quality jobs, or whether instead it is used to control and exploit people or create new injustices.”

She added that there are examples of technology being used to monitor and control people or “to make their jobs even more like machines’ jobs, rather than using machines to replace those awful jobs and to give people better jobs”.

The commission will address:

Roy Rickhuss, general secretary of Community, said: “These figures should serve as a wake-up call for all trade unions. The vast majority of workers in unionised workplaces do not believe we are supporting them to cope with technological change.

“Automation cannot simply be opposed, rather it should be made to work in the interests of working people. Our members are already dealing with the consequences of automation being managed badly. Government and business need to step up too, but trade unions have a central role to play.”

The commissioners are drawn from organisations including: the TUC, Prospect union, Community, Sage, Google, Nesta and the University of Oxford.