How progressive firms look to beat the skills gap 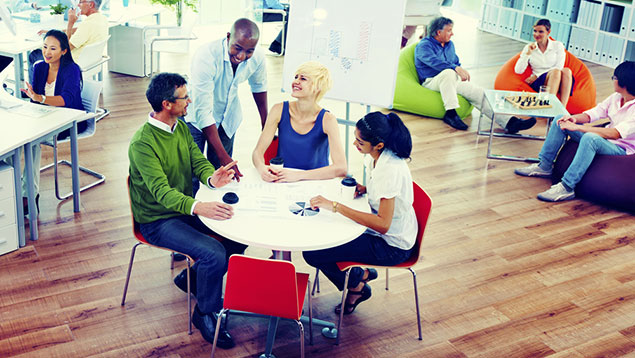 Fluid work practices, flexibility and agile reward schemes are the chosen route to beating the skills gap for a growing number of forward-looking businesses, according to a new study of organisations across sectors.

A New Deal for the Future of Work, from consultant Korn Ferry, surveyed 70 “leading” companies to glean evidence that industries are exploring alternatives to the traditional “give and get” style of reward in favour of more employee-centric approaches.

The study identified three key areas in which the businesses were developing a “new deal” that worked for them and their workers. The first involved the threat of digital transformation disempowering and disengaging employees. This was tackled by using technology to create “more varied and meaningful work”. Enabled by technology, more than two-thirds of businesses had created flexible teams to resolve specific issues, before disbanding them afterwards, providing employees greater flexibility in the way they work.

The second theme identified by the researchers concerned the firms’ response to dwindling numbers of skilled workers. This had led businesses to move from permanent workforce structures to more “liquid” models, which allow them to access specific skills and resources on demand.

Thirdly the study revealed how organisations were modernising the employee offering: how base pay and incentives were being redefined and personalised and how they linked to performance management. A trend was identified in which benefits were being made more portable, so they aligned with the growing fluidity of today’s career journeys.

“The relationship between organisation and employee is becoming far more reciprocal,” said Anthony McNulty, associate client partner at Korn Ferry. “If employers want to attract the best people and get the best from them, they need to offer them something they really want. Pay is important – but so is flexibility and the opportunity to grow. Leading organisations are going to new lengths to listen to their employees and constantly evolve their approach in light of what they hear.”

Leading employers were using sophisticated analytics to segment their people and create more personalised reward propositions, the study concluded. Although only 27% of those surveyed formally measured the effectiveness of their employee brand proposition against defined targets, 62% had started examining how they were perceived by the external labour market by monitoring third-party sites, such as Glassdoor.

As Personnel Today has revealed, one of the companies most effectively engaging with Glassdoor reviews is mobile network Three, which provided one of the case studies for the report.

This showed that the business was now applying similar market and segmentation principles for understanding, attracting and retaining its 4,000 UK employees as it did for its customers. Its HR function also reflected its customer-facing teams. One of the drivers for this approach, said the study, was the CEO’s decision to appoint a non-traditional HR professional to lead the function. The result has seen Three achieve a rating 20 points above the national benchmark for the wellbeing of its employees.

Deutsche Telekom, which has about 550 staff in the UK, forms another case study. The global firm has developed a SharePoint platform where employees can give up to 20% of their time to projects outside of their core role. This it claimed, allowed for flexibility without the contractual implications of making significant changes to roles and functions.

Employees at Deutsche create a skills profile so the platform can match them to suitable projects. If an employee would like to work on a project, they seek approval from their line manager and contact the project manager in charge of choosing the teams. There’s no formal performance management for the 20% projects.

Deutsche told researchers that the initiative had been well received by project managers and team members, because it brought together skills from all over the organisation and introduced more innovative approaches to solving problems.

The study concludes that the “’deal’ that sustained the traditional world of work is broken. Companies must adopt a more agile approach to how they shape and promote the employee experience.”