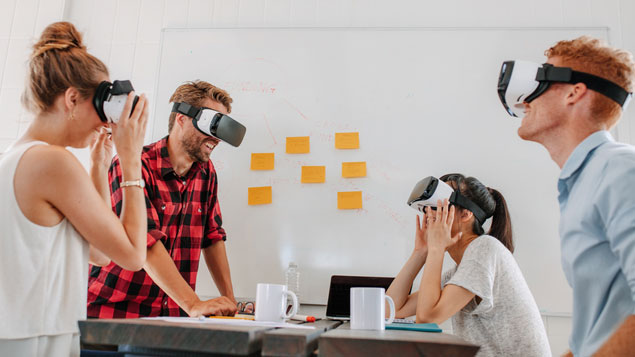 Could a virtual reality tour give candidates a better feel for an organisation’s culture before they apply? Cath Everett looks at a new VR initiative at consulting firm PwC.

There has been a lot of noise about the use of virtual reality or augmented reality in aspects of HR such as recruitment or learning, but it’s often light on real-life case studies.

Mindset and match: recruiting millennials is about more than speed

So it’s encouraging to discover that consulting firm PwC has started using virtual reality technology as a means of differentiating itself among young jobseekers as well as showcasing its tech credentials.

The ‘you visit’ virtual reality (VR) video, which was posted to the management consultancy’s US website in early May, provides potential candidates with a tour of its new Boston office so they can get an idea of what the environment looks like and gain some insight into the company’s culture.

Applicants are provided with 360-degree views of areas such as employee workspaces, the lounge and gym and also get to experience what it is like inside conference meetings, lunch gatherings on the office rooftop and mentoring sessions.

Alexa Merschel, PwC’s US campus sourcing and national talent ID leader, explains the rationale: “When we survey people who both join the firm or turn us down, the consistent thing they say that matters to them most is the people and relationships they form, the culture and environment, and the opportunities that exist.

“So it’s about trying to message the audience by showcasing the offices, demonstrating how people collaborate and work in teams, showing global mobility and career opportunities – and just what a fun environment it is to work in.”

The 3D VR video is also made available to jobseekers at careers’ fairs on university campuses, who generally respond positively to the environment as they are “used to interacting with games”, Merschel says.

As a result, the queues to view the videos tend to be long because the technology is “sexy and an attractor”.

“A lot of our rivals haven’t necessarily done this so we’re trying to differentiate ourselves and showcase our use of technology,” she explains.

“Rather than give out the usual pens or backpacks, we provide more interaction – so rather than exchange a pen, we offer a change of experience, which might hopefully grab people’s interest so they consider PwC.”

It took the company about three months to put together a business case and evaluate the return on investment for the initiative before shooting for the video began last October.

The business case was based on attracting new candidates using VR as a competitive differentiator; gaining external recognition, whether via student word-of-mouth or industry awards; and positioning PwC as a tech-enabled and innovative organisation.

To this end, Merschel also points out that its interview process has become more “virtual” too.

On campuses where the firm has a presence, it will undertake a first interview on site, but conduct a second through Google Hangouts voice and video app.

If it has no presence on a given campus, the entire interview process will be conducted online.

Meanwhile, candidates are also sent a mobile app tailored to the look-and-feel of their university to act as “one-stop-shop” for accessing information about PwC’s environment and culture, which includes its approach to diversity and activities such as coaching.

Only if candidates have a job offer in their hands will they be flown to the relevant office in order to meet their new colleagues in person.

The aim is to make it easier to engage in the interview process and also not to disrupt their education by taking them out of university for a few days.

“As an employer, we’re trying to hire in a competitive tech environment,” Merschel says.

“On our horizon and as a current strategic priority, it’s about leveraging tech to serve our clients and secure the future of the firm. So we want to showcase that we know how we use it effectively because it’s all-encompassing these days.”

There are currently no plans to roll out a similar initiative in the UK.