Employers have not ‘bothered to find UK people to work’ – IDS 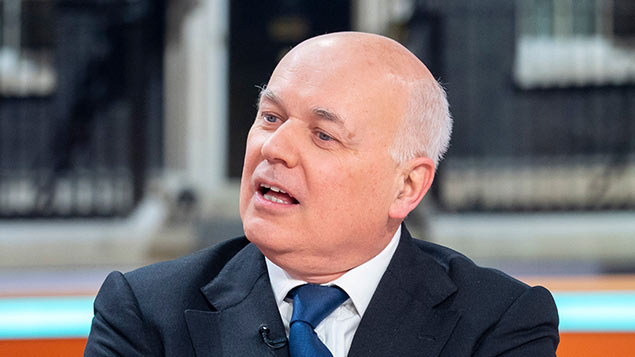 Former Tory party leader Iain Duncan Smith has said a lot of employers have “not even bothered to try and find UK people to work”, in response to calls from British business to scrap the UK’s “blunt” immigration targets post-Brexit.

A report from the CBI says companies want a new approach to migration after Brexit that remains open enough for the economy to grow, while having the right controls to build public trust and confidence.

The document, Open and Controlled – A New Approach to Migration, which provides evidence from 129,000 firms across 18 industry sectors, says that most credible economic studies show that immigration delivers net economic benefits to the UK.

The CBI recommends that the government drops its net migration target, which currently aims to bring immigration numbers down to the “tens of thousands”, and introduces a system that ensures people coming to the UK make a positive contribution to the economy.

Josh Hardie, deputy director-general of the CBI, said: “Freedom of movement will be ending. The building blocks of a successful new migration system for the UK begin with an honest and open debate that has been absent from politics.

“The stakes couldn’t be higher. Get it wrong, and the UK risks having too few people to run the NHS, pick fruit or deliver products to stores around the country. This would hurt us all – from the money in our pockets to our access to public services.”

But the Home Office has said it has no plans to scrap immigration targets. Net migration to the UK currently stands at approximately 240,000.

“After we leave the EU, we will end free movement and put in place a system which works in the best interests of the whole of the UK,” a Home Office spokesperson said.

“We are considering a range of options that will ensure that we are in control of our borders and managing migration, while continuing to attract and retain people who come here to work and bring significant benefits.”

The CBI report also recommends that:

“Foreign workers put in more than they take out,” added Hardie. “Their taxes – which pay for schools, hospitals and roads – outweigh the benefits they receive. And, as the Office for Budget Responsibility notes, higher net migration reduces pressure on government debt.”

The report’s authors argue that the UK should negotiate the simplest possible travel arrangements with the EU and preserve the easy mobility of staff, including intra-company transfers, temporary postings and temporary business visits.

Sophie Wingfield, head of policy at the Recruitment and Employment Confederation, said the CBI’s report provided a clear and evidence-based message from business.

“We agree with the CBI that as well as permanent staff, it’s vital that business can maintain access to migrant temporary and seasonal workers in post-Brexit Britain to plug candidate shortages and keep UK business growing,” she said. “Otherwise sectors including hospitality, warehousing, and food and drink will be hit hard.

“Recruiters are clear that we need a comprehensive mobility and migration deal in the EU exit agreement. Any new system should be based on the contribution people come to make, and not an immovable numerical target.”

Overseas workers fill roles across the full range of skill levels within the construction industry – from general labourers (40%), to skilled tradespeople like carpenters (11%), machine operatives (7%) and bricklayers (8%), through to graduate level roles including architects (16%) and civil engineers.

London has a particularly high dependence, with half the construction workforce in the capital being born overseas.

“The industry has committed to recruit, train and retain home-grown talent but a clear and sustainable migration approach that focuses on key occupations is urgently needed so we can bridge the gap.”

However, speaking on BBC Radio 4’s Today programme, Duncan Smith said a lot of employers had “not even bothered to try and find UK people to work”.

He said he welcomed the fact that the CBI was finally engaging in the “reality that people voted to take back control and that migration itself now will be controlled because we will be leaving the European Union and that means essentially no longer having freedom of movement.”

But he disagreed with the CBI’s approach: “I wouldn’t go down the road that they’ve gone… You basically extend the work permit process across both Europe and to the rest of the world.

“People can come here for work but they need to have work to come to and that work needs to have been agreed and accepted that there isn’t a person in the UK that could do that work, that has the skills to do that and that’s the way you control it.”

He added that employers could use Jobcentres to find British workers. He has outlined his proposals for post-Brexit migration on his website.