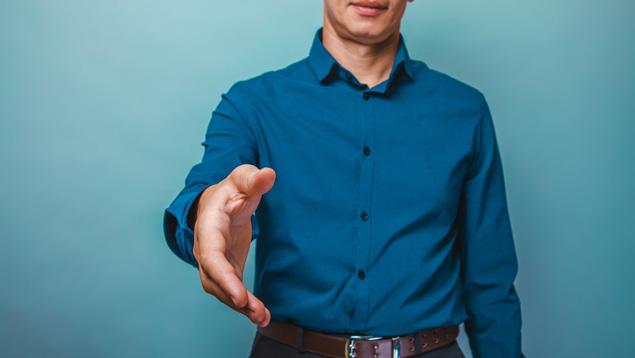 A Swedish Muslim woman has won compensation after her job interview with a translation company was swiftly ended when she declined to shake hands with a male interviewer.

Farah Alhajeh, 24, was a candidate for a job with language services firm Semantix in Uppsala, north of Stockholm, in May 2016 when the person conducting the interview offered to introduce her to a male boss. Alhajeh said her response was to smile, turn down a handshake, and put her hand on her heart as a greeting, while explaining that her religion stipulated she should avoid physical contact.

She was then shown to the lifts, leaving her, she said in tears and feeling as though she had been “punched in the face”.

Belief as a protected characteristic

Religion or belief discrimination: Dismissal of Christian teacher who stood by convicted husband was discriminatory

Earlier this week a Swedish labour court ruled that Semantix should pay her 40,000 krona (£3,420) in compensation in a case bought by the equality ombudsman.

The court heard that Alhajeh “adheres to an interpretation of Islam that prohibits handshaking with the opposite sex unless it is a close member of the family”.

She told the court that when she tried to discuss the issue with Semantix employees she was told the fear of bacteria might be a reason to refuse a handshake but not her faith.

The court concluded, in a 3-2 split verdict, that “the woman’s refusal to shake hands with people of the opposite sex is a religious manifestation that is protected under Article 9 of the European Convention on Human Rights.”

According to the New York Times, the labour court accepted that the company was right to require that employees treated men and women equally, including greetings, but it could not specify that the greeting should involve shaking hands.

Head of litigation at the ombudsman’s office Martin Mork said that the court’s verdict had struck a balance between gender equality and religious freedom, but Lars Bäckström representing the company said the ruling had gone against Swedish laws prohibiting discrimination in the workplace because of gender.

He was quoted in the New York Times as saying “When it comes to employees who meet clients and other external people, it’s up to the employers to decide whether employees can manifest their religious or political affiliations.”

Alhajeh, welcoming the decision which she said was “never, never about money” and that she had expected to lose, said that she greeted men and women the same way in mixed company, by bringing her hand to her chest. But if she was meeting only with women, she might shake hands, she said.

She said that she recognised the need to express her religion in a way that was acceptable in Sweden. She told the BBC: “I can live by the rules of my religion and also at the same time follow the rules of the country that I live in.”

“We live in a society where you have to treat women and men the same,” she said. “I know that because I am Swedish.”