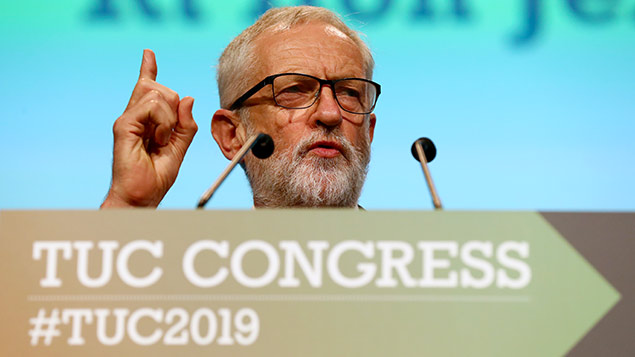 A future Labour government would create a ministry of employment rights and a workers’ protection agency, Jeremy Corbyn has announced.

The Labour leader, speaking at the TUC Congress in Brighton, said a Labour government would bring about the “biggest extension of rights for workers that our country has ever seen. We will put power in the hands of workers”.

The department would deliver better wages, provide greater security and give workers more say in how their workplaces are run. Within 100 days of arriving in office, Corbyn said Labour would repeal the “Tory trade union act”. It also said it would ban unpaid internships.

Working with the trade union movement, Labour will start a green industrial revolution creating 400,000 well-paid, high-skilled, unionised jobs in renewable energy and green technologies and we will locate these new industries in parts of the country that have been held back by successive governments; that have focused on the richest in the City of London” – Jeremy Corbyn

“Labour will deliver a real living wage of at least £10 per hour for all workers, from the age of 16,” said Corbyn, “action on the gender pay gap, equal rights for all workers from day one and the end of zero-hour contracts”. Workers on the minimum wage aged 16-17 are currently paid £4.35 per hour, while 18- to 20-year-olds receive £6.15.

To enforce the laws, Corbyn would create a protection agency “with real teeth” that would have the power to enter workplaces and bring prosecutions on workers’ behalf.

“Last week the Financial Times said that Labour is, and I quote: ‘determined to shift power away from bosses and landlords and to workers and tenants’. Well there has been no shortage of rather unkind reporting about our party over the last few years, but this time they’ve got it absolutely right.

“We will put workers on company boards, and give the workforce a 10% stake in large companies paying a dividend of as much as £500 a year to each employee.”

“It’s no coincidence that the same period has seen a sustained attack on the organisations that represent workers – trade unions.”

Josh Hardie, CBI deputy director-general of the CBI, accused Labour of making the proposals “in isolation from business”.

“They fail to reflect the reality in workplaces around the country,” he said. “The vast majority of firms thrive on strong employee engagement, invest in training and prioritise wellbeing. They support jobs, sustainable wage rises and enforcement of employment law. A fundamental re-write of regulation is the last thing the economy needs right now.

“Signalling widespread renationalisation wilfully ignores the many strengths that firms bring to the delivery of high-quality public services, including vital investment and innovation.

“At a time when the UK is already on the watchlist for international investors, these proposals will do further harm to our economy. We ask Labour to rethink and engage with business to restore confidence, or risk harming the very people they are seeking to help.”

Corbyn said: “The super-rich and the giant corporations will never solve the major design flaws in our economy that are causing the problem, because interests are tied up with them.

“And we will locate these new industries in parts of the country that have been held back by successive governments; that have focused on the richest in the City of London.”

The Ministry will be responsible for transforming our workplaces by delivering a huge rollout of individual and collective rights at work and implementing enforcement powers to make these rights meaningful.

Labour said the workers’ protection agency would support for good employers through tougher penalties for bad employers who undercut them by breaking the law and tougher consequences for non-compliance with court orders.

A Labour government would introduce “sectoral collective bargaining” by establishing councils of worker and employer representatives that negotiate collective agreements with minimum terms, conditions and standards for the whole of the sector and guarantee a legal minimum for every employer in the sector to adhere to on a core set of issues, including pay, working hours and recruitment and grievance processes.

The TUC called for improvements to collective bargaining last week, claiming that decreased access to union representation on wages could lead to a return to 19th century working conditions.

Labour would also create a single status of “worker” for everyone apart from those genuinely self-employed; end “Swedish derogation”, which permits employers to pay agency workers less than regular staff; introduce a civil enforcement system to ensure compliance with gender pay auditing; give all workers the right to seek flexible working, placing a duty on the employer to accommodate requests; and ban zero hours contracts by requiring employers to give all workers a contract that accurately reflects their fixed and regular hours.

One Response to Labour would create ‘Ministry of Employment Rights’