Man versus machine: how to handle resistance to technological change 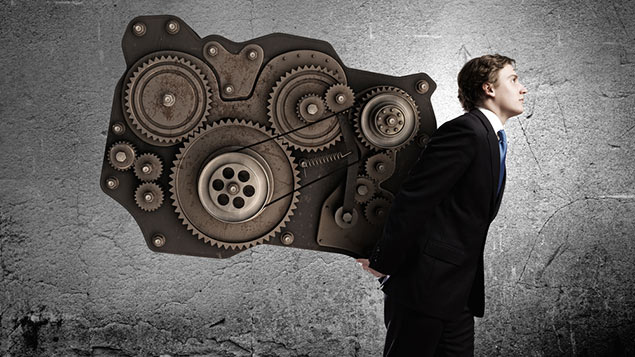 With some employees in China smashing machines over concerns that their jobs are being replaced, Virginia Matthews asks: are we entering a new era where technology is the cause of workplace friction? And will HR face a similar battle as digital working takes hold?

If you thought shouting at the self-service till at the local supermarket was as bad as it could get, think again. Frustration with technology is becoming ever more widespread.

In fact, according to the Worldwide Trends 2014 report from global ad agency JWT, “Rage against the machine” is one of the most important trends this year.

JWT and other forecasters term this growing paranoia around technology (particularly anything affecting privacy) “Neo-Luddism”, and it is a disquiet that is gathering pace in the workplace, too.

Among the employers to have come up against this include Transport for London, which has seen industrial action over proposed changes including driverless trains; contractor ISS, where workers faced the sack for refusing to clock on using biometric fingerprinting, and white goods manufacturer Miele, which incurred the wrath of engineers with the introduction of tracker systems in vans.

End of an era?

High street bank Barclays has endured dwindling demand for face-to-face banking services, and has been forced to make around 1,700 customer-facing staff redundant this year, adding to the 200,000-plus jobs that have disappeared from the UK’s financial services sector overall since the recession took hold.

Raymond Pettit, managing director of community banking at Barclays, says that the bank’s approach is “one of digital working alongside human”, adding that: “It’s in that order because although we are undoubtedly a very people-oriented organisation, particularly for those who use our 1,500 branch network on a regular basis, the business is also firmly technology-led”.

Bank staff are punch drunk with the endless changes to their roles” – Dominic Hook, Unite

Unions have condemned the changes sweeping through the banking sector, with Dominic Hook, national officer for finance at the trade union Unite, claiming that bank staff are “punch drunk with the endless changes to their roles”.

Pettit, who notes that the majority of outgoing staff have opted for voluntary redundancy rather than re-training, sees it differently: “Of course there is fear about the future and, undoubtedly, some colleagues react better to technological challenges than others,” he says.

“But, in general, staff believe that if technology is good for our customers; which cashless payments, mobile and online banking undoubtedly are, then it’s good for staff too.”

Incidents of tampering with, or even destroying, high-tech equipment remain rare in this country, but in China, smashing up machines in frustration is increasingly common, according to David King, of the lobbying organisation Luddites200.

So, could this sort of direct resistance to technological change become a real headache for HR? King argues: “If many of the predictions are correct, up to 50% of current jobs will disappear over the coming years as society is deliberately de-skilled and we think it very unlikely that workers will accept this situation without a murmur.”

“There have already been incidents of resistance on a local level in both warehousing and retail, but any hint of Luddism tends to be kept out of the newspapers,” he adds.

Ironically, the war for talent in the upper echelons of organisations is being more than matched by the rapid displacement of less-rarefied blue- and increasingly, white-collar jobs.

A study late last year by Oxford University suggested that around one-third of UK jobs would be lost to robotisation by 2030.

In its examination of more than 700 job categories, it identified sales assistants, book keepers, payroll managers and procurement clerks as most at risk of redundancy, along with switchboard operators, typists, auditing clerks, local government admin staff, and checkout operators.

It believed that surgeons, dentists, office managers, supervisors, nurses, midwives and the clergy were among those with the lowest risk of being replaced.

According to the CIPD, employees’ concerns over job losses are compounded by a failure to communicate developments properly with staff. Its latest research into agile working found that only 18% of UK employers offer rapid re-training when jobs are lost (or 20% in the private sector).

“Automation will undoubtedly bring with it even more loss of jobs, but new roles can take their place if there is sufficient commitment to rapid re-training, by which we mean a combination of formal and on-the-job,” says Ksenia Zheltoukhova, a research adviser at the CIPD.

“HR professionals need to understand that the world of work is changing very fast, but by reacting in a more agile way to the impact of technology and investing in necessary up-skilling, employers can retain staff for the next wave of jobs growth.”

With 27% of employees now worried that their skills may not be relevant for the future according to CIPD, Zheltoukhova believes that more reassurance is in order.

“We do see worry and concern over the introduction of new technology and, while it brings to mind the major industrial disputes of the past, the difference today is that the skills being lost are not being replaced at the same speed,” she says.

By reacting in a more agile way to the impact of technology and investing in necessary up-skilling, employers can retain staff for the next wave of jobs growth” – Ksenia Zheltoukhova, CIPD

“These changes in technology don’t happen overnight though and we believe employers should be assessing the impact of new technology on their people well before they are implemented.”

For the 2,000 staff at Ford’s engine plant in Bridgend, Wales, where £750,000 will be spent on employee development over the past year altogether, rapid automation is a way of life in addition to internal development such as apprenticeships and on-the-job training.

“This company has invested in new technology and automation for many years and Bridgend employees accept this as normal business and take a positive view of such investment in their plant,” says Stuart Townson, HR manager.

“Re-training existing employees means that Ford continues to benefit from the skills development already invested and this is normally preferable to hiring a brand new employee.”

While the company has in place an agreement that no employee will be made compulsorily redundant as a consequence of the introduction of “new technology and increased efficiency”, Townson agrees with the CIPD that ongoing communication is essential.

“It’s really important to talk to employees and provide the business case for change. Most people will accept change if it improves long-term efficiency and job security and employees who are consulted tend to be more cooperative than those who have such change imposed.”

“Employees are likely to be hostile to developments that threaten their employment and without this reassurance, they have reduced incentive to cooperate,” he adds.

For Barclays, testing out new technology on staff encourages cooperation: “We develop and refine new technology in collaboration with colleagues and that way we keep it relevant to employees and, above all, useful to customers,” says Pettit.

“Our colleagues know full well that other industries have suffered by not becoming digitally-oriented fast enough – just look at HMV or Blockbuster – and the fact is that if we don’t become digitally-led, we simply won’t take our customers with us.”

Nick Wilson, managing director of public sector and health at Capita IT Services, sees “helping staff to adapt to new ways of working” as a vital part of his job, saying that: “We are careful to explain the benefits of the technology and offer support right through the implementation process, and in many cases, our solutions offer a great opportunity for staff members to focus on more strategic business issues.

“What is sometimes more challenging is helping organisations get ahead of the curve before a major challenge to their business occurs, however, because the real opportunity is using technology to stay ahead.”

Zheltoukhova believes that retaining the loyalty of current staff should be a number-one concern, over and above any benefits technology can bring to an organisation.

Look to the long term

“People want to work and it’s up to employers to reward their loyalty and engagement by finding them other jobs,” she says. “Of course employers must weigh up the savings to be made by the latest piece of machinery, but hopefully, the majority are looking to long-term prosperity rather than short-term gain.”

Freek Vermeulen, associate professor of strategy and entrepreneurship at London Business School, believes that it would be naïve to think that there will not be industrial action over automation in the months to come, but argues that this does not mean organisations should change their plans.

“Of course, there will be protests and even deliberate machine damage and yes, many traditional jobs will go and people may need to move to new sectors in order to replace them. But this whole process doesn’t mean the end of work, just work as we currently know it.

“In sectors facing a real challenge – local government for example – organisations which were previously slow to change have embraced technology as a way of reducing costs and are now engaging much more effectively with citizens in the delivery of services.”

And although most of us may find that machines can do our current jobs better and more efficiently than we can (robot journalists are already “filing” business news copy to some international newspapers), Professor Vermeulen believes that HR may be one of the few job functions to survive intact.

He said: “According to research from the US, human beings express more satisfaction when something like work scheduling is done by a robot because it is not only less vulnerable to error, but is fairer and less emotionally-driven in its approach.

“In jobs such as logistics, where you make complex decisions based on algorithms, robots can clearly do a better job than us, but when it takes face-to-face communication and sensitivity, human beings are still way ahead.”