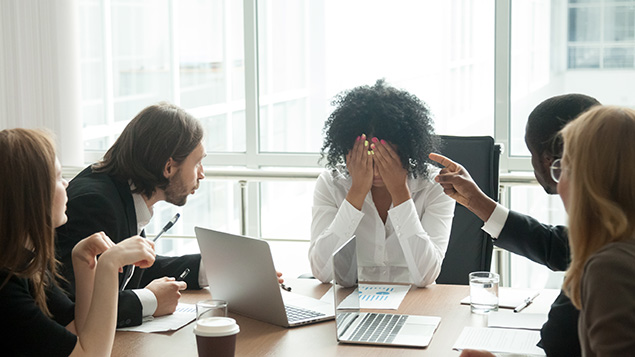 The CIPD found that 24% of employees felt harassment was ignored

Almost a quarter of employees believe that – despite the rise of movements such as #MeToo – bullying and harassment at work is swept under the carpet.

The CIPD surveyed both employers and employees about their views on harassment, and a significant proportion of employees said managers often made the situation worse.

Four in 10 of those who’d experienced bullying or harassment said their manager was responsible, while 34% said managers’ lack of confidence to deal with harassment meant conflict was not being dealt with effectively. Only two-fifths of managers said they had undergone any sort of people management training.

More than half (53%) of those that had experienced harassment in the past three years had not reported the latest incident.

Focus groups with individuals who had experienced harassment revealed the negative impact it can have on those affected, with many reporting stress, insomnia and increased levels of anxiety.

One employee said: “I had to have antidepressants and counselling. I still can’t go to the town where I worked because of panic attacks.” Another took a job with a lower salary because conflict at work increased their anxiety.

Rachel Suff, senior employment relations adviser at the CIPD, said that it was up to managers to be positive role models, setting expectations of behaviour around dignity and respect.

“The number of managers who are being blamed for harassment and bullying should serve as a wake-up call to employers to put training managers at the heart of efforts to prevent inappropriate workplace behaviour,” she said.

“Our research shows that managers who’ve received training can help to stop conflict from occurring and are much better at fostering healthy relationships in their team. And when conflict does occur, they can help to resolve the issue more quickly and effectively.”

The CIPD has produced a guide for managers on how to deal with conflict in their teams. Its suggestions for employers include:

The CIPD’s survey also revealed that one in 10 people had been bullied or harassed via email or social media, or by phone or text.