Moving to Manchester: HR and the BBC’s relocation challenge 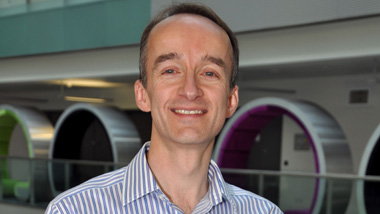 The BBC has been making the news as well as breaking it this week, announcing that it will slash 2,000 jobs by 2017 as part of an effort to cut 20% from its budget. But, while the organisation sets out plans to make these savings, it has also been undertaking a huge relocation and recruitment effort to populate the new BBC North buildings in Salford, Manchester. Laura Chamberlain talks to BBC North’s HR director Ken Lee about the challenges of making the move.

To understand the scale of the project, it is worth bearing in mind the vast numbers of people that the HR team are bringing into the Salford buildings. By next Easter, 2,300 members of staff will have been moved into the new offices through recruitment or relocation.

Around 700 workers will come from another Manchester office, which is closing, and around 1,500 positions will be relocated from London. Of those London jobs, 55% will be filled by people who chose to make the move and 45% will be new recruits.

Even before the BBC announced its recent budget cuts, BBC North’s move to the new site had not escaped criticism. It has been described as a waste of money by some, and reports of staff mutinies and revolts against the relocation have been frequent features of coverage of the move.

Lee, however, does not feel that this is the case: “One thing that hasn’t been reported, because it’s not such a good story, is that over two and a half thousand BBC staff whose jobs are not moving to Salford have applied to make the move.

“Yes, we’ve got some staff having to make some quite difficult personal decisions about how they can manage themselves, their careers, and their personal lives, but we actually have more people applying to move than we have jobs scheduled to move in the first place.”

Ultimately, though, for some employees, the upheaval of moving from London to Manchester is not a journey they wish to embark on. Lee explains that, during the relocation briefings, the objective was always to inform employees, rather than try to persuade them to make a move they were unhappy with.

“There are two things that really make a difference,” Lee says. “The first one is flexibility and the second is information. They need to come and see the city, feel what its like, see some of the surrounding areas, and actually be able to make a balanced judgement.

“What we’ve always said during the relocation briefings is that the objective is not to persuade people to come to Salford, it is to make sure everyone has got enough information to make the right decision for them because, for some people, domestically, the move may just not be right and we’ve got to respect that and work with them in terms of what their next move would be either inside or outside of the BBC in London.”

Lee also stresses the importance of being flexible with the relocation plan. And with hundreds of people to relocate, all with differing personal circumstances, this is not an easy task.

For example, he says that the most important thing for those with children is support and information about areas such as choosing and moving schools, entrance exams, catchment areas and cut-off dates.

“I remember quite early on in the process one staff member said to me ‘I could have the best job in Salford, but if my kids don’t settle in at school it’s not going to matter to me’,” Lee explains. “Its about really picking out the parts that matter.

“The relocation project has really prompted us to do what HR people always say we do, but don’t always do as well as we should, which is to see the whole person.

“They are not just numbers on a spreadsheet, they are people with families and their own domestic circumstances, and a relocation as big as this actually draws out all of that.”

One risk of the move is that, as the team rapidly attempts to fill the positions of those who have not chosen to relocate, skills could be lost as new recruits fill the roles of experienced staff.

Lee explains that, although they have lost some good people, the large recruitment drive is an opportunity to bring in some fresh talent.

“What we have to be realistic about is that there are a number of very talented people with lots of very good BBC experience who can’t make the journey for us and we are really sorry to see them go.

“We have to manage around that and decide how best to replace them. And that’s about getting in some media-skilled people but it is also about bringing in some new entrants and recruiting people from unexpected directions so that, as well as replacing the skills that we’re losing, we don’t lose that opportunity to change the chemistry and the DNA of the place.”

And this idea of recruiting from “unexpected directions” is one that runs throughout the HR strategy at BBC North. In its quest for diversity, through recruitment and through its apprenticeship scheme, the organisation has purposely sought out people from disadvantaged backgrounds who have not had the chance to study but do have an untapped resource of raw talent.

“What’s really important for us in terms of diversity is that we are absolutely committed to being representative of our audiences. We can only deliver content that speaks to all of our audiences if we are really diverse in terms of our workforce and the people who influence and make that content,” Lee says.

He adds that the dedicated recruitment website for BBC North has been a big help in this mission for diversity as, by its nature, it has appealed equally to people from all backgrounds. However, they have also directly targeted local people as part of the attempt to hire a diverse range of workers.

“We’ve made some very determined efforts to reach out to the local communities here, including some of the most disadvantaged areas, and make sure that we bring in people who are from social backgrounds that wouldn’t otherwise have expected to work for the BBC,” Lee says.

“There is sometimes this perception that the BBC is a very safe, conservative, middle-class kind of recruiter. I haven’t found it like that since I joined three years ago but there’s still that perception around. We’ve had to work hard to dispel that perception and find some more innovative ways of attracting diverse candidates.”

One particular avenue through which they have chosen to do this is the apprenticeship scheme at BBC North. Although Lee says that if the organisation advertised media apprentices generally across the website they would be in the “fortunate position” to be able to pick from very well qualified graduates from top universities, he believes that if that’s all they ever did, they could never move the organisation forwards.

“We’re reaching out and bringing in people from these communities who have got lots of raw talent, very raw sometimes, they do not strictly have qualifications, but we know they’ve got what it takes.

“We’ve actually based our apprenticeships on the very old-fashioned model. It’s the kind of apprenticeship my dad did as a cabinet maker in the 1940s, where you came in and you did training but you were actually there to do a job.”

Lee also believes in trying to retain this talent in the organisation once the apprenticeship ends: “I wouldn’t want to bring in any of those people if I couldn’t look them in the eye and say: ‘If you do the business, if you work hard, there’s a job here for you. Whatever your background, you could be a BBC employee off the back of this.'”

But while Lee and his team strive to create a fresh and diverse workforce, they are still only half way through the move to Salford, which will be completed by Easter 2012. The recruitment effort is going well, with nearly 600 people now recruited out of the 700 to 800 needed by the end of the project, and over 68,000 job applications received through the BBC North website. But what will be the challenges for the team once the move is complete?

“I think it will be about making absolutely sure that what we build here, what we deliver to our people and our audiences, is exactly what we promised,” Lee says.

“We’ve had this debate with my boss, Peter Salmon, that next Easter – when BBC Breakfast will be doing three hours network TV everyday from Salford – will it be the finishing tape or the starting gun? It’s actually both but, for me, the emphasis is on the starting gun because that says ‘right we’re here, we’ve got all these lovely people, these fantastic facilities, wonderful career opportunities’, that’s when we have to make it real and really develop our people to the maximum.

“If we do that, it delivers the content to the audiences and, in the end, that’s why we’re here. We don’t stop, we start the next phase.”