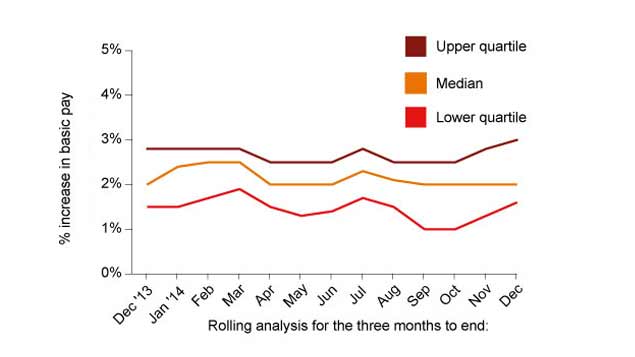 Despite increased optimism in the economy, pay awards in 2014 ended the year below where they started, according to latest figures from XpertHR.

The median basic pay rise for employees remained at 2% during the final three months of the year, and it was also was the most common pay award given during that period.

The manufacturing-and-production sector offered the highest pay rises, with a median 2.8% pay award. Meanwhile, public-sector pay awards inched above the 1% pay rise cap to 1.5% in the 12 months to the end of December last year, compared with an overall 2% in the private sector.

Predictions for next year settle on a 2% median pay award for the 12 months up to August, and the first deals of this year confirm this.

Encouragingly for employees, pay awards have now fallen below the level of retail prices index and consumer prices index inflation, which were 1.6% and 0.5% respectively at the end of last year.

However, as pay and benefits editor Sheila Atwood points out, this positive situation has more to do with “falling inflation indices rather than companies giving employees higher increases”.

Atwood predicts that pay rises are unlikely to rise dramatically during 2015. She added: “Details of the first pay awards for 2015 suggest that this trend for subdued pay awards is going to prevail.”