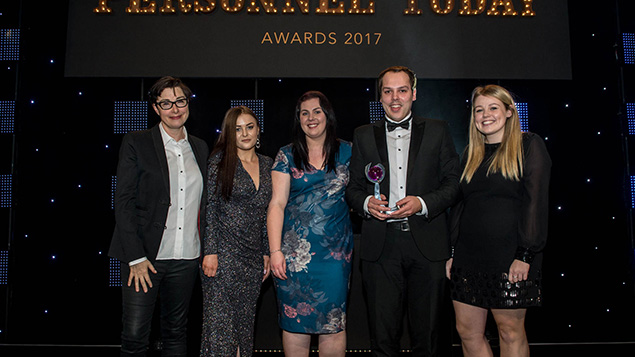 Each of the entrants for this category recently launched initiatives that have increased youth employee numbers with pre-employment support and work experience but Wolverhampton Homes’ successes drew particular admiration from the judges.

In response to these factors, WH is targeting young people among its tenants as recruits.

In 2016, 80% of WH’s recruitment went through the LEAP channel. To date, 9% of the workforce is employed through the programme. In September 2016, the Skills Development team’s target was to enrol 934 young tenants on BCI within two years and to date keyworkers are working with 224 individuals.

The BCTG target is to work with 40 young people per year and to ensure that at least 70% of them achieve positive outcomes.

Centrica supplies energy and energy-related services to more than 28 million customers in the UK, Ireland and North America. The company has taken a lead in recruiting apprentices, and has a partnership with Business in the Community (BITC) to promote careers in energy and increase interest in engineering among young women.

Together with partners in Movement to Work, since the end of 2013 Centrica has organised placements for over 50,000 young people. The programme offers visits to customers’ homes with engineers, experience in customer contact centres, and also a chance to learn what it is like to be an apprentice in one of the British Gas Academies.

The company is developing Movement to Work to help tackle youth unemployment, and is working to recruit other organisations to join the movement and provide opportunities into employment and training.

This year the pre-employment training period of the programme is being extended to allow attendees more time on work experience placements, providing extra opportunity to people from a diverse background, including creating an offering for single parents, those with a disability and those who are ex-military.

At the end of 2011-12, the percentage of 16-24 year olds in the CPS workforce was low at 1.3%.The CPS needed to ensure quality administrative support and casework assistance, so in 2012 a scheme was launched, recruiting apprentices to full roles, working with the same job descriptions as non-apprentices.

An apprenticeship lead in the CPS resourcing team works with training provider DAMAR to design bespoke learning for a career with the CPS. Innovative ways to support apprentices include: apprenticeship champions to ensure managers have someone to channel queries through; workplace etiquette sessions on interpersonal skills; and networking opportunities.

Apprentices start on the same salary scales as non-apprentices and have access to the same induction and individual learning accounts worth £350, as well as specialist training. There is a quarterly Apprentice Award. Managers can submit a business case so an apprentice can fill a role on a permanent basis.

Since 2012, 552 apprentices aged 16-24 have been employed, helping increase the number of 16-24 years olds employed by CPS to 5.1%. CPS has retained 197 apprentices on permanent contracts. The CPS staff survey shows employees aged 16-24 having a higher employee engagement index than any other age group.

L&Q is one of the largest housing associations in the UK. A recent merger with East Thames HA created a 90,000 home, £22 billion housing charity and led to a refresh of L&Q’s core values.

Youth unemployment is higher than the national average among L&Q’s residents.

Recruitment has moved from sector-specific media to targeting passive candidates through direct sourcing on platforms such as LinkedIn.

To attract apprentices, L&Q has sent text messages to residents and visited year 11s at local schools. At the London Learning Consortium Awards in May 2017, L&Q won Employer of the Year and Ellie Badcock won 16-18 year old Apprentice of the Year. L&Q has two existing cohorts of graduate trainees, who were recruited from universities in London and the surrounding areas. Most are guaranteed a job at the end of it.

Sixty per cent of apprentices have gone on to paid employment at L&Q, five found work elsewhere, so 71% went onto paid work overall.

The L&Q Foundation was set up in 2011 to improve people’s chances in life by creating opportunities and projects that tackle disadvantage and social inequality. The annual £4m budget supports a variety of community services.

Guy’s and St Thomas’ NHS Foundation Trust in the London boroughs of Lambeth and Southwark covers a diverse community with 37-42% of 19 year olds lacking qualifications and an unemployment rate for young people at least double that of the rest of the population.

In 2012 internal research showed that less than 2% of the Trust’s workforce were under 25. Vacancies and temporary spend was high, and many staff were due to retire over the next couple of decades.

The Trust has a widening participation strategy and training and development strategies. Since April 2015 more than 5,000 young people have registered on the Trust’s Discover Healthcare website which introduces children and young people to opportunities in the NHS. A work experience programme provided 720 work placements for young people aged 14-21 in 2016.

Since introducing apprenticeships in 2012, the workforce aged 16-24 has increased from 2% to 9% of the total, saving over £155,000 in salary costs by hiring apprentices in business administration between September 2014 and April 2016.

In September 2016, only 15% of TfL apprentice starters were female and just 34% came from BAME backgrounds. In London 51% of the population are women and 43% are black, Asian and minority ethnic (BAME), yet only 24% of TfL’s workforce are women and 27% BAME. TfL also aims to hire 20% women in STEM (science, technology, engineering and mathematics) by 2020.

A new recruitment strategy and outreach initiative, Moving Forward, was introduced in September 2016, aiming to recruit over 200 apprentices across 24 schemes from level 2 to 6.

Rather than relying on careers fairs, the scheme has run 140 school events, and collaborated with the Royal Borough of Newham on a careers fair with 400 attendees, including NEETS (not in education, employment or training) and ex-offenders. This gained 198 apprentice applications.

STEM ambassadors guided girls to quantity surveying (QS), gaining a yearly increase (188%) in the number of applications for QS positions.

Moving Forward has achieved a 76% increase of female hires in 2017 from last year, with overall 21% female hires and 37% BAME.