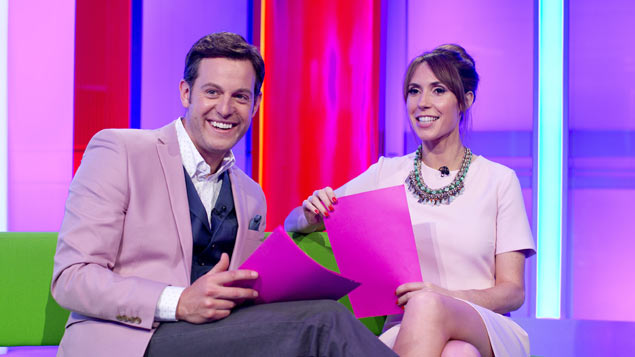 Matt Baker and Alex Jones on The One Show – A memo suggested a new reporter should be northern and from an ethnic minority. Photo: David Bebber/REX/Shutterstock

The BBC made headlines recently with claims it was favouring candidates from certain minorities and age groups. But if diversity efforts are stalling, organisations have to make change happen, says Patrick Voss.

The BBC came under fire last week after a leaked memo appeared to show a desire to recruit new presenters for The One Show from a particular age group and ethnic minorities.

An internal email from a producer asked for candidates to be male, over the age of 30 and hail from an ethnic minority.

The BBC hit back, saying the email “was not a job advert” and claiming that all casting decisions were based on merit.

But while positive action, including setting quotas, isn’t ideal, if systems have been in place for a while and not much is changing, then occasionally drastic action is needed to force a transition.

Many companies make positive steps when it comes to diversity in the workplace, but even some of the most committed struggle to see dramatic results.

If you are considering your options, or re-assessing where you are, where might you start?

Take a step back

The first step is to have a clear focus as to why a diverse workforce is important for the organisation.

Being able to outline the company vision and approach clearly to employees is critical in encouraging buy-in. Be clear about why this is a strategic priority for the company and not just a brand exercise.

It may not just be about ethnicity, but could include broadening the diversity of skills, experience, culture and background in order to harness the best mix for the company or specific teams.

For many organisations, for example, there is a clear business need to reflect the expectations of clients, partners and other stakeholders.

At the most basic level, simply head out into the organisation and look around. Do teams/departments look the same? Are there more men or women? What is the average age?

Some of this you might not be able to influence easily – for example, where your team may mirror the local population.

Dig out the data

Taking things a step further, look at the data that already exists in the workplace. Diversity and inclusion data can come in many different shapes and sizes, from recruitment details to employee surveys or evaluations such as benchmarking against peers.

This may give an overarching view as to whether or not teams reflect the company’s clients and if there are any key skills, experience or strengths missing.

There will be some roles where the pipeline and representation of groups and cultures will be at different levels.

Challenge internal or external recruiters to cast outside of the traditional pool and see what else is out there.

Perhaps spend 10 minutes personally posting jobs in one or two new forums. You never know, you might get a number of people through the door that would surprise you.

When staff from different ethnic or cultural backgrounds come through to interview, their own expectations and perceptions, as well as the company’s approach to interviews, may have an adverse impact on any outcome.

For example, if anecdotal stories being told at interviews or induction meetings refer to drunken nights out or a particular employee “just liking a good joke”, that can speak volumes to people who don’t come from the same culture or feel like they don’t fit in.

For firms really wanting to level the playing field, running admission programmes that cater to the diverse range of needs of potential employees outside of the hiring process can have a big impact.

These can help build a committed pool of potential talent, and allow different groups of people to get to know the company and its culture.

They can also help employees gain a better understanding of potential candidates, making all parties feel more comfortable, especially when it comes to interview.

While it’s easy for HR teams or executives to create diversity and inclusion programmes and priorities, it’s up to line managers to implement these as well as meet their own targets.

Understanding how to learn from and approach potentially awkward conversations is critical. Any training must avoid becoming too directive, so that participants don’t feel patronised or turned-off.

The key is self-awareness. Line managers require support to help them become more comfortable in understanding what they do and don’t know and being open enough with employees to have the conversations that both sides may initially find challenging.

They could speak to colleagues and peers – one way to do this is through employee networking groups – to understand any issues people find difficult to discuss.

Creating simple scenarios based on this and discussing how they might approach each topic is a great way to boost confidence.

On a more practical level, companies could look for opportunities where change can take place.

For example, if one person leaves an established team and needs to be replaced, or if the team is growing, it’s the perfect time to take a step back and look around.

Instead of replacing or adding like-for-like, would a different set of skills, approach or experience help challenge the team to perform better?

As the BBC found out, there may be unintended consequences, both politically and culturally, for contemplating such direct steps for tackling diversity, but no-one can afford to bury their head in the sand.

Organisations must start with what they can change and then keep going from there. It does get easier, and it will bear fruit. Just set a starting point and evolve with the world around you.

Patrick Voss is the managing director of Jeito, a culture and engagement consultancy with diversity and inclusion at its core.
View all posts by Patrick Voss →
Previous Article
Next Article