By Jo Faragher on 6 Jul 2016 in Brexit, Employee relations, Retention of staff 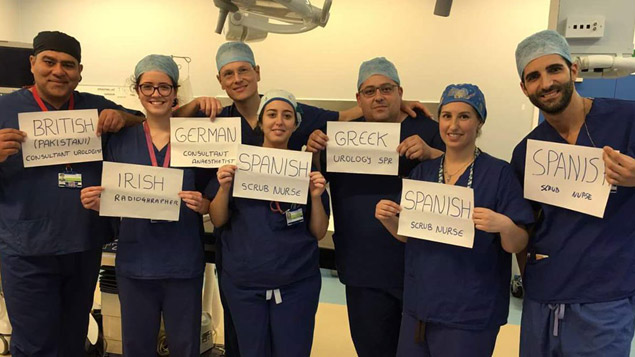 The hashtag #loveoureustaff has emerged to offer EU workers reassurance and thank them for their contribution.

There’s no doubt that the Brexit vote sent shockwaves through workplaces across the UK, whichever side staff voted. Some employers have emailed workers to offer reassurance, but is this the best or only way to support staff during this period of uncertainty?

In offices around the UK, Friday 24 June was not the most productive. Many staff had stayed up all night to watch events in the EU referendum unfurl; others had woken up in shock to find that a slim majority had voted in favour of Britain leaving the EU.

What does the UK’s vote to leave the EU mean for HR? Despite the uncertainty surrounding the terms of Britain’s exit, you should start preparing for the HR aspects of running a business outside the EU.

XpertHR’s live 60-minute webinar will look at the implications for HR, the outlook for employment law, and the next steps in the Brexit process.

But for staff in companies that trade heavily in EU countries, or with large numbers of non-UK EU citizens, that drain on productivity came not just from shock or constantly refreshing news feeds to see the latest political surprise, but from real concern that their jobs could be at risk.

Jamie Dimon, chairman and chief executive of J. P. Morgan, was quick to address concerns, sending out a memo that very Friday to its 16,000 UK employees. “Regardless of today’s outcome, we will maintain a large presence in London, Bournemouth and Scotland, serving local clients as we have for more than 150 years,” it read.

But the memo did not shy away from the fact that there could be unpredictable times ahead, continuing: “In the months ahead, however, we may need to make changes to our European legal entity structure and the location of some roles. While these changes are not certain, we have to be prepared to comply with new laws as we serve our clients around the world. We will always do our best to take care of our people and do the right thing during times of change.”

A number of other employers have done the same, including RBS and Lloyds. Rolls-Royce, which was one of the organisations to lobby employees to back the remain campaign in the weeks running up to the referendum, sent a further memo to staff saying: “Although this is not the outcome the company would have chosen, Rolls-Royce remains committed to the United Kingdom where we are headquartered, directly employ over 23,000 workers and where we carry out a significant majority of our research and development.”

So if managers are looking to HR to support them in reassuring staff, what’s the best way to approach this? Peter Cheese, the CIPD chief executive, warned against “hasty decisions or knee-jerk reactions” either from government or employers, so rushing off a badly worded communication is not an option.

“It’s absolutely not too late to send something out,” explains Eugene Farrell, head of trauma support services at AXA PPP. “The decision has caused a considerable amount of anxiety for many people and they’re only now starting to consider what the bigger questions might be.”

Farrell adds that those concerns might not just be limited to employment status or potential redundancies, but any number of knock-on issues such as the impact of Brexit on housing prices or members of the family working abroad in EU countries. The decision may have also inflamed any differences of opinion, which may boil over in the form of office banter.

Either way, the message should be the same: nobody really knows what will happen, but we’ll tell you once we do. John Salt, sales and marketing director for Totaljobs, says making this clear should be a priority. “There are still many unknowns, but it’s important for employees to hear from their employer in a reassuring, calm manner, that nothing will change in the short term,” he advises.

“For EU passport holders, one-to-one conversations can be welcome, especially at a time when they may be feeling particularly vulnerable after the result of the referendum.”

One thing organisations should avoid at all costs is over-complicating the changes by introducing a web of new processes and bombarding employees with information on them.

“Ruthless prioritisation is a good way to start this process of simplification. It creates clarity for yourself and others on what to focus on and, perhaps more importantly, what not to focus on, in order to enable action in times of complexity and uncertainty,” says Simon Hayward, CEO of Cirrus Connect, a leadership consultancy.

“Set clear priorities for the business and for your leadership team, so that everyone can then focus on doing fewer things better.”

As well as any overarching corporate communications, it’s crucial to equip line managers to respond to questions or concerns over the impact of the referendum decision. They need to stick to the facts during these discussions, however, even if they are thin on the ground at present.

“Communication should only reflect the current situation, the challenges it presents to the organisation and the management response,” warns Benjamin Black, director of HR consultancy Blacklarke Consulting.

Aliya Vigor-Roberston, founding partner of consultancy JourneyHR, points out that this can feel frustrating, but will ultimately avoid confusion. “This considered approach takes time, and as a result, it may be difficult for managers to offer concrete information to their staff in the short term, potentially creating an unsettled working environment.

“Establishing trust between employer and employee is essential and will ensure a safe environment in which any post-Brexit questions or concerns can be voiced.” One option is to offer regular “surgeries” or Q&As, as new information emerges.

A further issue to be wary of post-referendum is how emotive the decision has been for many employees, and with that the potential for opposing views. John Hackston, head of research at business psychologists OPP, says it’s important to remember that staff are “not just cogs” and will have been affected by the vote in different ways.

He says: “In many organisations, over half will have been ‘remain’ voters, and may be going through the early stages of the grief cycle – shock, denial, or anger. Others may be ‘leave’ voters who are suffering from buyer’s remorse.”

“All of these factors may mean that many employees are more suspicious and cynical or less accepting and narrowly ‘rational’ than normal, so it is important that communication is put together very carefully.”

Nic Soret, head of employment law at Natwest Mentor, adds: “Given the reported rise in post-referendum ‘hate crime’, employers should also do all they can to ensure their people are not subject to any bullying or harassment because of their nationality or national origin within the workplace.”

“In terms of communications, employers with significant numbers of EU and other foreign nationals on their staff should be reiterating the company’s policies and attitude towards any form of bullying or harassment on racial or ethnic grounds.”

Dan Peyton, managing partner of law firm McGuireWoods’ London office, warns against organisations sending out “empty messages”, however. He says: “Simply saying we’ll do what we can and it’s business as usual for the time being is not the most valuable message to send.”

He adds: “The principal risk is not to misrepresent what you can and can’t do, or overcommitting to a point where that message could be used to back up an unfair dismissal, discrimination, or breach of contract claim in the future.”