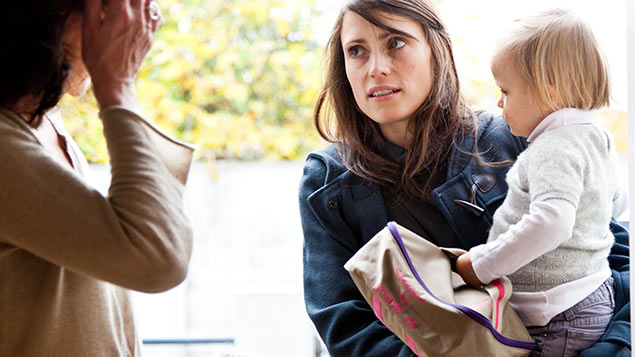 For many parents of a newborn, the support from grandparents is vital – whether as a provider of advice (“that’s absolutely normal” / “you should get that checked out”), encouragement (“you’ll sleep again one day”), or more practical support (“I’ll look after the baby for a bit to let you get some sleep”).

Often, grandparents play a key role in childcare arrangements when parents return to work – more than a quarter of families where both parents work rely on some grandparental care.

So it absolutely makes sense to look at what changes need to be made to help families in the widest sense. As a minister last summer, I extended the right to request flexible working to all employees, to remove the stigma and division evident in some workplaces where only one group of employees had this right.

This change made sure that people can ask for different working patterns to enable them to spend time looking after grandchildren, or coaching the local football team, or training for a marathon, or whatever reason they have for wanting to work in a different way.

It became clear to me that the incoming Government would need to review employment protections for carers more generally. It won’t be easy to create the flexibility needed to respond to the varied situations in people’s lives.

How can workers be best supported to negotiate a leave of absence to deal with family illness? What is the best way to handle emergency requests? Who can prescribe a fixed time for bereavement leave? Yet we do need to find answers if our workplaces are to function effectively.

Yesterday was exactly six months after the introduction of shared parental leave – far too little time for it to have become an established and entrenched part of the new parenting landscape.

When the legislation was being debated in Parliament we looked carefully at extending leave to non-parents, and rejected that change for good reasons. If it is no longer to be about developing parental bonds, then why draw the line at grandparents? Shouldn’t leave then be shareable with aunts, uncles or friends?

Important though other carers and relatives are, parents have a unique role in a child’s life.  Shared parental leave is also about addressing the historical lack of workplace provision for men to fulfil their roles as fathers.

Traditional stereotypes of dad as breadwinner and mum left holding the baby are persistent and hard to shift. Our culture still presents babies as a woman’s domain – from official forms to advertising imagery to mother and baby groups. This creates barriers for dads seeking to be every bit as involved in parenting as mums.

Traditional stereotypes of dad as breadwinner and mum left holding the baby are persistent and hard to shift. Our culture still presents babies as a woman’s domain”

Shared parental leave has the potential to start the process of breaking down these barriers, enabling both parents to be fully involved in parenting from the start. Many men say they are concerned that taking shared parental leave will have a negative impact on their career. Challenging these barriers and driving take-up of leave amongst men is important – and it needs leadership from Government.

Sadly the Conservatives blocked Liberal Democrat attempts to extend paid paternity leave as part of introducing shared parental leave. Designating a bigger chunk of parental leave for fathers has been a key part of Scandinavian success in enabling dads to be more involved.

There is a real risk that cultural and economic factors combined with this grandparental leave policy will mean fewer fathers take parental leave than would have done so.

This also fails to solve the other pressing part of the childcare problem, which is the gap in support for working parents. Paid parental leave ends by the time the baby is nine months old. The free 15 hours a week of early years education doesn’t start until the child is at least two years old, and not until three years old for 60% of families. Instead of planning to double this to 30 hours a week, the Government might have looked to close this gap in support for working families.

By all means extend support for grandparents, just don’t make it harder for dads to play their important role.

Jo Swinson is non-executive director of Clear Returns and a consultant on workplace diversity. She was formerly minister for employment relations and the Liberal Democrat MP for East Dunbartonshire.
View all posts by Jo Swinson →
Previous Article
Next Article