By Jo Faragher on 21 Mar 2017 in HR transformation, Employee engagement 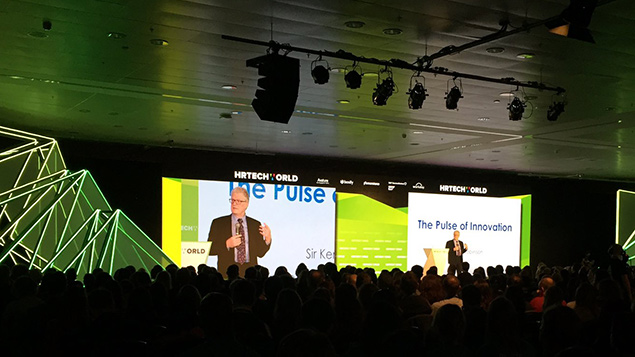 HR’s mission is to understand where talent lies in the organisation and cultivate the conditions in which it can thrive, said Sir Ken Robinson in his opening keynote for the HR Tech World London conference.

The renowned author on creativity and innovation said that HR had been seen as an “ancillary part of the business for so long”, and that it could be the main driver in building a culture that innovates and is successful.

He told delegates: “We have the resources to solve problems but often we don’t know where they are in the organisation. We set up creative departments, but this suggests that other people are not. In my experience, creativity is everywhere in the organisation. It’s the HR function that feeds into the imperative to innovate.”

“The world around the company was changing, but the world within it was not. If the internal culture of an organisation does not adapt to the external culture, it is like a plant and it will eventually die,” he said.

In order to drive a culture where innovation thrives rather than being stifled, Sir Ken called upon HR to challenge misconceptions that only special people are creative or that creativity is about having certain abilities.

“We need to promote active collaboration. So many people think they’re not creative because of the way we operate cultures,” he added.

HR’s job, he concluded, was to “mine” the human talent within the organisation and create the right environment where it can flourish.

Human resources are like natural resources, you have to go and find them, cultivate them, refine them. If you do this you find that people are capable of extraordinary things”

“Human talent is highly diverse and it’s often buried. Human resources are like natural resources, you have to go and find them, cultivate them, refine them. If you do this you find that people are capable of extraordinary things,” he said.

Central to HR’s success in doing this will be to demand a new style of leadership: “It has to involve the whole community to get the benefit from it, a system of leadership where we cultivate everyone’s talent, not just those in special departments.”

Thinking of organisations as organisms, rather than mechanisms, will help to support this mindset, he added.

“We think of organisations as mechanisms, that they’re impersonal, but they are more like organisms and if they have a synergy with their environment they thrive. We operate management charts that look like technical drawings. They tell you nothing about the culture of the organisation or what it’s like to be there.”